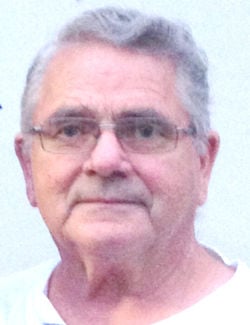 Larry S. Gilbert Sr. WOODBURY — Larry S. Gilbert Sr. of Woodbury, Vermont, unexpectedly passed away Tuesday, Feb. 4, 2020, at his home. Larry was born Nov. 15, 1945, to Francis and Melba (Goodyear) Gilbert in Northfield, Vermont. He was the youngest boy of nine children. He moved to Woodbury as a young child and attended school at Woodbury Elementary and Hardwick Academy. He served his country in the U.S. Navy from 1965-1969, doing two tours in Vietnam. He married Beverly Travers in 1967 and had his daughter, Karen, and son, Larry Jr. After being honorably discharged in 1969, he returned to Woodbury and began his career as a lineman at Washington Electric Cooperative in 1971. Larry later married Elaine Fournier in 1989, gaining four daughters, Shannon, Monique, Kelly and Renee. He retired from Washington Electric in 2000. Larry truly enjoyed spending time with his many grandchildren and great-grandchildren offering them “mouses” when he saw them and his two grand-dogs, Kona and Marley, whom he greeted with treats with each and every visit. He was fulfilled by visits with his friends and hosting a ‘Liar’s Club’ meeting every morning and making his pickled eggs for all of his friends and family with hunting camps or sugar shacks. He took pride in his green ‘56 Chevy truck and his red convertible Mustang that many would see him driving around in, weather dependent. He was known to many as Grumpy, Grandpa or Pop-Pop. He was a well-known and well-loved man who will forever be missed. He is survived by his brothers, Jerry (Arlene) and Lindy (Sherrill), and sister, Connie; his daughter, Karen (Wayne) Symonds, and son, Larry (Kristin) Gilbert; his daughters, Shannon (Brian) Bailey, Monique (Dennis) Baril, Kelly (Dave) Fournier and Renee (Jon) Bilodeau. He is also survived by grandchildren, Jessica (Tim) Symonds, Andrea (Patrick) Symonds, Josh (Lauren) Gilbert, Nathan Gilbert, Ryan (Megan) Kreis, Caitlyn (Steven) Surprise, Marah Kreis, Jessica (Hank) VanOrman, Caitlin (Chris) Hull, Brian (Elizabeth) Bailey, Danielle (Joe) Bayne, Michael (Hilary) Baril, Ashley (TJ) Stanley, Elizabeth (Jason) Cote-Wong, Tyler (Doug) Bilodeau, Evan (Abbey) Bilodeau and Josh Bilodeau. He is also survived by 16 great-grandchildren and many nieces and nephews. He was predeceased by his mother; his wife, Elaine; his brother, John, and sisters, Nancy, Carol, Cathy and Barbara. In his honor, an informal (potluck) gathering will be held at the Hardwick American Legion Post #7 on Sunday, Feb. 16, 2020, at 1 p.m. A graveside service with military honors will be held on Saturday, June 20, 2020, in the South Woodbury Cemetery. In lieu of flowers, donations in Larry’s name may be made to the American Legion Post #7 in Hardwick; or the VFW Post #790 in East Barre. Online memories and condolences may be conveyed at dgfunerals.com. The des Groseilliers Funeral Home is in care of arrangements.

Many fond memories of Larry around town, in the Fire Fighter's Day parades, coffee at the store or just seeing him at the post office. I will miss seeing him and his crew hanging out in the doorway of his garage all summer! My sympathy to the family. Larry was one of the good guys, and he will be missed.