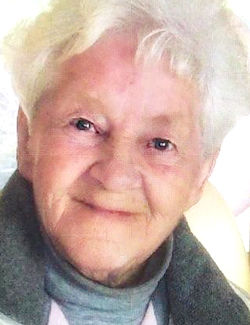 Julia Ann Schafer SOUTH WOODBURY — Julia Ann Schafer of East Hill Road passed away on Saturday, Jan. 4, 2020. Born May 7, 1936, in South Washington, she was the daughter of Chester Arthur and Lila Eva (Morse) Kezer. Julie attended schools in South Washington, East Barre, Barre City, and joined the Women’s Army Corps in 1955. She married Korean War veteran, Alexander Schafer, in Hopewell, Virginia. Both were stationed at Fort Lee, Virginia. After they wed, she became an Army wife and joined him in Germany where he was stationed. In 1960, her daughter, Cheryl Anne, was born in Heidelberg, Germany; in 1962, her son, Michael Shannon, was born at Fort Knox, Kentucky; and her youngest daughter, Sandra Gayle, was born in Berlin, Vermont, in 1970. After her military service, Julie worked in area nursing homes as an aide, as a dispatcher for Rinker’s Communications and as a secretary for the State of Vermont in the Social Welfare, Education and Banking, Insurance and Securities departments. Following her retirement from the State of Vermont in 2000, she was employed by Riverbend Country Store and later by David E. Rogers Contractor. Julie loved her home and flower gardens, and enjoyed writing, publishing five books of poetry. She was an avid photographer. She also enjoyed genealogy, tracing her roots back to the Revolutionary and Civil wars. She was a member of the Daughters of the American Revolution where she served as state chairman for the Veterans History Project and Project Patriot, as well as serving three years as state chaplain for the Vermont DAR. She was a member of the American Legion Post #10 in Barre. Julie also enjoyed working with Faith in Action, which sponsored a Senior Group, and sang in the church choir at the South Woodbury Church. Survivors include her daughter, Sandra, six grandchildren, six great-grandchildren and many nieces and nephews. In addition to her parents, she was predeceased by her daughter, Cheryl Anne Schafer Alden, who passed away on Jan. 10, 2012, succumbing to cancer; her son, Michael Shannon, who passed away on Sept. 24, 2019; her five brothers Lynn, Miles, Ivan, Fred and Cray; and by three sisters Iris Carroll Kezer Frey, Alma June Kezer Hudson and Ila May Kezer Russell. A celebration of her life will be held on Saturday, Jan. 18, 2020, at 2 p.m. in the American Legion Post #10 in Barre with light refreshments provided. Later inurnment will take place in the Maple Hill Cemetery in Washington at the convenience of her family. In lieu of flowers, memorial contributions may be made to the American Cancer Society, Vermont Chapter, 55 Day Lane, Williston, VT 05495. The Hooker and Whitcomb Funeral Home, 7 Academy St., Barre, assisted the Schafer family with the arrangements. For a memorial guestbook, visit www.hookerwhitcomb.com.