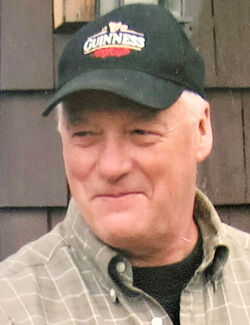 John M. Grace WATERBURY — John Michael Grace, 83, a longtime resident of Waterbury, passed away peacefully in Cape Canaveral, Florida on Monday December 19, 2022. Born in Waterbury on July 31, 1939, he was the son of the late Healy and Helene (Thibault) Grace. On October 3, 1964, he married Mary Piche in Johnson. Mary predeceased John on March 24, 2013. John was a 1957 graduate of Waterbury High School. He attended college at Lyndon State College, Johnson State College and graduated from the University of Vermont with a degree in education. He later obtained a post-graduate degree from Bowdoin College in Maine. He served his country as a member of the US Army as a medic. He began his professional career in education teaching mathematics at Harwood Union High School. He also taught mathematics at Colchester High School and later became a member of that school's administration. He concluded his long career in education as principal at Windsor High School. He also coached several sports during his time at Harwood Union High School and Colchester. He will be remembered as a loving father and brother and remembered fondly as a teacher and coach. John is survived by his children, a daughter Mary (Katy) Grace of Cape Canaveral, FL, his son Timothy Grace and his wife, Barbara, of Idaho Falls, ID; his two brothers Richard Grace and his wife, Camille, of Carlisle, NY and Steve Grace and his wife, Breta, of Duxbury and a sister Marjorie Gormel and her husband, Edmond of San Antonio, TX; as well as extended family. John is predeceased by his brother Robert Grace and sister Mary Parizo. A Mass of Christian burial will be held from St. Andrew Catholic Church in Waterbury on Saturday June 17, 2023, at 11a.m. A reception will follow in the St. Leo's parish hall. Inurnment will be in Holy Cross Cemetery in Duxbury. For those who wish, memorial gifts, in lieu of flowers, would be appreciated to the American Cancer Society at www.cancer.org . Assisting the family is the Perkins-Parker Funeral Home and Cremation Service in Waterbury. To send online condolences, please visit www.perkinsparker.com .