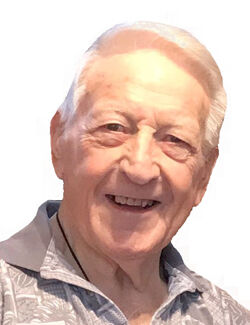 John K. Mattson BERLIN — John K. “Johnnie” Mattson, 95, of Cedar Drive passed away on Monday, April 19, 2021, at his home, with his family at his bedside. Born on Sept. 11, 1925, in Barre, he was the son of Carl and Elsa (Armfelt) Mattson. John attended local elementary schools and graduated from Montpelier High School on June 11, 1943. On May 17, 1944, he enlisted in the U.S. Navy and served as an Electricians Mate 3rd Class until his honorable discharge on April 5, 1946. On Dec. 9, 1944, he married Marjorie Eastman. They made their home in Barre. Marjorie passed away in 2013. John was employed as a supervisor at Anderson Friberg Co. until he and a business partner purchased Chioldi Granite Co. in 1960 which the family owned until 2015. His memberships included the Canadian Club of Barre and the Elks Club of Barre #1535, both of which as a lifetime member; as well as the American Legion Post #10 of Barre. He was also a Scoutmaster of the East Barre Boy Scouts. In his spare time, John enjoyed spending time with his family, traveling around camping in his motor home, playing horseshoes, swimming and woodworking. He loved inventing gadgets, playing cards and entertaining. Recently, he looked forward to his weekly “Zoom” calls with his grandchildren and great-grandchildren. He couldn’t go a day without his honey with a drop of green tea. Survivors include his daughters-in-law, Joyce Mattson of Berlin, Vermont, and Sheila Mattson of Woodbury, Vermont; his grandchildren, Jodie Rouleau and her husband, Brad, of Danville, Vermont, Jamie Mattson of Derby, Vermont, Mark Mattson and his wife, Paula, of Barre Town, Vermont, Lori Hanchett and her husband, Tom, of Henniker, New Hampshire, Brad Mattson of Barre Town, Vermont, and Karen Liimatainen of Berlin, Vermont; as well as his great-grandchildren, Ashley St. John, Alicia Atwood, Sam Mattson, Bryton Hanchett, Kirsten Hanchett, Natalie Mattson, Chloe Mattson, Ashlyn Liimatainen; great-great-grandchildren, Ava and Aiden St. John; and numerous nieces and nephews. In addition to his parents and his wife, Marjorie, he was predeceased by his sons, Kenneth and Allan Mattson; and his brothers, Carl and Robert Mattson. The graveside service to honor and celebrate his life will be held on Saturday, April 24, 2021, at 1 p.m. in Hope Cemetery in Barre. Prior to the service, family and friends may call from 10 a.m. to 12 p.m. (noon) at the Hooker Whitcomb Funeral Home, 7 Academy St., Barre. For a memorial guestbook, please visit www.hookerwhitcomb.com.