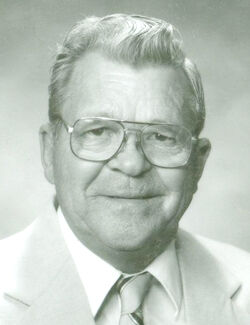 John Gauthier GRANITEVILLE — John Gauthier, 93, of Wendall Terrace passed away on Thursday, Feb. 4, 2021, at his home. Born Dec. 28, 1927, in Bedford, Quebec, Canada, he was the son of Raymond and Noella (Jette) Gauthier. His parents moved to Vermont when he was a young child. He attended local elementary schools and enlisted in the U.S. Army in 1945, serving during WWII, mostly in Panama, until he was honorably discharged in 1948. On June 23, 1962, he married Avis Weston in the St. Augustine’s Catholic Church in Montpelier. They made their home in Berlin until they moved to Graniteville in 1990. Before entering the service, John worked on several farms, notably the Brown Derby farm in Montpelier. After his discharge, he worked different jobs until going to work for “Mr. Dix” and the Barre City Public Works Department where he helped bring the start of the union. He worked his way up to become the supervisor of the public works department, working for 43 years until his retirement in 1990. He was also the administrator of the Loyal Order of the Moose for many years. John attended various churches, finally relying on Mass on television for the last couple of years. His memberships included the Canadian Club of Barre, Barre Lodge of Elks #1535, Mutuo, VFW Post #790 of East Barre and the American Legion Post #10 of Barre. He was also a very active member of the Loyal Order of the Moose – holding every local office, as well as many district offices. In his leisure time, he and his wife enjoyed over 20 years of Saturday night dances at the Moose club. He was a huge race fan and enjoyed travelling all over the country to watch NASCAR and he was a season ticket holder at Barre’s Thunder Road. He also enjoyed camping, hunting, boating, snowmobiling and watching his granddaughter play sports in school. Survivors include his wife, Avis Gauthier; his daughter, Kelly Keene and her husband, Patrick; his granddaughter, Destiny; and his sister, Beatrice White. In addition to his parents, he was predeceased by his son, James Gauthier; and his brother, Marcel Gauthier. The graveside service to honor and celebrate his life will be held at the convenience of his family, in the Berlin Corner Cemetery in Berlin. Family and friends may call on Thursday, Feb. 11, 2021, from 6 to 8 p.m. at the Hooker Whitcomb Funeral Home, 7 Academy St., Barre. Masks and social distancing required. For a memorial guestbook, please visit www.hookerwhitcomb.com. In lieu of flowers, memorial contributions may be made to Central Vermont Home Health and Hospice, 600 Granger Road, Berlin, VT 05641.