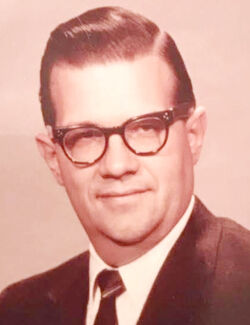 James J. Bogdanovitch RUTLAND — James J. Bogdanovitch, 88, passed peacefully on Sept. 19, 2020. James was born in Somerville, New Jersey, in 1932. He graduated from Rutgers University in 1956 and served in the U.S. Army from 1956 to 1958. He started his government career at the Social Security office in Oswego, New York. He soon transferred to the disability division of Social Security in Baltimore, Maryland, where he met his wife, Martha, of Conowingo, Maryland. They married in 1963. James led a Boy Scout troop in Maryland from 1961-1973. He continued to work at Social Security headquarters until he transferred to Montpelier, Vermont, as assistant district manager in 1973. He was involved with the Montpelier school board, as well as continuing to volunteer with Boy Scouts. From 1979-1983, James served as council commissioner for the Green Mountain Boy Scout Council and received the esteemed Silver Beaver award for lifetime service to the Boy Scouts. In 1980, he was promoted to district manager in Rutland, Vermont. He received many merit awards from Social Security and retired from the government in 1988. While in Rutland, he continued to volunteer with Boy Scouts. After he retired, he worked as a volunteer at the Open Door Mission in Rutland cooking for the soup kitchen, as well as a volunteer at the Rutland hospital. He is survived by Martha, his wife of 57 years; daughter Mary; son Christopher and wife Jennifer, and their three daughters, Sophia, Eva and Lydia. James loved his family deeply, especially his granddaughters. For those who wish, contributions in his memory can be made to The Rutland Open Door Mission Soup Kitchen.http://gregorycremation.com/blog