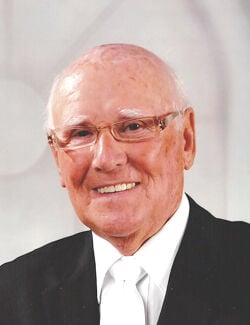 James E. Ouellette SUN CITY CENTER, Fla. — James Edbert Ouellette, 84, formerly of Sun City Center, Florida, passed away peacefully on April 13, 2021, surrounded by his family following a brief illness. Jim was born Aug. 10, 1936, to Ludger and Anne Ouellette in Van Buren, Maine. He was a beloved son, husband, brother, father and friend to so many. Jim was a devoted husband to his wife, Renee, and an amazing father to his children, Tammy, Gail, Brian and Sandra. Jim was a music enthusiast who enjoyed playing the piano, organ and keyboard, filling his family home with the sweet sound of organ music while his wife. Renee. sang along. He enjoyed family vacations, the local NASCAR circuit, snowmobiling, skiing, gardening and decorating, but his true passion was his family. Jim had an uncanny ability to spread cheer and find happiness in daily interactions, and for the last two years of his life, enjoyed pampering his beloved dog, Brady, with daily golf cart rides. After graduating from Van Buren High School, he began studies at Husson College and then at The New England College of Optometry. Leaving early to honorably serve his country, Jim joined the Army and was stationed at Fort Sam Houston in San Antonio, Texas. He married the love of his life of 62 years, Renee Mae Beaulieu, on Dec. 27, 1958. Following an honorable discharge, he completed his education at The New England College of Optometry in Boston and began a private practice of optometry in Vermont where he and his wife, Renee, raised their four children. He was an active member of his church and numerous community organizations such as the Lions Club, Knights of Columbus, Elks Club and the Canadian Club. Jim and Renee retired to Florida and spent their early retirement years RVing with family across much of the United States, visiting with family and making new friends wherever their travels led. Jim thoroughly enjoyed people and throughout his retirement years, sought out opportunities to meet and visit with people, including many years as a security guard greeting residents and visitors at his retirement community of Kings Point of Sun City Center. Jim will forever be remembered for his infectious smile, generous heart and warm embracing hugs. Jim was predeceased by his parents and three siblings, Ronald Ouellette, Tom Ouellette and Marcella Scribner. He leaves behind his wife, Renee; daughter Tammy and her husband, Ray Frieberg, daughter Gail and her husband, Ken Tully, son Brian and his wife, Beth Ouellette, and daughter Sandra Racine. He leaves behind 11 beloved grandchildren, Bradley (and his wife, Audrey), Kimberly and Nathan Frieberg, Jason (and his wife, Laura) and Brandon Tully, Cameron and Savanna Ouellette, Ashley Coomes, Dustan and Taylor Whitcomb and Krisalyn Racine; six great-grandchildren, Oliver and Patrick Frieberg, Joshua and Anna Tully and Addison and Jack Coomes; and his beloved sister, Maxine and her husband, Gerald Charette. Funeral arrangements are being coordinated by National Cremation in Ruskin, Florida. Services will be held at Prince of Peace in Sun City Center, Florida, on Tuesday, June 8, 2021, at 11 a.m. In lieu of flowers, donations may be made to the Barre Lions Club, Sight and Hearing Fund, P.O. Box 211, Barre, VT 05641.

Sending my thoughts and prayers to the family. Wishing you all peace - love and great memories. Take care and let the memories live in your hearts forever!! Elizabeth

Deeply saddened by the loss of a great person who loved his family very much. My love,thoughts,prayers and heart goes out to all of u at this time. Ray