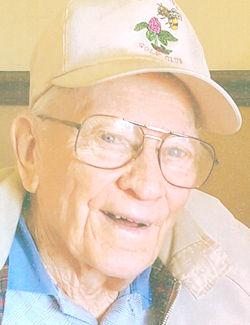 J. Stanley Moran BARRE — J. Stanley “Stan” Moran, 94, of Cedar Cliff passed from life on Earth on Saturday, Feb. 8, 2020, joining his wife of 73 years. Born March 6, 1925, in Washington, he was the son of James and Una (Bohonnon) Moran and the oldest of four. Stan attended local Barre schools. A brilliant student, he also excelled in sports – lettering in football, baseball and skiing. He even went to Switzerland with the ski team to compete. After graduation, he was drafted into the U.S. Army, serving 11 months stateside before serving as a Army Combat M.P. for two years in Europe. He was honorably discharged in June of 1946. Later that same year, he met Madyne Ida Veno whom he married on Oct. 27. They made their home in Barre in the house he designed, and they finished together. Madyne passed away in August of 2019. Stan was employed with Jackson Dairy as a wholesale delivery driver in central Vermont for 19 years and then went on to become a supervisor for the next 10 years. After the dairy closed, he and Madyne purchased a Duraclean-rug and upholstery cleaning business-franchise which they ran until they retired in 1985. For the next 18 years, Stan and Madyne wintered in Florida – where they fished, biked, bowled, golfed and filled their time together with as many other activities as time allowed. They had a large group of close friends. Stan was also a pitcher for the Granite City League for years and taught his sons baseball when they were young. He was also a member of the Barre Horseshoe League and Republican Party. Stan was a free thinker, a man who often wrote editorials to The Times Argus. Survivors include his son, Jon of Woodbury, grandson Travis and wife Christina and their children, Hunter and Olivia, of Washington; his daughter-in-law, Gerri, grandson Chris and wife Karen and their son, Rowan, grandson Rob and wife Nicole and daughter Mollie, all of Barre; and grandson Brian of Burlington; former daughter-in-law, Donna of Barre; his brother, Ted of Browns Mills, New Jersey; and his sister-in-law, Kathleen Moran of Williamstown; as well as many nieces and nephews. In addition to his parents, he was predeceased by his wife, Madyne; his son, Michael; his brother, Alan; and his sister, Marilyn Giacherio. The graveside service to honor the lives of both Stan and Madyne will be held in the Maple Hill Cemetery in Washington at the convenience of the family. The Hooker and Whitcomb Funeral Home, 7 Academy St., Barre, assisted the Moran family with the arrangements. For a memorial guestbook, visit www.hookerwhitcomb.com.