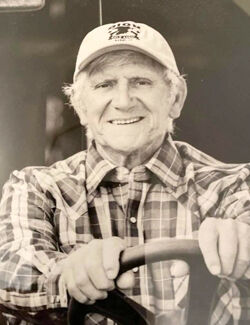 Guy P. Dion BERLIN — Guy Patrick Dion, 85, passed away on Thursday, Feb. 11, 2021, at his home on the family farm with loved ones by his side. Guy was born March 17, 1935, on the family farm. He was the son of Adrien Dion and Camilla (Chaloux) Dion. Guy graduated from Spaulding High School in 1953. He then served in the Vermont National Guard. He owned and ran Dion Motors on Brook Street in Barre for many years. In 1988, he moved the business to Berlin to the family farm. Guy was an avid sportsman, he loved hunting, fishing, boating and snowmobiling. He took many extended trips to his home in Kenai, Alaska. He enjoyed his “big toys” and working around the farm. Cutting wood with his son, Mark, was a yearly activity for many years. Tapping trees was a spring event because “everything tastes better with maple syrup.” Friends and family were always invited to the challenge of a game of cribbage! In the past few years, his greatest joy was mowing the grass and riding his Polaris Ranger (mule) looking for wildlife. Guy is survived by his life partner, Cora Joeckel, and her three children, Colleen Smith, Karen Joeckel and Craig Joeckel (Terry); his former wife, Jean Richardson Farrar, and their five children, Martha Hall (Stu), Mark Dion (Michelle), Milan Dion, Marlene Doyon (Mike Reardon) and Michelle Hayes (Glenn); his brothers, Ronald Dion (Denise), Robert Dion (Joyce). He was loved by his many grandchildren, Jeremy, Jesse, Melissa, Monica, Jamison, Beth, Melinda, Brett, Nicholas, Jennifer, Jenna, Emily, Hannah, Andrew, Alex and Adam, and many great-grandchildren and extended family as their “Papa.” He was predeceased by his sister, Jeannine (Tom) Abare; and his parents, Adrien and Camilla. The family would like to give a special “thank you” to all his friends at the Mutuo for their companionship and friendship. To honor the wishes of Guy, there will be no calling hours. A graveside service will be held in the spring at the convenience of the family. Arrangements are in the care of the Pruneau-Polli Funeral Home, 58 Summer St. in Barre. Those wishing to send online condolences may do so at: www.pruneaupollifuneralhome.com.

Charlotte and I are very sorry to see that Guy has passed on. I have fond memories of Guy helping me with the foundation for a new screen porch on my house 30 years ago. I even bought a few card from him over the years we lived on Vine St. Our sincerest sympathies go out to the family.