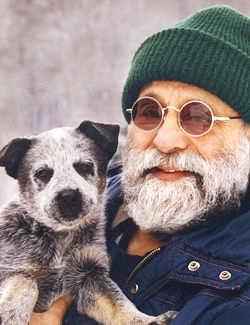 Gerard W. Rinaldi CHELSEA — Gerard W. Rinaldi stepped away from this mortal coil in the early morning hours of Jan. 2, 2020, at the age of 83. A teacher, artist, father, soldier and poet, Gerard, son of Angelo (Scorpie) and Carmenella "Nellie" Rinaldi (née Sabia), grew up in Stamford, Connecticut, and graduated from Saint Basil’s School, 1954. A graduate of Boston University, Gerard went on to get a master’s degree and later a Master of Fine Arts. A one-man art show was reviewed by The New York Times in 1979. After college, he enlisted in the U.S. Army where he graduated from OCS as an officer and a member of the elite Special Forces, one of the earliest Green Berets. He saw a tour in Vietnam in 1962 before it became an official conflict. Gerard married Vaughn Ann Schmidt in 1963 and together, they raised their son, Seth David Rinaldi, in Stamford, Connecticut. Gerard’s three primary life passions were art, teaching and being a father. He spent his entire life creating, producing and practicing art in many mediums. His teaching career spanned over 35 years, most of which was spent as art department chair at Byram Hills High School in Byram Hills, New York. There, he interacted with thousands of high school kids, making an indelible mark with his mix of creativity, interdisciplinary education, existentialism, conceptual art and an open-minded acceptance of others. Gerard embraced the works of Samuel Beckett, Donald Judd, Sol Lewitt and many, many other authors and artists. His desire to inspire curiosity was always on display, whether it was showing his students Waiting for Godot, Apocalypse Now or Bergman’s The Seventh Seal, he would always search to find new and innovative ways of connecting with students to share art, culture, music, film and literature. Upon his retirement from teaching and fed up with a suburban lifestyle, Gerard and Vaughn moved to Chelsea, Vermont, in 1993. Gerard defiantly said, “That’s it, I am never going south of White River Junction again.” (With one possible exception, he held to that.) He will be remembered for his sharp, sardonic, intelligent wit, his intensity and depth of interest in the eclectic and eccentric, a love for old machinery, especially motorcycles and antique tractors, and a deep appreciation for nature, specifically, snow. Gerard is survived by his wife, Vaughn Ann Rinaldi, of Chelsea; son Seth Rinaldi and wife Andrea Fischer of Ventura, California; his brother, Dr. Robert Rinaldi and wife Louise Rinaldi of Chelsea. In lieu of cards and flowers, please consider a donation to www.vermontartscouncil.org. There will be a celebration of Gerard’s life later in the year. Email SDRinaldi68@gmail.com to be put on the list for updates. “Ever tried. Ever failed. No matter. Try Again. Fail again. Fail better.” - Samuel Beckett