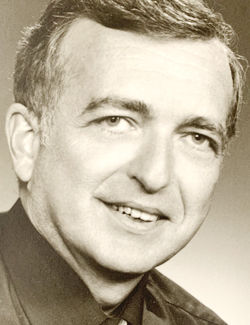 Gerald Ray McNamara BARRE TOWN — Gerald Ray “Gerry” McNamara passed away peacefully on Saturday, June 27, 2020, at the home of his daughter, Kelley Avery, surrounded by his family. Gerry was born in Claremont, New Hampshire, on April 16, 1941, to George and Alice McNamara. He attended schools in Claremont, graduating from Stevens High School in 1959. Upon graduation, he enlisted in the U.S. Air Force, serving as an Aircraft Control and Warning System Operator for radar installations in Othello, Washington, Romanzof, Alaska, and Great Falls, Montana. In 1963, Gerry was transferred from active service to the Air Force Reserve and was honorably discharged in June of 1965. Following his military service, Gerry worked as an operator for Philco-Ford where he saw assignments at U.S. Air Force radar and satellite tracking stations in New Boston, New Hampshire, and Thule, Greenland. On April 15, 1967, he married Therese “Terry” Kelley in St. Johnsbury, Vermont. His brother, Arnold, stood as his best man. In June of 1970, Gerry enlisted in the Vermont State Police where he completed his training at the VSP Academy in Pittsford before spending the next six years as a radio dispatcher. In May of 1976, he accepted a position as a motor vehicle examiner with the Vermont Department of Motor Vehicles (DMV), beginning a career that would last over 33 years. During his time with the DMV, he worked in a variety of positions, including highway use inspector, motor vehicle inspector supervisor, education and safety chief, and his final position as the DMV chief inspector from which he retired in 2004. Gerry’s family moved in parallel with his positions with the DMV and made their homes in St. Johnsbury, Wallingford and Barre Town. After a few years of retirement living in Vermont, and a lifetime of shoveling snow, Terry and Gerry made the decision to move to Sun City, Arizona, in 2012, where they made their home for the better part of eight years. Health issues in their later years in Arizona caused them to move back to Vermont where he and Terry stayed with their daughter, Kelley, her husband, Steve, and family. Gerry had an easy smile, a fierce devotion to his family and friends and a lifelong love of music starting with playing violin in his high school orchestra. He was also a proficient piano player, and the McNamara household was always filled with the sound of music. He was predeceased by his parents, George and Alice McNamara; his sister, Janice (Fitanides); and stepsisters, Marilyn and Jean. He is survived by Terry, his wife of 53 years; daughter, Kelley (Avery) and husband Steve of Barre, Vermont; three grandsons, Shawn, Kevin and Matthew Avery of Barre, Vermont; brother, Arnold and wife Nancy of Mason, New Hampshire; and cousins, Corinne Nash and Loretta Ball. Gerry’s list of friends is endless, but he was especially close with Raymond and Anna Pouliot of Sun City, Arizona, and Paul and Tanya Taylor and family of Barre, Vermont. There will be no calling hours. Funeral services will be held Saturday, July 11, 2020, at 11 a.m. at St. Monica Church in Barre (masks are required). Interment will take place later in the year in Plainmont Cemetery in East Montpelier. The family sends its heartfelt thanks to all who visited, called, brought food and provided so much love and compassion in Gerry’s last days. Thank you to all the staff at Central Vermont Home Health and Hospice, with a special thanks to Bonnie Breer. In lieu of flowers, donations may be made to the American Cancer Society. Arrangements are in the care of the Pruneau-Polli Funeral Home, 58 Summer St. in Barre. Those wishing to send online condolences may do so at: www.pruneaupollifuneralhome.com.

Sad news, Jerry was a true professional who was a valued DMV team member and just a very nice person. Hoping my deepest sympathy brings you comfort in some small way.

I had the good fortune to work with Gerry at DMV. He was a true professional and was well respected in the Law Enforcement Community.

He was extremely proud of his family, especially his three grandsons.

Our sincerest sympathies to Terry and her family.

Terry and Jerry were our neighbors on Owen Drive in Barre; and my son, Christopher's, first 'best friend'. Whenever Jerry would start up his riding lawnmower, Christopher would streak across the road for a ride - and not want to come home! Eventually I sent him over with the oven timer; and when that went off, he was to come home - until he quickly learned how to reset the time which Jerry got a kick out of. It was their 'secret'. Jerry was so wonderful and patient with Christopher listening to him chatter away when all he wanted to do was get his lawn mowed. I will always cherish this memory of Gerry and Christopher and Gerry's patience and kindness. Jo Ellen Pirie, Hampton Beach, NH