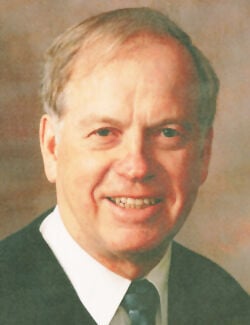 George V. Larose BARRE — George V. Larose, 86, a longtime resident passed away peacefully on Friday, Jan. 8, 2021, surrounded by his loving children. Born on Nov. 19, 1934, in Montgomery, Vermont, he was the fourth of eight children to Paul and Blanche (Smith) Larose. George graduated from St. Michael’s High School in 1952; he was awarded a medal in mathematics. After high school, he worked as a meat clerk before joining the Army in 1956, serving in Germany and finishing his military service in the National Guard. After his military service, he worked for First National Supermarkets at several stores becoming produce manager then meat manager until the stores closed in 1988. He then worked for Hannaford Supermarkets until he retired at age 79. He was a hard worker - he enjoyed his work and the people he met. He liked to joke around and was always smiling and laughing. He was a loving, supportive and selfless father and grandfather. He attended many sporting events, concerts, dance recitals and graduations for his children and grandchildren across New England. He was a religious man, an avid gardener, a sports enthusiast (especially the Boston Red Sox and the Boston Celtics). He was a great cook and liked playing cards, doing word jumbles, puzzles and golfing. Survivors include his four children, Michael Larose of Barre, Vermont, Cynthia Hebert and her husband, Ray, of Rochester, New Hampshire, Stephen Larose and his wife, Laura (Duff), of Princeton, Massachusetts, Hilary Brown and her husband, Jim, of Scarborough, Maine; eight grandchildren; his sisters, Rita Diego of Barre, Vermont, Jeannette Roux of Lakeland, Florida, Irene Simard and her husband, Neil, of Port Richey, Florida, and his brother, John Larose of Montpelier, Vermont; as well as many nieces and nephews. In addition to his parents, he was predeceased by his son, Paul Larose; and his brothers, Peter, Prosper and Mark Larose. The family-only service to honor and celebrate his life will be held on Saturday, Jan. 30, 2021, at 11 a.m. in the Hooker Whitcomb Funeral Home, 7 Academy St., Barre. Masks and social distancing required. For those wishing to see the service remotely, you may access it via the following Zoom link https://us02web.zoom.us/j/89618602668?pwd=a1djZTZhUDFvd1lBWGQ1Ym01QzB3dz09 The memorial graveside service will be held in the St. Rose of Lima Cemetery in Littleton, New Hampshire, in the spring at a date and time to be determined. For a memorial guestbook, please visit www.hookerwhitcomb.com.