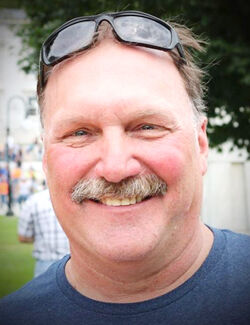 Gary Lee Megrath MORGAN — Gary Lee Megrath, 58, died July 10, 2020, suddenly in a tragic car accident on his way home. He was born on Oct. 2, 1961, at Heaton Hospital in Montpelier, Vermont. He attended Clarion Limestone High, as well as obtained certifications in HVAC and Silver Oil Burner License. He was married for 30 years to Kathleen (Buzzell) Megrath. They married on Aug. 5, 1989, at Montpelier Episcopal Church. Gary joined the United States military in 1979 and was honorably discharged in 1985. He was a self-employed contractor for many years and recently began working at Galvion, where he was a molding team member assembling military helmets. Gary loved going to the lakes around New England and seeing the ocean. He lived for riding motorcycles and enjoyed riding with family and close friends, who loved spending time with him and talking about bikes. The thing he enjoyed most was spending time with his family. He was always a kind and supportive father who consistently made time for his daughter and son. Gary was so very proud of how his kids have grown into adulthood. He always enjoyed telling everyone how good they are doing by sharing the news about his son and girlfriend’s new home and all the hard work he and his daughter have done to their home in Morgan. Survivors include his children, Adam Lee Megrath and Ashley Ann Megrath; mother, Mildred (Muzzy) Megrath; siblings, Cindy (Megrath) Gerenscer, Sandra (Megrath) Lockerby, Steve Megrath, Deborah Megrath, Harold Megrath, Sheila (Megrath) Quero, April Warren; and several nieces and nephews. His father, George Megrath, predeceased him. Gary will forever be remembered and loved by his family. Calling hours will be from 11 a.m.-12 p.m., followed by a service from 12 p.m. to 1 p.m. on Saturday, July 18, at Curtis-Britch & Bouffard Funeral Home located at 4670 Darling Hill Road, Newport, VT 05855. Contributions in Gary’s memory can be made to Shriners Hospital for Children, 51 Blossom St., Boston, MA 02114. Online condolences may be made at curtis-britch.com. Arrangements are entrusted to the care of Curtis-Britch & Bouffard Funeral Home, locally family-owned and operated.

Millie, so sorry to her of your loss. You and you family are in our prayers during this hard time. Joe and MaryAnne Cerasoli

Millie and Family, so sorry for your loss of Gary.Our thoughts are with you.