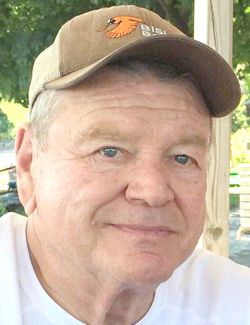 Gary H. Croteau BARRE — Gary H. Croteau passed away suddenly on Feb. 10, 2020, at his home in Bonita Springs, Florida, with his loving wife, Sharon, by his side. Gary was born on March 22, 1940, to Roger and Lina Croteau in Barre, Vermont. He graduated from Spaulding High School and Vermont Technical College in Civil Engineering. His career began with State of Vermont Highway Department, his own company, Surveyors Inc., EF Wall, and retired from Bombardier Inc. One of his most satisfying career accomplishments was building the Bonsai Pavilion and Herb Garden at the National Arboretum in Washington, D.C. Gary proudly served his country in the Air National Guard in Burlington, Vermont, and was discharged in 1969 after six years of service. Gary was a past president of the Mutuo Inc. and Kiwanis Club of Barre, Vermont. Gary and his high school sweetheart, Sharon Wildbur, shared 59 wonderful years of marriage together. In retirement, they enjoyed gardening, boating and wine making on Lake Champlain in Grand Isle, Vermont. Winters were spent in Bonita Springs, Florida, playing tennis, bocce and playing cards with longtime friends and former classmates. Gary is survived by his wife, Sharon; daughter Christine and Robert Lobel; son Craig and Jennifer Croteau; grandsons Jennings Lobel and Jake Croteau; brothers Robert and Karen Croteau, and Brian Croteau; sister-in-law Pam and Bill Christie; several nieces, nephews and cousins. Services with be held later in the summer in Barre, Vermont. In lieu of flowers, donations can be sent to Mutuo Inc. Charities, 20 Beckley St., Barre, VT 05641.

Sharon. I sent you a condolence using the name Roger instead of Gary. So Sorry

Our thoughts and prayers are with you at this time

Sharon and Family. So sorry to hear of Roger's passing. Our thoughts and prayers are with you all at this. May He rest in peace

Sharon, We are so sorry to hear of Gary's passing. We are so glad we got to see the both of you last June in Barre and got to spend some time with Gary. He was a super sweet guy, loved by all. Sandy and Dave

Thinking of you and the family. What a great picture of Gary. May Gary R.I.P.