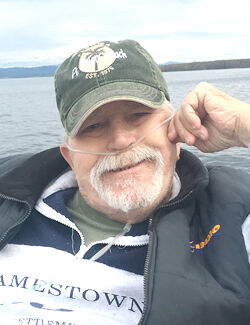 Gaetan “Butch” Morrissette ALBURGH — Gaetan Y. “Butch” Morrissette, age 81, passed away peacefully on Oct. 31, 2021, surrounded by his loving family, at his home in Alburgh. He was born in Drummondville, Quebec, on Sept. 17, 1940, to the late Henri and Germaine (Precortt) Morrissette. Butch met Irma (Paronto) and the two were married on Sept. 26, 1964. They made a home in Montpelier where they raised their three children. Butch made a career with the local telephone company and proudly retired from Verizon Telephone Co. after 32 years. Another proud accomplishment of Butch’s was the 30 years he devoted to the United States Army and National Guard. Butch continued his devotion to serving others by first being a member of the Montpelier Fire Department, then eventually retiring from the Berlin Volunteer Fire Department. He was also a member of the American Legion. It gave him tremendous joy in helping others. In his younger years, Butch continued his passion of hockey by coaching the younger generations. He enjoyed being part of the sport along with his children and their peers. Another sport he treasured was hunting and fishing. He always had plenty of stories to share about the adventures, especially those from the Norton hunting camp. After retirement, Butch and Irma traveled around the country in their fifth-wheel which gave them the opportunity to make many close friends whom they cherished. Later in life, Butch and Irma relocated to Alburgh where Butch could enjoy being at the lake to do the things he loved, which was to fish and watch the ducks and geese. Butch was also an avid NASCAR fan with undeterred devotion to the Earnhardt drivers. Throughout his life, he also enjoyed riding his motorcycle. However, there was nothing he enjoyed more than spending time with his family. He loved being surrounded by his children and grandchildren, making memories, laughs and good times. He is survived by his soulmate, Irma Morrissette, of Alburgh; his children, Stephanie Cadieux and her husband, Adam, of West Danville, John Morrissette and his wife, Leann, of Alburgh, and Matthew Morrissette and his partner, Deborah Bloom, of Worcester; grandchildren, Ashley Morrissette, Katie Morrissette and her fiancé, David Woolaver, Rylie Cadieux, Henry Morrissette and Leo Morrissette; his brothers, Gilles Morrissette and his wife, Sandra, Jacques Morrissette and his wife, Tisa; and several nieces, nephews, aunts, uncles, cousins and special friends. In respecting Butch’s wishes, there will be no public services. In lieu of flowers, donations in Butch’s memory may be made to the UVM Pulmonary and Critical Care Medicine, 111 Colchester Ave., Main Campus, East Pavilion, Level 5, Burlington, VT 05401-1473. Goss Life Celebration Homes is the area’s exclusive provider of Life Celebration events. Please visit our website to share condolences, photos and favorite memories at www.gossfs.com

Butch and Irma were my neighbors on Blackwell St. Love and condolences to you, Irma, and your family. Butch was a good soul.

Sending thoughts and prayers to you Irma and your children. Butch coached our Broomball team for a few years if I remember correctly. Oh those were the days. :) I am so sorry for your family's loss. Butch was a great guy and will be missed by many.