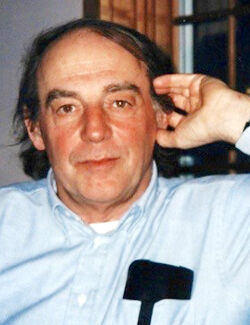 G. Richard Eisele MORETOWN — G. Richard Eisele was born on April 20, 1936, in Hartford, Connecticut, to Florence Cloutier Eisele and George Fox Eisele, joining older sister Margot. Losing his father when he was only 12, "Dick" or "Dicky" was raised by his mother, his aunt, Josephine Eisele, and great-aunts Marian Fox and Caroline Eisele. He developed a strong work ethic early in his life, but there was also time for recreation. Dick loved sports and was a capable basketball, football, baseball and tennis player. He also enjoyed many adventurous summers at the cottage of his aunts on Old Lyme Shores, Connecticut, where he would later bring his own family. As a young adult, he joined the Connecticut Air National Guard and put himself through college at the University of Connecticut, graduating with a degree in psychology in 1960. He displayed a talent in construction, serving as field engineer for well-known construction firm George A. Fuller Co. of Hartford, which erected famous Hartford landmarks during Dick's time with the firm, such as the elliptically-shaped Phoenix Mutual Life Insurance building and expansion of the Aetna Building. But it was his passion for newly-popular sport of snow skiing that ultimately led him to what would be his home for the next 55 years. Driving from Hartford to Warren, Vermont, most winter weekends of 1966 and '67 with his bride-to-be, Jean, to ski at the Glen Ellen Ski Resort, the two quickly fell in love with the Green Mountain State and knew it was where they wanted to start their family. With like-minded friends, using both their construction skills and interest in the modern architecture of Sellers and Reineke, they first built their dream communal ski house in Warren, but soon settled in Middlesex. Jean found a teaching position in the two-room Fayston School, and Dick, who had always expressed interest in being an elementary school guidance counselor, was offered a position with Waterbury Elementary School. Obtaining his Master of Education from the University of Vermont in 1971, he joined the newly-founded Community College of Vermont where he served for many years as both administrator and teacher. It was during this time when Dick fell in love with the field of adult education. His passion for teaching was obvious to his students and colleagues, many of whom expressed their gratitude for his profound guidance. Dick's assistance was also key to the growth and expansion of the young college throughout Vermont. His favorite subjects for discussion were the interconnections between science and spirituality and near-death-experiences, about which he also taught many classes through CCV. He maintained a physical lifestyle as well and was an avid roller-blader and racquetball player. Another joy of his life were his two children, Scott and Gretchen. Taking an active role in their lives, he was their devoted father, coach and mentor, and took delight in watching the development of his kids' own passions. He was an extremely proud father, never shy to tell even new acquaintances, be it in the coffee shop or on the chair lift, about his two children. In retirement, Dick continued to follow his passions for teaching, skiing, and interest in his kids and two grandchildren, Tucker and Morgan, as well as spending time most every day with his good friends at the Capitol Grounds Coffee Shop and the Co-Op Natural Food Store in downtown Montpelier. Gradually losing mobility over his last few years, Dick was assisted greatly by his daughter and spent his last few months at The Gary Residence. After a sudden diagnosis of acute leukemia in late April and deciding not to pursue treatment, he passed quietly in his sleep one week later, on May 2, 2021. He is survived by Jean Graham Eisele; their children, Scott David Eisele and Gretchen Eisele Frank; son-in-law David Frank; grandsons, Tucker and Morgan Frank; nephew Jonathan Brynga and his wife, Doreen; niece Mary Ellen Hussey and her husband, Michael; deceased nephew Christopher Brynga's wife, Denise; as well as five grandnieces and -nephews. To leave a message of condolence or remembrance, please visit the online guestbook at www.rickerfuneralhome.com.

I first met Dick at Wedgewood where I worked and it was always a pleasure to see him. I remember he always had his Red Sox cap on and years later when I would see him downtown at the coffee shop I think it was the same cap he was wearing. Always kind and respectful, Dick will surely be missed but the memories of him will always bring smiles....