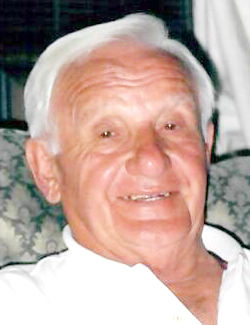 Frank J. Lanza MONTPELIER — Frank J. Lanza, 96, of 38 Terrace St., died on June 22, 2020, at Heaton Woods. He was born on Feb. 14, 1924, in Concord, New Hampshire, the son of Thomas and Carmela (Vitale) Lanza. He graduated from Concord High School in 1941. After high school, Frank attended the University of New Hampshire and on Nov. 24, 1942, while in college he enlisted in the U.S. Air Force. He was called to active duty on March 15, 1943. He and other college students took their basic training at Miami Beach, Florida. He was assigned to attend technical training at AAF Chanute Field in the state of Illinois and graduated as a Parachute Rigger. He spent 11 months at advance training of Cadets at Yuma, Arizona, before shipping out from Jackson Barracks in New Orleans, where he was assigned to the 20th Troop Carrier Squadron 6th Air Force. He joined a convoy and ended up at Panama Canal where he spent the rest of World War II until his honorable discharge on Jan. 20, 1946. It was then that he fell in love with Shirley Bonneau and was married on June 19, 1948. They celebrated their 72nd anniversary this year. Upon his return from World War II he finished his bachelor's of science degree and graduated in 1948. Frank worked as a geologist for the Magna Copper Company in Superior, Arizona, for several years before moving back to New England where he worked for the Appalachian Sulfide Company in South Strafford. He later became Vermont’s chief geologist for the Department of Transportation, where he retired after 28 years. Frank and his wife were fortunate to enjoy traveling extensively to many places all over the world. They spent their winters in New Symrna, Florida, and their summers on Lake Sunapee in New Hampshire Survivors include his wife, Shirley B. Lanza; sons, Robert W. Lanza and his wife Susan of Osprey, Fla.; and Richard Lanza and his wife Catherine of Worcester; Grandchildren, Jennifer Lanza of Lynn, Mass.; Amanda Lewis and her husband Thomas of Waltham Mass.; Ian Lanza and wife Jordan of Rawley, Mass.; Courtney Lanza of Jeffersonville; and Stacey Lanza of Brattleboro; and great grandchild, Eliza Lanza of Medford, Mass.; sister, Eleanor Hodgkins of Concord, N.H. He was predeceased by one sister, Jean Ann Talford and a brother, Thomas Lanza Jr. There will be no calling hours. A funeral mass will be held 11:30 a.m. on Friday, July 10, at St. Augustine’s Church. Those wishing to express online condolences may do so at www.guareandsons.com