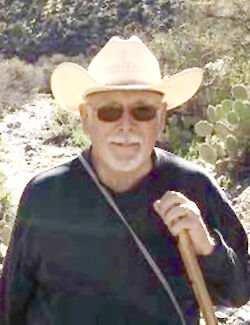 Ford Marden GOLD CANYON, Ariz. — Mr. Ford Marden, 82, of Gold Canyon, Arizona, formerly of Worcester, Vermont, beloved husband of Karin Marden, died unexpectedly July 14, 2020, in Pawleys Island, South Carolina. Ford was born April 20, 1938, in Portland, Maine. He was a graduate of Deering High School, subsequently joined the U.S. Air Force, and was stationed in Sembach, Germany, where he met his wife. Ford was an experienced arborist and enjoyed a long and successful career as a salesman. Ford was unapologetically himself, intellectually curious, politically engaged and an enthusiastic participant in many pursuits through the years, including but limited to, fishing, hunting, kayaking, windsurfing, hiking and desert trail riding. Ford was an avid outdoorsman and lover of nature. He spent many happy summer months with his family, friends, children and grandchildren on the shores of Peabody Pond in Sebago, Maine. In retirement, he and Karin relocated to Arizona where he came to feel the most at home. Ford spent countless hours in the desert on his recreational vehicle taking in the stunning vistas in the company of good friends. Ford held a deep love for, and was a fierce protector of, his family and will be deeply missed by his beloved wife of 60 years, Karin; daughter and son-in-law, Sue and David Reid of Pawleys Island; son and daughter-in-law, Ford and Jessica Marden of Chesapeake, Virginia; and grandchildren, Katie Reid Thompson, Micheal Reid and Maddie Ghi. He was predeceased by a daughter, Jill Marden. At his request, no service will be held. Please consider a donation to Folds of Honor, foldsofhonor.org, or Ronald McDonald House, rhhc.org, in lieu of flowers. Condolences may be sent to the family in South Carolina.

Karin, I was so sad to see the passing of Ford. Sending my deepest sympathy to you and the family. May he Rest In Peace. Rita Bassett

My heartfelt condolences on Fords passing.

Ford lived life on his terms and was a fond neighbor way back when.