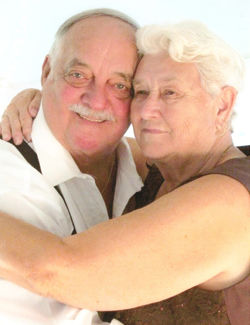 Eugene Plante WOODBURY — Eugene “Papa” Plante, 82, formerly of Barre, passed away peacefully in his sleep on Tuesday, Jan. 14, 2020, at the McClure Miller Respite House in Colchester. Born on April 13, 1937, in Barre, he was the son of Alfred and Bernadette (Frappier) Plante. Eugene graduated from Spaulding High School in the class of 1955 and joined the U.S. Army shortly after graduating high school. Upon his return from the Army, he met the love of his life, JoAnne Knutson, and they were married on April 23, 1960. Eugene worked hard for his family and spent many years of employment with Ormsby’s Appliance Store where he received multiple accolades for his work. Prior to retirement, he opened and operated Rock Appliance. Between a growing network of family and friends, Eugene’s life was full of laughter, love and rich with relationships and beautiful memories. Anyone who knew Eugene, knew that he loved life and he loved to seize every moment and make it something to be remembered. He quickly became the life of any party or gathering and was always the one to not only make you laugh, but also make you cry with his words of sincere love and encouragement. He had the ability to exemplify just how special family is and how special each and every relationship he ever had was to him. He was a devoted father of five, grandfather to five and great-grandfather to one. Survivors include his wife, JoAnne (Knutson) Plante of Woodbury; his daughters, Gina Badeau of Barre, Dianne Daniels and husband Colin of St. Albans, and Lianne Plante and partner Rex St. John of Fairfax; his son, Joey Plante and partner Joane Chaloux of Essex Junction; his grandchildren, Lindsey Ducey of Barre, Angela Macri of New York, Hilary Daniels of Colchester, Christopher "CJ" Plante of Barre, Brittany Plante of North Carolina, and Brandon Badeau of Essex; and his great-grandchild, Mavrick Ducey; his sisters, Hilmaine Stanton of Hanson, Massachusetts, Suzanne Sweeny of Winchester, Massachusetts, and Bette Anne "2P" Morrill of Barre; as well as several nieces and nephews. In addition to his parents, he was predeceased by his son, Christopher "Chris" Plante; his son-in-law, Gerard Badeau; and his brother, Simon Plante. A Mass of Christian Burial will be celebrated on Thursday, Jan. 30, 2020, at 1 p.m. in the St. Monica Catholic Church, 79 Summer St., Barre. Family and friends may call on Wednesday from 5 to 7 p.m. at the Hooker and Whitcomb Funeral Home, 7 Academy St., Barre. For a memorial guestbook, visit www.hookerwhitcomb.com. In lieu of flowers, memorial contributions may be made to the McClure Miller Respite House, 3113 Roosevelt Highway, Colchester, VT 05446. The Plante family wishes to thank them for their hospitality, assistance and support during Eugene’s stay there.