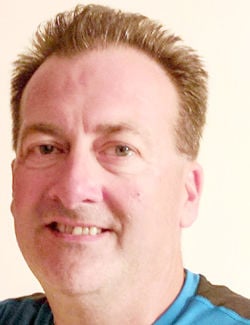 Edward S. Gilbert Jr. GRANITEVILLE — Edward S. Gilbert Jr., 52, of Middle Road passed away May 14, 2020, at his home. Born April 19, 1968, Edward was the son of Edward S. Gilbert Sr. and Louise Chaloux Gilbert. Edward graduated from Spaulding High School, class of 1986. He got a bachelor’s degree from the University of Vermont in software engineering. After college, Edward joined the Navy and was stationed on the USS Hawkbill and the USS Pogy, both nuclear-powered submarines. He did classified missions during Operation Desert Storm. He also joined the National Guard. After his service, Edward was an instructor at Norwich University in desert warfare, counter-terrorism and electronic warfare. He later was employed by Fidelity in Boston, where he worked with computers and on the team working on the first touch screen capabilities. He then became self-employed and created E.S.G. Jr. Consulting, in the cyber security field. Edward loved fishing, hunting and being an outdoorsman. His favorite thing to do was spending time with his family. He was proud to be a 4th degree in the Knights of Columbus. Besides his parents, Edward is survived by his three children, son Garrick Gilbert of California, son Brandon Gilbert of Vermont and a daughter, Ariana Lewellyn of California, and a sister, Jo-anne Hutchins of Arizona. There will be no calling hours. A private graveside memorial will be held in St. Sylvester Cemetery in Westerville at the convenience of the family. A Mass of Christian Burial will be celebrated at St. Monica Church in Barre at a later date. Arrangements are in the care of the Pruneau-Polli Funeral Home, 58 Summer St, in Barre. Those wishing to send online condolences may do so at: www.pruneaupollifuneralhome.com.

Edward Sr. and Louise, Garrick, Brandon, Ariana, and Families, on behalf of the 4th Degree Members of the Knights of Columbus of Vermont, please accept our sincerest condolences...Every Knight of Columbus is entrusted to the care of Mary, the Mother of God, and we carry the Rosary as the sign of our dedication to her and to her Son. Confident in her motherly love for us all, we entrust the soul of our Brother, Edward Jr., to her, that she may present him to her Son. As an expression of our fraternal concern and as the District Master of the 4th Degree of Vermont, I will pray the rosary of Our Lady in his honor. May God's Grace be a shining light in your hearts for those we love don't go away, they are walking besides us every day.

So sorry for your loss, prayers for you and your family. Ed and I served together on the U.S.S. Hawkbill and were roommates for awhile when we were stationed at Mare Island Naval Shipyard in California, we were good friends who just reconnected earlier this year.

Mr. and Mrs. Gilbert I am so sorry four your loss your Son and I served on the USS Hawkbill together I will miss him very much. I always looked forward to hi web casts and was routing for him in the upcoming election. Please except my deepest sympathy. Fair Winds and Following Seas shipmate. Dean Pfoutz STSCS(ss)

Ed & Lisa, So sorry to hear of your son's passing. I did not know but saw him a few time in church with the two of you. I know it is very hard to loss a child. My GOD help you on this hard road of life. Deepest Sympathy Joann & Danny LaRochelle

Mr & Mrs GIlbert, Jo-anne and Kurt, Brandon, Garrett, and Ariana: I am so sorry! My thoughts and prayers to all of you. May Eddie be at peace and rest well.