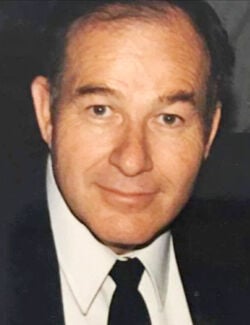 Donald I. Murray BARRE CITY — Donald Ian Murray, 83, passed away on Sunday evening, Jan. 9, 2022, after experiencing a medical emergency in Clearwater, Florida. Born on March 25, 1938, in Randolph, he was the only son of John "Jock" and Avis (Rice) Murray. He attended elementary and high school in Randolph, where his father was the school principal and later, superintendent of schools. He graduated with the last class to graduate from Randolph High School in 1956 and from the University of Vermont in 1960. Don married Carmen Carcoba in 1962 in Barre at the Presbyterian Church with Rev. Murdock Hale officiating the ceremony. He became the loving father to two daughters, Carmen Murray Neveau (son-in-law Alan Neveau), of Dayton, Nevada, and Christie Murray Keene (son-in-law Michael Keene), of Casa Grande, Arizona; and the proud grandfather of Kevin Keene, of Washington, D.C., and Dr. Kristen Keene, MD, of South Hero, Vermont. Don joined the U.S. Air Force and was a member of the Air National Guard for six years. He became an insurance agent for the Baxter M. Cummings Agency of Penn Mutual Insurance Co. in 1960. He also became a licensed real estate agent. Don enjoyed building and operating apartment housing in Barre, several of which are located on a street named after him, BroMur Street. He was a lifelong member of the Randolph Masonic Lodge (later, the Brookfield Lodge) and the Mutuo Succorso Club. He loved Florida and lived at Village on the Green II, Clearwater, Florida, for more than 20 winters, enjoying the many friendships he made in Clearwater. Don enjoyed working summers for the family business, Rice Lumber Co. in Shelburne, Vermont, as it allowed him to race his Mighty Mite speedboat up into Canada and to spend time with his cousins, John Chadwick, Skip and Bob Rice. Don was predeceased by his parents. He maintained close friendships with his cousins, Doris Portalupi and Everett "Skip" Rice; and his lifelong friends, Eugene and Elaine Shapiro. He was especially close to his nephew, Tino Broggini, of Carnesville, Georgia. A private ceremony will be held in Hope Cemetery in Barre, Vermont, for family only. In lieu of flowers, memorial contributions may be made to the John N. Murray Scholarship Fund, c/o Brian Rainville, RUHS, 15 Forest St., Randolph, Vermont. Arrangements are by the Hooker Whitcomb Funeral Home, 7 Academy St., Barre, Vermont.

I remember Don from 1989, through his wife Carmen in the workplace. Her loving devotion to him and family was evident to me and a real positive. So sorry to read of his sudden passing, but what a long productive ideas he led. A true example of the perfect husband, grandfather and friend. Sincere condolences, peace and love to Don's family and friends.

My sincere condolences to all of Don`s family on his passing. I first met Don at Wedgewood and over the years I always appreciated his so pleasant demeanor and graciousness whenever I saw him. God bless and I hope that pleasant memories of Don bring smiles to your faces......

Sorry for your loss. I was Don and Carmen's neighbors for about 10 years. They were great neighbors and wonderful with my boys. K & S Town formerly from Hillside Ave