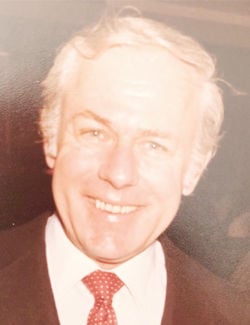 Donald F. McKnight BARRE TOWN — Donald F. McKnight, 87, passed away peacefully on Tuesday, April 28, 2020, at The Arbors at Shelburne, in Shelburne, Vermont. He had suffered from Alzheimer’s for the last few years. Born on April 16, 1933, in Barre, he was the son of Mildred (Bombard) and Howard G. McKnight Sr. He attended Lincoln Elementary School and graduated from Spaulding High School in 1951. He went on to attend the Barre School of Memorial Art. From 1953 to 1955, he served in the United States Army as an illustrator for the Airborne Department. On May 6, 1961, he married Erminia “Mini” Coletti in Montpelier. They made their home on Bailey Street in Barre before moving to their home on Skylark Terrace. She died on Sept. 20, 2011. On Feb. 8, 2014, Don married Florence “Molly” (Abare) McKnight, the second marriage for both. They resided at Don’s home on Skylark Terrace in Barre Town. Don first went to work for the Bob Young Studio in Barre as a monument artist and then for Rock of Ages in Graniteville as a monument designer. He never attended architectural school but was self-trained as an architect. He took his architectural exam with the State of Vermont in 1972. He was the only one to pass in the first year and obtained the highest marks given to anybody taking the exam. He then formed his own business, McKnight Associates, Architects. He worked on many projects during his career in Vermont, New Hampshire, Maine and New York. Locally, his architectural projects included the North Barre Manor, many projects at Norwich University in Northfield and the Wildersburg Development in Barre Town. Don was a member of St. Monica Catholic Church in Barre, and the Barre Rifle and Pistol Club, of which he was a past president and trustee. He was a true outdoorsman who loved and respected nature. He enjoyed snowshoeing, was an avid game-hunter, marksman and fisherman. For many years, he raised trout on his property, and many remember as kids walking by his home and standing on his bridge to feed the fish. Survivors include his wife, Molly McKnight; his sisters, Francese Batchelder of Rutland, Monica Hogan of Middletown, New York, and Barbara Briggs of Falmouth, Maine. He was predeceased by his wife, Mini McKnight; siblings Mary Calhoun, Genevieve Pike, Marguerite Adams and Howard McKnight. He also leaves behind many nieces and nephews, including his special niece, Barbara Heath, with whom he shared an avid love of outdoor sports, and her husband, Marc, and their family; his close friend, Fr. Leo Bilodeau; as well as many special friends. He also left behind his beloved Yorkshire Terrier, Mickey. The family would like to express gratitude and thanks for the loving care he received from the staff at The Arbors of Shelburne, Vermont. Their care and friendship surrounded and supported Don in his last year. The family requests, in lieu of flowers, donations may be made in his name to The Arbors at Shelburne, 687 Harbor Road, Shelburne, VT 05482. A graveside service to honor and celebrate his life will be held on Wednesday, June 24, 2020, at 11 a.m. in the Hope Cemetery in Barre. There are no calling hours. The Hooker and Whitcomb Funeral Home, 7 Academy St. in Barre, is in charge of the arrangements. For a memorial guestbook, visit www.hookerwhitcomb.com.