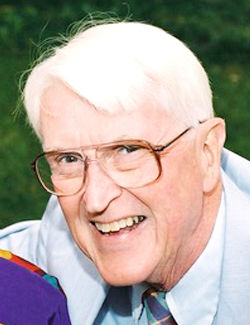 Dirk Romeyn, M.D. MONTPELIER — Dirk Romeyn, MD, passed away peacefully in his sleep on April 27, 2020, at the age of 92. He was born in New London, New Hampshire, on Jan. 9, 1928, the son of Reverend James Kingsland Romeyn and Gladys Elinor (nee) Starratt. He moved to Norwich, New York, in 1930 when his father became reverend of the First Baptist Church. After his father’s death in 1941, the family moved to Melrose, Massachusetts. He graduated Melrose High School and attended Union College before joining the U.S. Army in 1947, where he served as a Military Police Officer in Boeblingen, Germany, during the Korean Conflict. He graduated Tufts University in 1955 with a BS and Boston University School of Medicine in 1962 with an MD. In 1960, while at Boston University, he had blood drawn by Celia Cockeram, a Canadian laboratory technician, and they were married in 1961. Dirk completed his internship and residency in obstetrics and gynecology in Burlington, at UVM. He and Celia settled in Montpelier, where they raised their family and he practiced medicine at Central Vermont Hospital. He had deep respect for his many colleagues at CVH, including early partners Cornelius Granai and Steve Woodruff; and he was very dedicated to his many patients. He was an active member of the Central Vermont community, the Christ Episcopal Church and a lifelong Boston Red Sox fan. He was predeceased by his sister, Mary, and son, James. He is survived by three loving sons, Christian (Rebecca) of Glenwood Springs, Colorado; Peter (Joanne) of Durham, Connecticut; and Prescott (Karen) of Darien, Connecticut; and seven grandchildren Sydney, Connor, Eliza, Scott, Henry, Teddy and Max. In lieu of flowers, donations may be made in Dirk Romeyn's memory to the Women and Children's unit at Central Vermont Medical Center, Office of Development, P.O. Box 547, Barre, VT 05641 or online at www.cvmc.org/about-cvmc/donate

Dirk was a very important person to our family. His friendship and partnership with Ki made all of us happy and made a huge difference in Raine and Ki’s life. When he first went into practice with Ki, he stayed at our house, and he was the first adult who would tell me jokes. As an awkward, early teen he made me feel more grown up. Little did I know that he would one day deliver our son, and I especially appreciated his wit especially at that time!

I last saw him at Ki’s funeral, and I thank you for making the trip to Barre with him.

My condolences to all of you.