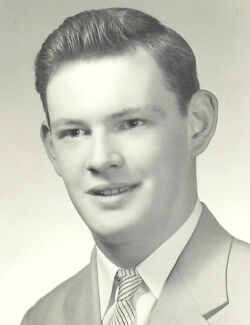 David Francis Murtagh BARRE TOWN — David Francis Murtagh, 79, of Barre Town, Vermont, passed away at his home peacefully on Aug. 29, 2020, in the presence of his beloved family. David graduated from St. Michael’s High School in 1958. In the same year, David enlisted into the U.S. Navy during the Vietnam War, where he served his country as a hurricane hunter and key punch operator before being honorably discharged in 1967. After retiring from the Navy, David began working for the State of Vermont in 1967 as a computer operator and then on to Quality Control, also for the State of Vermont, in where he stayed for 30 years. In 1968, David married his sweetheart, Diane (Fleury) Murtagh, on May 11, 1968, at St. Mark’s in Burlington. With David having been able to retire at the young age of 58, he was able to have many years free to do as he pleased with his loving family. David was a man who loved adventure and any chance he could, he loved being able to experience new things and places. He and Diane were able to go on many adventures throughout their marriage, including Paris, London, Ireland, the Caribbean, Alaska, Hawaii, Washington, D.C., and a cross-country camping trip to the western United States. One of David’s favorite places to go with Diane was to the casino. If David was not found traveling outside of Vermont, he could be found with his family on camping trips and many day trips to see family. He had a great love and passion for camping and the great outdoors. David was predeceased by his parents, Albert and Marjorie (Bedell) Murtagh; and his three brothers, Richard, Garold and Stephen. David is survived by his loving wife, Diane Murtagh, of 52 years; his two daughters, Marjorie Murtagh Trombly and husband John of Barre Town, Vermont, and Carol Murtagh and companion Dennis Beaudin of Williamstown, Vermont; his two sisters, Sandra Hopkins and husband Mike, Susan Petty; as well as two brothers, Edward and wife Hazel and Andrew Murtagh. David has four amazing grandchildren, Rebecca Anderson (New York), Michael Trombly (Barre Town), Anthony Stupik (New Mexico) and Danielle Trombly (Barre Town). David is also survived by his two great-grandchildren, Riley and Claire Anderson. Arrangements are being made through Guare & Sons Funeral Home; online condolences can be made at www.guareandsons.com. A funeral Mass will be celebrated on Tuesday, Sept. 8, 2020, at 11 a.m. at St. Monica’s Church. Please bring a mask to help follow the COVID-19 guidelines. In lieu of flowers, donations can be made to Central Vermont Home Health and Hospice.

Diane and family, I have many fond memories of working with David. I hope yours bring peace and smiles of good times past. Karen (KC)

Diane, Carol and Margie - so so sorry to hear of David's passing. My thoughts and prayers are with you now. Love, carol