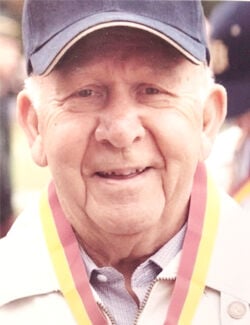 David Arthur Farr BROOKSVILLE, Fla. — David Arthur Farr, 79, died peacefully in his sleep on Sept. 2, 2020. David was born in Barre, Vermont, on May 6, 1941, son of Howard Parker Farr and Nadine Bennett. He grew up in Brattleboro, Vermont, and was active in skiing, baseball, Boy Scouts and hiked much of the Long Trail in Vermont with his father, Howard. After graduating from Brattleboro High School, he went on to earn both a Bachelor of Arts in Mathematics and a Bachelor of Science in Civil Engineering degrees from the oldest private military school in the country, Norwich University in Northfield Vermont. While at Norwich, David met his future wife, Judith Bailey Allen, who survives him. They were married in White Memorial Chapel at Norwich on June 27, 1964, and enjoyed a love affair that would endure over 55 years. David was an avid ski jumper and was inducted into the Norwich Athletic Hall of Fame in 2011. After college, David rose to the rank of Captain in the United States Army and was stationed at Fort Belvoir, Virginia. During this time, Dave and Judy started a family having two children Stephen (of Needham, Massachusetts) and Heidi (of Brooksville, Florida). In 1969, David served his country and was sent to Vietnam for a one-year tour. While in the Army, David was the recipient of the Bronze Star Medal, Army Commendation Medal and National Defense Service Medal. Upon his return, David left the military and finished a Master of Civil Engineering degree from Worcester Polytechnic Institute in Worcester, Massachusetts. David joined a private engineering consultant firm, Hamilton Engineering Associates, and moved the family to Nashua, New Hampshire, in 1972. David eventually bought HEA and became president. David was active in the Nashua community during the 36 years they lived in New Hampshire. He was president of the Nashua West Rotary Club which designated him a Paul Harris Fellow of Rotary International. He was also elected to the Board of Commissioners for Nashua Public Works in 1996 serving until 2000. He was president of the American Society of Civil Engineers – New Hampshire Section from 1982-1983. David was also a lifetime member of the Masonic Grand Lodge of Vermont, Brattleboro Lodge No. 102 with over 55 years of service. Dave and Judy retired to Brooksville, Florida, full time in 2008. In their retirement, David was president of the Rotary Recreational Vehicle Fellowship club and both Dave and Judy traveled to Australia and New Zealand for the Rotary International convention in 2014. David and Judy traveled to all 50 states, most in their 30-ft RV which was the source of much enjoyment for them both over the past 20 years. David is survived by a younger brother, Daryl Farr (of Olathe, Kansas); a younger sister, Susan Timney (of Brooksville, Florida); his son, Stephen Farr and daughter-in-law Mary Kusko Farr, daughter Heidi Farr and granddaughters Amanda Farr and Julia Farr, both of Needham, Massachusetts. Memorial contributions in David Farr’s name may be made to either the Nashua Rotary West Club, c/o Steve Dohoney, P.O. Box 75, Nashua, NH 03061 or via paypal.me/NashuaWestRotary; or the Rotary Club of Spring Hill Foundation, P.O. Box 5737, Spring Hill, FL 34611.