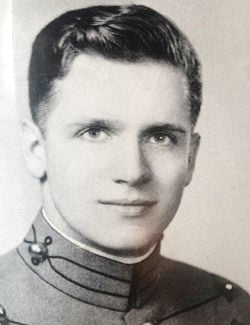 Col. Walter G. "Gordy" Allen BURLINGTON — Colonel Walter Gordon "Gordy" Allen died on Dec. 31, 2019, in Burlington. He served 30 years in the United States Army and commanded the 2nd Armored Cavalry Regiment in the period after the Soviets invaded Czechoslovakia in 1968. With this command, Allen was responsible for 300 miles of the East German border and the full Czechoslovakian border. He served first in the Allied-Occupation of Germany commanding a platoon, and in the Korean War, commanded the 16th Reconnaissance Company in the 1st Cavalry Division. In 1961-62, Allen commanded the 33rd Armored Tank Battalion, in then-Major General Creighton Abrams’ 3rd Armored Division. His service coincided with the 1961 construction of the Berlin Wall, so he took part in numerous alerts and maneuvers in areas close to the eastern borders. Colonel Allen was born on Sept. 7, 1923, in Fort Benning, Georgia. He was one of four siblings born to Frank Albert Allen Jr. and Ellen Gordon Allen. He graduated from The Hill School in Pottstown, Pennsylvania, in 1942 and The United States Military Academy at West Point in 1945. In addition to his distinguished military career, he would go on to receive three master’s degrees. Colonel Allen comes from a military family. His father was a Major General and his grandfather was Major General Walter Henry Gordon (USMA class of 1886). His brother, Frank Albert Allen III, was also a West Point graduate (USMA class of 1952) and served as a combat officer in the Korean War. In retirement, Allen worked for the accounting firm Elmer Fox in Washington, D.C., and for Northern Virginia Community College in Loudon as a professor of accounting and computer information systems. While in Sarasota, he worked for the Florida Department of Taxation and in State Arbitration. Allen lived in Montpelier from 2003 to 2006; in 2014-15 at Westview Meadows; and for the last four years at The Converse Home in Burlington. He enjoyed life in Vermont and spent his time reading, playing golf, being active with his church and visiting with family. Colonel Allen was predeceased by two sisters Laura Anne Allen and Mary Allen Poage; and his brother, Frank Albert Allen III. He is survived by his wife, Martha Ryan Allen, of Burlington; and five children Mary O’Hare (Mimi) Zebrowski of Erie, Pennsylvania, Gordon Doane Allen of New York City, James Riley Allen of Montpelier, Margaret Allen Joshua of Fairfax, Virginia, and Kathryn Gordon Allen of Alexandria, Virginia. He leaves behind a total of nine grandchildren and eight great-grandchildren; one grandchild predeceased him. A memorial Mass will take place at Fort Myer Old Post Chapel followed by interment in Arlington National Cemetery and a reception at the Fort Myer Officer’s Club. Dates and times to be announced. In lieu of flowers, remembrances may be made in his name to The Hill School, 860 Beech St., Pottstown, PA 19464, www.thehill.org. Those wishing to leave condolences online may do so at www.guareandsons.com.