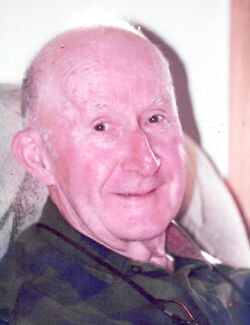 Byron H. Angell TUNBRIDGE — Byron Howe Angell, 92, of Tunbridge, died on July 25, 2021, at Mayo Health Center in Northfield, Vermont. He was born in Randolph, Vermont, on Oct. 4, 1928, the son of Dr. E. Olin Angell and Helen (Howe) Angell, and was quickly joined by a surprise twin sister. He spent his early years in Millbury, Massachusetts, graduating from Millbury High School in 1946 and Cushing Academy in 1947. He graduated from the University of Vermont in 1951 and received his master's degree from Norwich University in 1976. While at UVM, Byron participated in ROTC and was commissioned a 2nd Lieutenant in the Army upon graduation. In April of his senior year, he met the love of his life, Olive “Bunchie” Parkhurst, when he switched partners with a friend during a square-dancing class. They were married on Aug. 23, 1951, in Woodstock, Vermont. Byron served during the Korean War training troops in Japan. He was honorably discharged from the Army Reserves in 1956. Byron went on to teach math and science at Wallingford High School for two years and worked briefly for National Grange Insurance. He started teaching math and physics at VATI (now Vermont Technical College) in February of 1958. Byron taught at VTC for 34 years, retiring in 1992. Upon retirement, he was awarded the title of Professor Emeritus, which allowed him the privilege of participating in numerous graduations over the years, including those of three of his grandchildren. Byron served on the Randolph School Board and the Board of Civil Authority. He was a member and past Master of Mystic Star Phoenix Lodge #97 F&AM. Byron was a member of the University Club, the American Legion, member and past president of Montague Golf Club, a longtime member of Randolph Singers, a member of Randolph Center UCC church and Tunbridge UCC church, and a member of the Ed Larkin Contra Dancers. Byron enjoyed hunting and fishing, golfing and dancing. From his basement woodshop, he lovingly crafted future family heirlooms to mark the milestones and achievements of those closest to him: music boxes, blanket chests, beds, jewelry boxes and doll cradles. Above all else, he treasured time with his family. From seasonal adventures with Bunchie, Susan, James, Joan and Timothy, to weeklong Grandchildren’s Camps to bouncing great-grandchildren on his knees, he was always most content around the family he and Bunchie created. Whether at his chair in the living room corner, head of the dining table, rocker in the sunroom, or a perch by the bonfire, Byron watched lovingly over family gatherings, offering stories, anecdotes and jokes we all cherish and will carry with us. Byron always hugged or shook hands when it was time to say goodbye, and never missed the opportunity to throw a wink across the room to whomever happened to catch his eye. His fierce love for, and dedication to, all of us provided an example we strive for every day. Our sadness at his passing is outpaced only by the love we are privileged to hold as a family. Bryon is survived by the love of his life, his wife, Bunchie, of 70 years, the unending source of love, grace and support who sustained him though a life well-lived. The life they created is a living masterpiece and a testament to the power of their commitment to each other and adoration for their family. He is also survived by a son, James Angell, of Randolph Center; a daughter, Joan Angell, of South Portland, Maine; a son, Timothy and daughter-in-law Janet Angell, of Randolph Center; and son-in-law Jack Enos. Five grandchildren are Laurie Shannon and partner Robert Klipple, Bethany Perez and husband Alejandro, Matthew Angell and partner Beth Sturgis, Joseph Angell and wife Jacklyn, and Amanda Williams and husband Allen. Byron was the proud great-grandfather of 11, Rosie, Annabelle, Cameron, Javier, Hailey, Lucy, Agustin, Celia, Eloise, Clayton and Brynn. He is also survived by a sister-in-law, Denise, and numerous nieces, nephews and cousins. He was predeceased by his daughter, Susan Angell Enos; his parents; his twin sister, Mertie; three brothers, Frank, Philip and Wardner; and grandson-in-law Michael Simpson. Arrangements are with the Boardway and Cilley Funeral Home in Chelsea. Family burial will be in the Randolph Center Cemetery. A funeral service will be held at Tunbridge Church on Saturday, July 31, at 1 p.m., followed by a reception at the Dodge Gilman Building on the Tunbridge Fairgrounds. In lieu of flowers, donations may be made to the Susan Angell Enos scholarship at Vermont Technical College or the Tunbridge Church. A private message of sympathy for the family can be shared at www.boardwayandcilley.com.