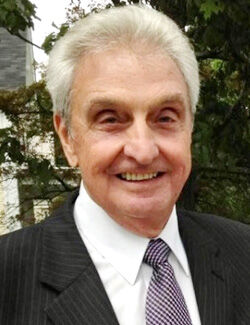 Basil M. Day BARRE TOWN — Basil Melvin Day, 86, passed away after a brief illness, on Saturday, March 27, 2021, with his family by his side. Born Nov. 22, 1934, in Worcester, he was the fifth child born to Ira Harlan and Beulah May (Moore) Day. The family moved several times before settling in North Walpole, New Hampshire, where Basil attended Bellows Falls High School in Vermont and was a proud member of the class of 1953. He was a four-sport varsity athlete, excelling in football, basketball, baseball and track, and was also a member of the Glee Club. In 1953, Basil enlisted in the U.S. Army at Fort Bragg, North Carolina. Upon his discharge, he returned to Bellows Falls to marry his high school sweetheart, Carol Ann Parker, in 1957. The couple started their married life in Greenfield, Massachusetts, where Basil began a lifelong career in the shoe business. He worked as a sales representative for Dunham’s Footwear, Ball Band and Uniroyal/Keds. In 1979, Basil and Carol opened their retail store, Day’s Shoe Tree, and it remained a fixture in downtown Barre for 20 years, closing in 1999 upon their retirement. Basil’s warm and gregarious personality made him a valued friend to all he met. He was a passionate fisherman, hunter and sportsman, and possessed an encyclopedic knowledge of his baseball hero, Ted Williams. He had a beautiful singing voice and loved country music and cowboys. He passed on to his family a deep appreciation for the outdoors and his enthusiasm for boating, snow skiing and games of any kind. He was his family’s biggest cheerleader, enthusiastically attending all of his daughters' and grandchildren’s sports and school activities. He always made sure to let them know he was there with a trademark cheer in his booming baritone voice. Survivors include the love of his life and wife of 65 years, Carol; and his two adoring daughters, Melissa Perley and her husband, Paul, of Berlin, Vermont, and Leslie Craige and her husband, Jim, of New York City; his grandchildren to whom he was a devoted and loving grandfather, Michael (Kate), Jesse (Elyse), Ethan (Emily) and Joshua Blouin, and Angus, Ellis and Parker Craige; and a proud great-grandfather to Porter, Wells, Emerson and Willow Blouin; as well as many loved cousins, nieces and nephews; and his treasured best friend, Don Rice. In addition to his parents, he was predeceased by his brothers, Ira Jr. and Charles; and his sister, Erma "Bunny" Whitaker. The service to honor and celebrate his life will be held at the convenience of his family. In lieu of flowers, memorial donations may be made to the Vermont Fish & Wildlife Department, 1 National Life Drive, Davis 2, Montpelier, VT 05620-3702: fwinformation@vermont.gov. Arrangements are by Hooker Whitcomb Funeral Home, 7 Academy St., Barre. For a memorial guestbook, please visit www.hookerwhitcomb.com.

So very sorry to hear of his passing. Was the Day's neighbor for many years. Holding the family close to my heart and in my thoughts.

I was sorry to read of your loss. Our prayers are with you in the difficult days ahead. Judy Cookson

Dear Carol and daughters, May you find comfort in each other. Our thoughts and prayers are with you. Great memories of Day’s Shoe Store, both with Basil and Carol.

My love and thoughts to Basil`s family. Perhaps one of the most kind and sincere people I have ever had the honor of knowing. I loved talking sports with him and cherish his unconditional love for his family and know how much he was adored by them. may the memories soon bring warm smiles to your faces. all my love to the family........

Carol and Melissa, I am so sorry to hear, you are all in my thoughts and prayers