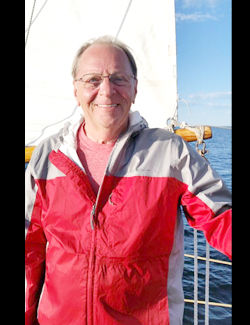 Barry W. Webster BARRE TOWN – Barry Ward Webster, 73, of Hickory Way, passed away on Wednesday, June 24, 2020, at his home with his family at his bedside. Barry was known to be a very devoted family man and highly involved in serving his country, community and church. Born Oct. 19, 1946 in Keokuk, Iowa, he was the son of Clarence Ward and Gladys Lucille (Vaughn) Webster. Barry attended local elementary schools and graduated from Keokuk High School. He joined the U.S. Navy on May 5, 1965, and served as an air traffic controller at the Naval Air Station in Key West, Florida, until he was honorably discharged at which time he joined the Navy Reserve serving until May 5, 1971. While in the Navy, he received the National Defense Service Medal. Following his naval duty, he attended the University of Minnesota and Metropolitan State University in Minneapolis-St. Paul, Minnesota, where he received a bachelor of science degree. On Dec, 16, 1988, he married Linda Jane Parker in Salt Lake City, Utah. Following their marriage, they made their home in Cottonwood Heights, Utah, until relocating to Barre Town in December 2018. Barry was employed by the U.S. Air Force as the director of Airspace Management and Government Affairs for the Utah Test and Training Range stationed at Hill Air Force Base – 388th Range Squadron. While there he received a Congressional Award for Exemplary Service to the Public and the 501st Squadron Recognition for Dedicated Service. He was a member of St. James Episcopal Church in Cottonwood Heights, Utah, where he served as senior warden, lay reader and convention delegate. Barry was a dedicated Civil War historian and avid sports fan, following the University of Utah Utes, Minnesota Vikings, Utah Jazz, and NCAA March Madness. Other interests included reading, golf, tennis, traveling, theater and concerts. Survivors include his wife, Linda Jane Webster; son, Jeffrey Ward Webster; beloved canine companion, Bailey; grandson, Alex Webster; uncle, Les Vaughn; sister-in-law, Carol Graham; niece and nephew, Jessica and Jay Baitz; grand-nephew, Cole Baitz, and grand-niece Chelsea Libby. He was predeceased by his parents, grandparents, and fur babies, Scruffy and Nicholas. A private service to honor Barry and celebrate his life will be held by his family at the Church of the Good Shepherd, Barre. Final resting place will be St. Paul’s Episcopal Church Memorial Garden in Salt Lake City. The family would like to thank staff at the CVMC Cancer Center, UVMC Department of Pulmonology, and Central Vermont Home Health and Hospice for their caring spirit and exceptional treatment in attending to Barry’s health care needs. In lieu of flowers, memorial contributions may be made to the Best Friends Animal Society, 5001 Angel Canyon Road, Kanah, UT 84741 www.bestfriends.org Arrangements are by Hooker Whitcomb Funeral Home. For a memorial guestbook, visit www.hookerwhitcomb.com