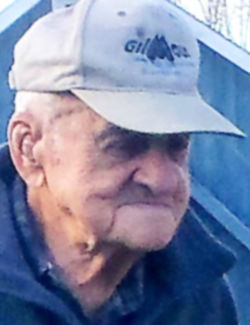 Albert H. Whitcomb MARSHFIELD — Al “Whit” Whitcomb, 93, of Holt Road, passed away on Sunday, Jan. 12, 2020, at the McClure Miller Respite House in Colchester. Born on Feb. 15, 1926, in Plainfield, he was the son of Harmon A. and Lizzie E. (Potter) Whitcomb. Raised on a hill farm, he was educated in Plainfield schools and by the Great Depression. At age 17, he left high school in his senior year, joining the U.S. Navy. Al served aboard the USS Raymon W. Herndon (APD-121) in the Pacific until the cessation of hostilities. He was awarded three Bronze Stars during his WWII service. These early life experiences shaped the man for the next 70 years. He was an extremely frugal, independent, strong, tough, hardworking, proud American who enjoyed a dance, a drink, the attention of a pretty woman and telling stories of his time in the Navy. Survivors include his daughter, Elaine (Michael) Begin; his granddaughter, Asmaa Michele Begin (Ahmed) Daoudi; his great-grandchildren Rashid, Radia and Oumniya; his aunt, Doris Marsha; his nephew, Jeffrey Johnson and family; and Jeanne’s children Donald Allain, Diane Couture and Dick Allain; as well as numerous close friends and neighbors. In addition to his parents, he was predeceased by his wives Joyce Payne, Jeanne Allain and Antoinette Abbiati; his infant daughter, Shelley; his sister, Mary Lunt; and numerous aunts and uncles. The service to honor and celebrate his life will be held in the Chapel of the Vermont Veterans Memorial Cemetery in Randolph Center followed by interment in the Spring of 2020. Per Al’s wishes, there will be no calling hours. The Hooker and Whitcomb Funeral Home, 7 Academy St., Barre, is in charge of the arrangements. For a memorial guestbook, visit www.hookerwhitcomb.com.