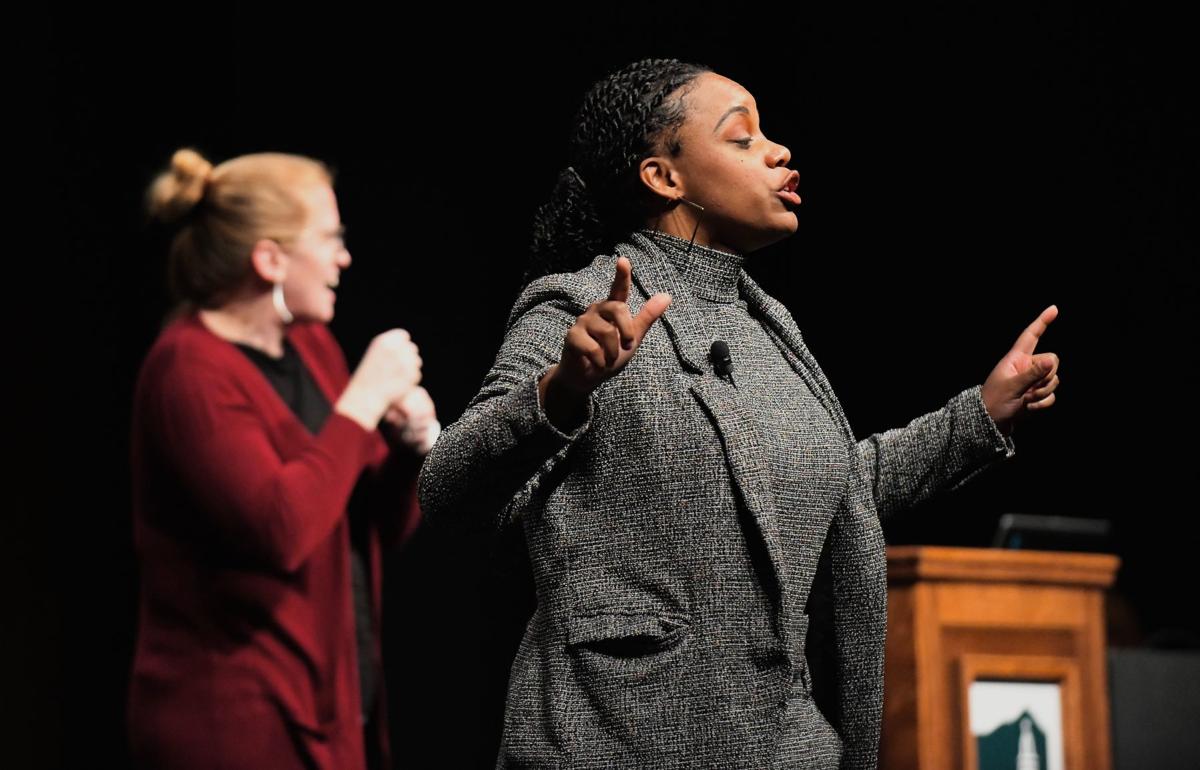 Rep. Summer Lee, of the 34th District of the Pennsylvania General Assembly, gives the keynote address during the 2020 Women’s March Vermont held at Castleton University’s Casella Theatre on Saturday. 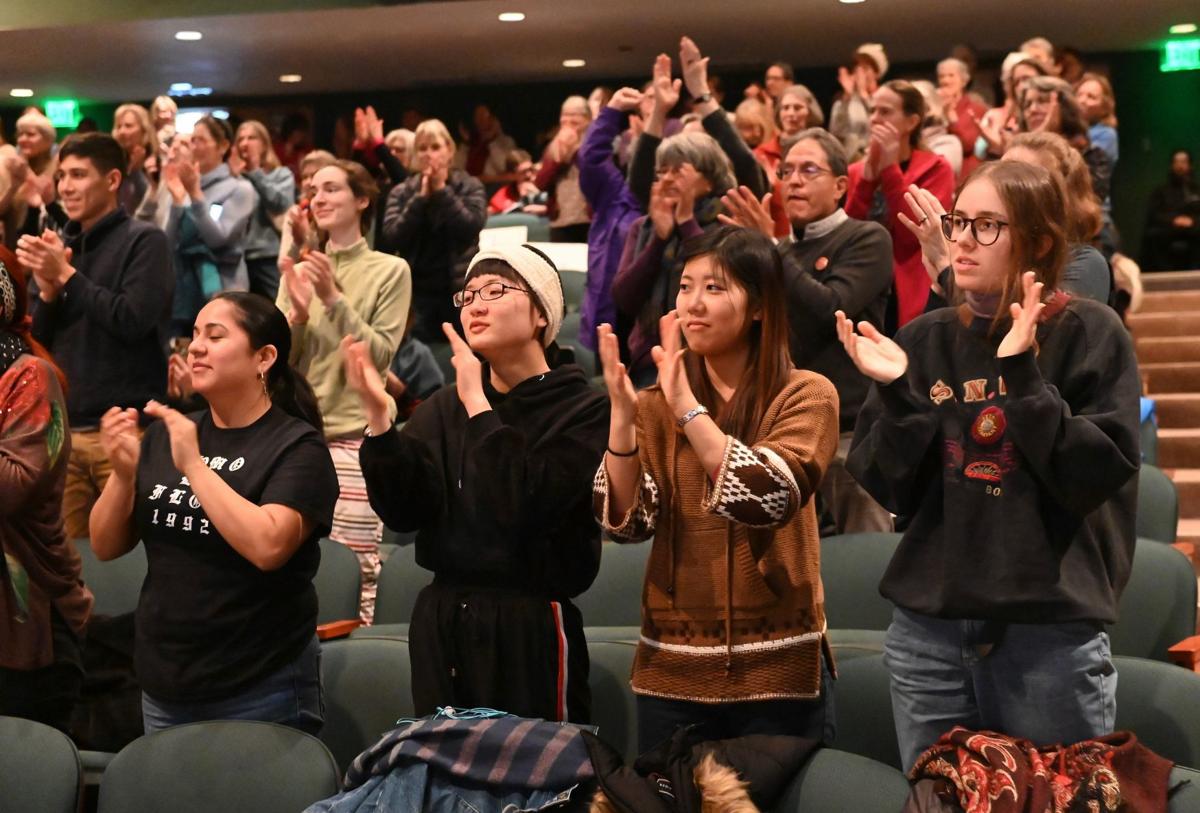 Rep. Summer Lee, of the 34th District of the Pennsylvania General Assembly, gives the keynote address during the 2020 Women’s March Vermont held at Castleton University’s Casella Theatre on Saturday.

CASTLETON — Frigid temperatures and the threat of snowy weather seemed to cause a low turnout for the fourth annual Women’s March Vermont on Saturday afternoon.

But what the crowd lacked in size it made up for in enthusiasm.

At various points, speakers led the crowd in various chants, like “stand up, fight back” and “the people united will never be defeated.”

Around 200 people filled Castleton University’s Casella Theater to hear from a slate of speakers on a variety of timely topics, including gender and racial equity, worker’s rights, LQBTQ+ rights and more.

The event was one of dozens of similar women’s marches held across the country on Saturday.

Mia Schultz, one of the day’s hosts as well as a speaker, welcomed the crowd, saying “I urge you to take action even if it does not affect you.”

Throughout the afternoon there were many such opportunities for direct action. Attendees were called on to register to vote, write letters to legislators and show solidarity for causes via social media posts.

The first speaker, Julia MacDonald, a Vermont Law School student and University of Vermont Schweitzer scholarship fellow, spoke in support of Proposition 5, which would amend the Vermont constitution to recognize reproductive rights as a human right. She encouraged attendees to visit a link where they could share their own stories of reproductive freedom.

Williams then introduced a video produced by Migrant Justice about the organization’s Milk with Dignity campaign, which advocates for minimum wage, benefits and protections for migrant dairy farm workers.

Pennsylvania State Rep. Summer Lee delivered the keynote speech. In a passionate 30-plus minute address, the 32-year-old Democrat and first black woman from western Pennsylvania to be elected in the Pennsylvania General Assembly, offered a message of unity and intersectionality. She challenged the mostly white and female crowd to broaden its definition of women’s issues.

“If all you’re trying to do is fight the patriarchy, but you’re not worried about that white supremacy, then the movement is not big enough,” Lee said, noting the drop in attendance by people of color at women’s marches since the movement began in 2017.

At one point, she suggested that the entire movement should be dismantled and rebuilt in a way that centers on women of color in addition to white women.

Beyond racism, Lee cited criminal justice reform, income inequality and LGBTQ+ rights among the many issues that impact women as much as reproductive issues.

She acknowledged that for many women, feminism has become their identity. “To say that you have to investigate that and you have to interrogate that, I know that makes you uncomfortable.”

She remarked that, as an African-American woman, she is always uncomfortable, and invited them to join her in that uncomfortable space.

“We need white women to recognize that if it impacts one of us it impacts all of us,” Lee said. “Until you see yourself as one of all of us we’re not gonna get to that society that we need to get to.”

To that end, she offered a challenge: “I hope that you will get up, that you will take your pink pussy hat off ... and go up to your sister of color and tell her that, ‘I am here. What do you need?’”

Lee said that lasting social change will only come from tangible action, not just posting things to social media while remaining complacent within the current status quo.

“It is time that we reconcile that our system is beyond repair,” she said. “Any system that is built on the oppression of our sibling is beyond repair. We have to use everything that we have to get into that system to break it down.”

Here she offered another challenge: Get involved.

Lee’s message, while pointed and heavily critical at times, was met with numerous applause breaks and standing ovations.

In the theater lobby, attendees were able to get information from local and national nonprofit organizations, including Rutland County NAACP, 350 Rutland County, Rights and Democracy and Castleton Indivisible, ACLU and Planned Parenthood.

Sara Stowell, of Proctorsville, said she took Lee’s message to heart, admitting she has been trying to overcome her complacency lately.

“I’ve been going to a number of talks and things like that in which people keep reminding me that sitting at home and Facebooking is not enough,” she said.

Stowell said she plans on taking more direct action to challenge the structures of power that keep some people on the outside while keeping others within them.

Lakeisha Lamb, vice president of the Rutland County NAACP, attended with her daughter. She said she enjoyed the afternoon despite the small turnout.

“Summer was amazing — very moving,” she said during the event. “Everybody I’ve heard speak today so far has been great.”