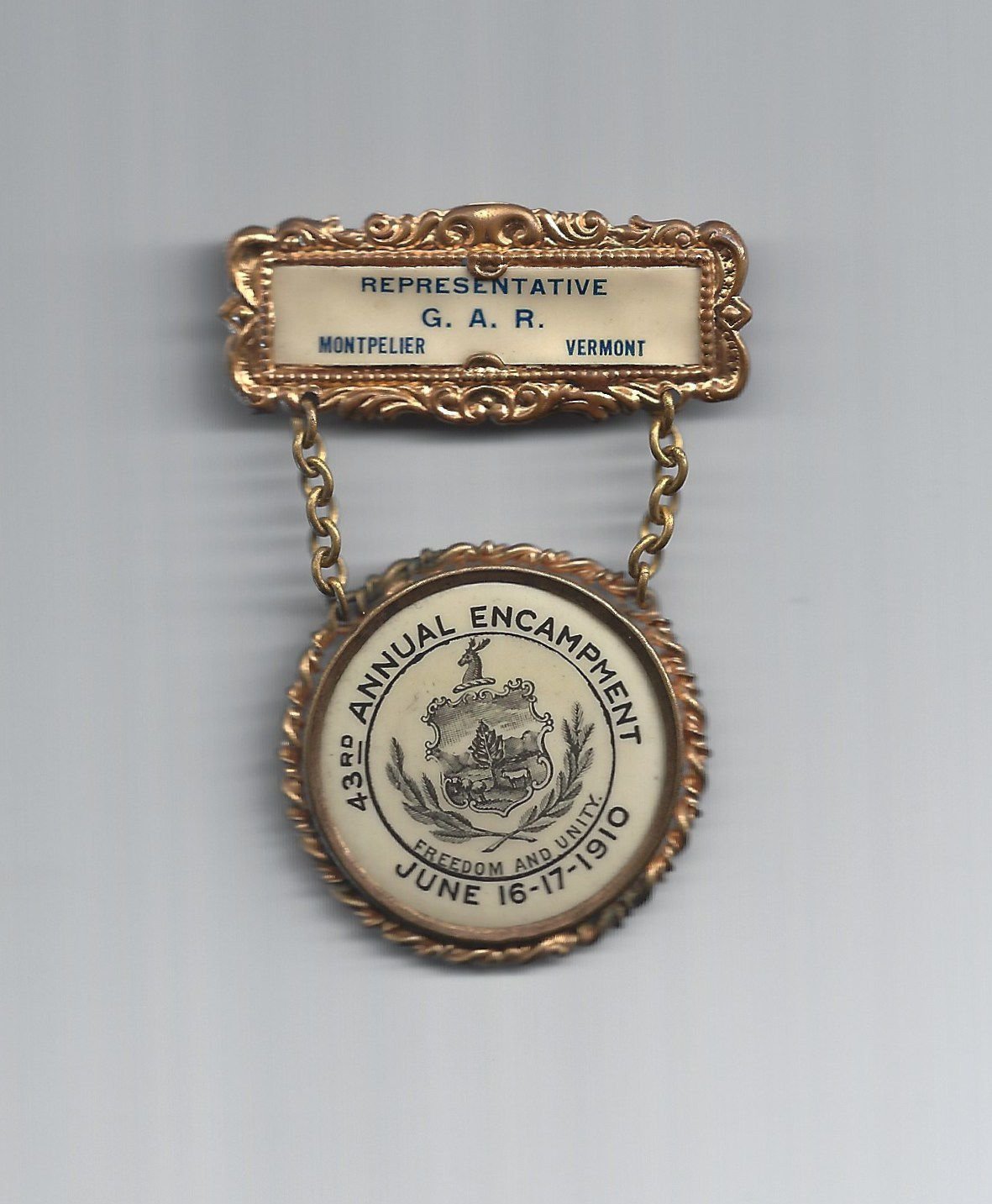 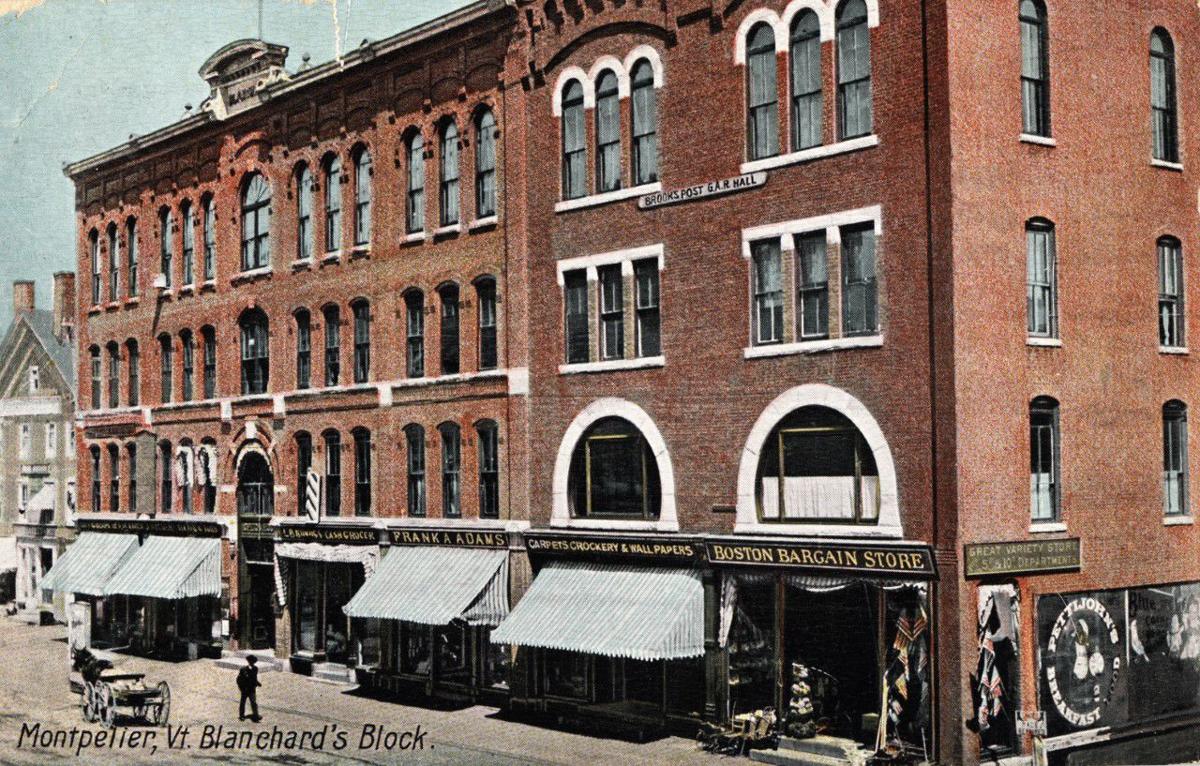 “All Against Lee” read the headline in the newspaper. It seemed that the Grand Army of the Republic, the veterans group for Union soldiers in the Civil War, had declared its opposition to a statue of Robert E. Lee in the nation’s capital.

On June 16, 1910, Vermont’s Civil War veterans gathered in Montpelier for their annual reunion or, as the G.A.R. called it, “encampment.” The headlines in Vermont newspapers declared the veterans’ strident opposition to the bronze figure of Robert E. Lee being installed in Statuary Hall at the Capitol building in Washington, D.C. Eli N. Peck, senior vice commander of the Vermont veterans group, reported that “the placing in the U.S. Capitol of statues of men who did all in their power to destroy the nation is an insult to memory of those who died in defense of the nation.” Furthermore, Peck urged, “that the law be amended so that no person who has ever born arms against the United States can ever remain or be placed in the National Hall of Statuary.” Peck’s complaint was echoed nationally by other G.A.R. spokesmen who decried what they termed Lee’s “treasonous” behavior during the war.

Robert E. Lee, educated, fed and clothed by the government for the express purpose of defending her against all enemies was first a deserter and then a traitor. He said all the property and other interests of his wife and children were in Virginia, and he must protect these.

Again, I say disloyal, because after the bloody war precipitated by Lee and his friends was over, he lived a traitor to the end, and died as he had lived, “in rebellion to recognized authority,” for he never took the oath of amnesty.

The nationally published grievance is from an op-ed page printed in the Washington, D.C., National Tribune three month later. The lengthy jeremiad was a composite of protests from G.A.R. posts throughout America, all condemning the honoring of the Confederate general in the nation’s capital. The complaint specifically alleged that Lee never signed the “Amnesty Oath” which constituted a pardon and was offered to Confederate soldiers to restore their full citizenship in the United States.

This public grievance was organized at the height of G.A.R influence in America. The Grand Army of the Republic, a national organization, was founded in 1866, the year after the Civil War ended, and the first Vermont chapter was organized at St. Johnsbury in 1868. The Montpelier post was initially convened in 1873 and named for Gen. William T.H. Brooks, the first commander of the Vermont Brigade. The Brooks Post moved into a new G.A.R. Hall on lower Main Street after the great Montpelier fire of 1875. Eventually, the G.A.R. Hall relocated to the upper floors of the addition to the Blanchard Block completed in 1890. In 1992, University of Vermont Prof. T.D.S. Bassett noted that, in Vermont, “by 1880, veterans began to win political offices, thanks to Redfield Proctor and Wheelock G. Veazey’s ‘Reunion of Vermont Officers,’ and the annual encampments attracted large numbers.” Another sign of the influence of the G.A.R. was the founding of the Women’s Relief Corps, a ladies auxiliary consisting of wives of the veterans.

When one considers the vast number of Americans who served in the Union Army, one can imagine the substantial power of this veterans’ organization — perhaps greater than the influence of today’s American Legion and Veterans of Foreign Wars combined. Each state had a G.A.R. Department which had oversight for individual posts, usually one to a town, and the posts typically were lodged in a hall, much like today’s Legion or VFW Halls. At its height, the G.A.R. counted almost 500,000 members, a far greater percentage of the total U.S. population of 38,000,000 than the membership of today’s VFW and American Legion.

The G.A.R. was, for a time, very influential in American politics. As might be expected, they were powerful and effective advocates for veterans’ rights and benefits, but they also advocated for recognition of black veterans. They were instrumental in the transformation of Decoration Day into Memorial Day, and their common bond unified the former soldiers into a formidable voting bloc. Historians credit the membership with helping to elect Republican U.S. presidents from Ulysses S. Grant to William McKinley. It was said that a Republican could not secure the nomination for president without the endorsement of the G.A.R.

When the Montpelier group was mustered into existence in May 1873, the officers of Post 13 read like a Who’s Who of Montpelier Civil War veterans. The commander, Fred Elijah Smith, had been a quartermaster with the 8th Vermont and had assumed an impressive post-war career that enabled him to lend support to the nascent organization. Francis Voltaire Randall was senior vice commander and captain of the Capital Guards. Leading a company of Montpelier men through the hard days of battle, he was a well-liked and respected battlefield commander. Another senior vice commander was James S. Peck who was commissioned as a lieutenant and mustered out as a major. The post’s quartermaster was John Wesley Clark who was awarded the medal of honor for his acts of valor.

The immediate consequence of the Civil War veterans’ movement was Memorial Day — the holiday to honor or all war dead. National G.A.R. commander, Maj. Gen. John A. Logan declared, “The 30th Day of May, 1868, is designated for the purpose of strewing with flowers or otherwise decorating the graves of comrades who died in the defense of their country during the late rebellion, and whose bodies now lie in almost every city, village and hamlet churchyard in the land.”

Over the years, Decoration Day evolved into Memorial Day, the solemn occasion when all war dead are reverently honored for their sacrifice.

But the objection to memorializing Robert E. Lee in the nation’s capital was another matter entirely. Its origin was decades old. Gillian Brockell described the circumstances in an August 17, 2017, opinion piece for the Washington Post:

“A law passed in 1864 invited each state to send two statues of notable citizens to occupy the old House chamber in a “national Valhalla.” Virginia was understandably occupied with other matters at the time, and so, like many states, didn’t get around to sending the statues until decades after the invitation was sent.”

George Washington snagged the first spot. But the General Assembly voted down other favorite sons — Thomas Jefferson, James Madison, James Monroe — in favor of Lee. The Washington Post reported that there was “some thought that perhaps the time was inopportune, and that the matter would be better deferred.”

The original 1864 legislation, by the way, was drafted by Justin Smith Morrill, a Vermont congressman (and later senator) who proposed the initiative to make use of the old House Chamber which had been replaced with a larger facility.

To what end, asked Morrill, more useful or grand, and at the same time simple or inexpensive, can we devote it (the chamber) than to ordain that it shall be set apart for the reception of such statuary as each state shall elect to be deserving of in this lasting commemoration.

Vermont’s two deserving personages were Ethan Allen and a lesser known grandee, Jacob Collamer. Collamer, a congressman and senator, had a legacy as an anti-slavery activist. He was nominated for Statuary Hall by his Senate colleague Morrill. Virginia’s choice to honor Lee in Statuary Hall was, most likely, encouraged by the “Lost Cause of the Confederacy Movement,” which Brockell describes as A revisionist-history narrative that depicts the South’s secession and defeat as heroic and even patriotic. As the Southern Poverty Law Center has catalogued from 1900 and into the 1930s, Confederate monuments sprang up in the South at a record pace. Statues of Lee — the Confederate commander and a cruel slave owner who had been recast as a gentle, reluctant warrior — were particularly popular.

Virginia’s 1909 choice to memorialize Lee was met with outrage. Congressman Curtis of Kansas declared, “I think it is a disgrace. He was a traitor to his country, and I will not sanction an official honor for a traitor.” Brockell noted,

Other Kansas politicians threatened to send a statue of John Brown, the Kansas abolitionist who led an armed insurrection at Harpers Ferry, Va., to the Capitol.

At the time of the insurrection, Harpers Ferry was part of Virginia. It is now in West Virginia. A Michigan congressman submitted a sarcastic bill to build a Brown statue in Richmond.

Clearly, the decision to install Lee in Statuary Hall was seen as a provocation and met with resistance by northern politicians and the G.A.R. In Montpelier, on the morning of June 16, 1910, the Vermont Division of the Grand Army of the Republic went on record, as reported by the Montpelier Morning Journal, “At the morning session of the Grand Army encampment, a resolution offered by Col. Z.M. Mansur of Island Pond, was adopted by a unanimous rising vote protesting against Congress accepting or allowing to remain in Statuary Hall, the statue of Gen. Robert E. Lee in Confederate uniform placed there by the state of Virginia.”

Despite the protests of the influential veterans organization, the law introduced by Justin Morrill almost 50 years earlier, clearly allowed for the Lee statue to be installed. Over the next several years, five more Confederate statues from other states were added to Statuary Hall and, in 1931, Mississippi dedicated a statue to Jefferson Davis in an elaborate ceremony. While southern states presented a few more Confederate monuments to Statuary Hall, others, including Virginia’s Lee statue, were eventually moved elsewhere in the Capital.

In the more than 100 years since the controversy first surfaced, scholars have reassessed the causes and consequences of the Civil War. Historians have recast the importance of slavery in secession and the inhumanity of chattel slavery. To many, the objections of those who fought for the abolition of slavery have come to be viewed with favor.

Paul Heller is a writer and historian who lives in Barre.

The reunion organization was called the Reunion SOCIETY of Vermont officers.

After the war, James S. Peck went on to serve as adjutant general of the Vermont National Guard