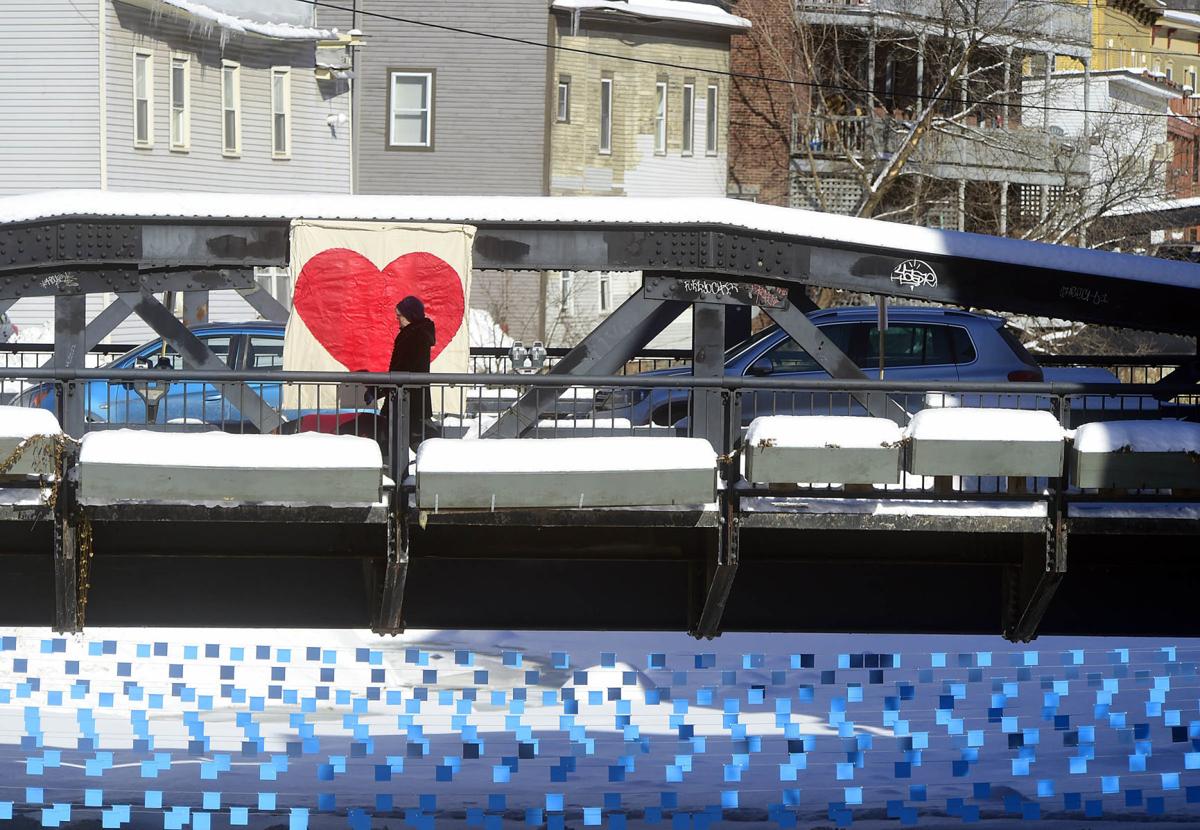 A huge heart hangs on the Langdon Street bridge Thursday as the Valentine Phantom once again covered downtown Montpelier in hearts for the annual celebration of Valentine’s Day. 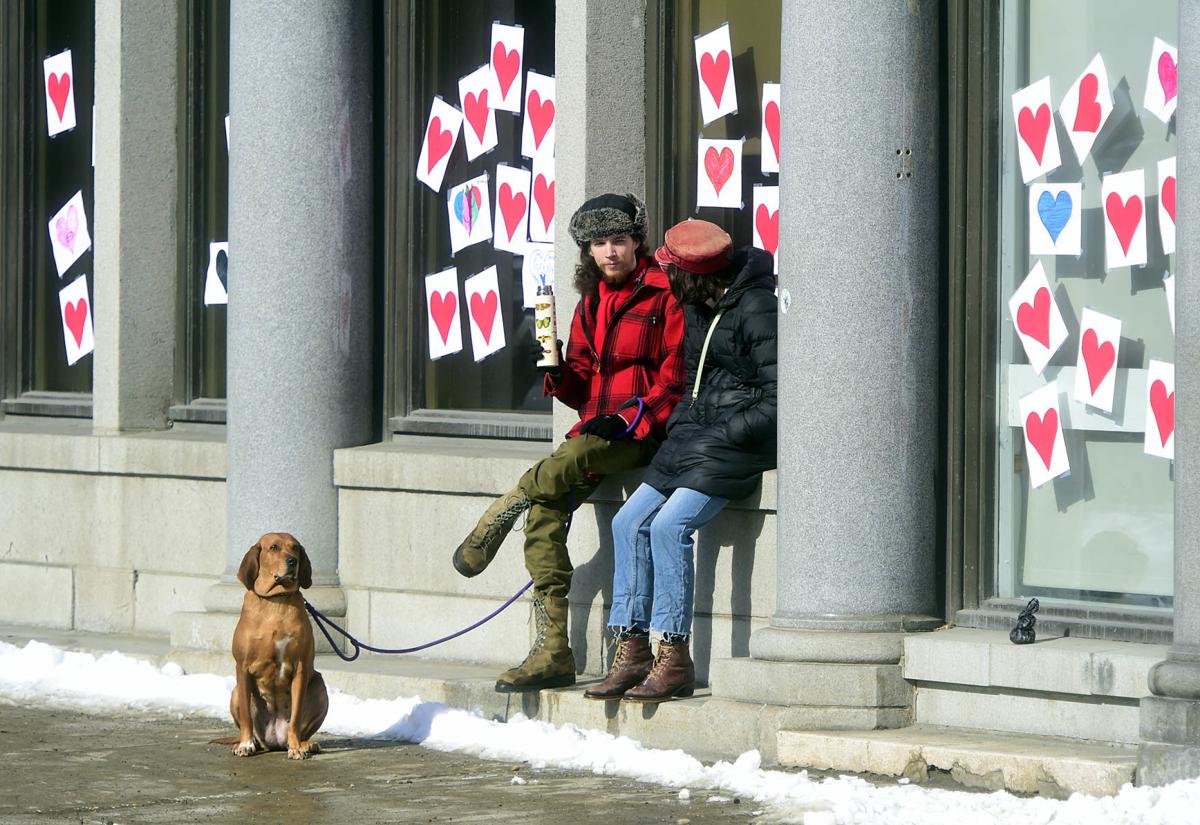 Ivan Shadis, Lily Smith, and Reba, enjoy the sunshine Thursday surrounded by hearts as the Valentine Phantom once again covered downtown Montpelier in hearts for the annual celebration of Valentine’s Day.

A huge heart hangs on the Langdon Street bridge Thursday as the Valentine Phantom once again covered downtown Montpelier in hearts for the annual celebration of Valentine’s Day.

Ivan Shadis, Lily Smith, and Reba, enjoy the sunshine Thursday surrounded by hearts as the Valentine Phantom once again covered downtown Montpelier in hearts for the annual celebration of Valentine’s Day.

MONTPELIER — The Valentine Phantom stuck again in the Capital City Thursday, plastering storefront windows with red paper hearts that continue to celebrate the reverie of the romantic celebration.

The decades-old tradition remains intact, apart from a one-year break when the original phantom — identity still a closely-guarded secret — moved away a few years ago and an equally secret band of volunteers stepped in to take the phantom’s place. The paper hearts appear overnight, and again this year, included additional hearts that had been colored by elementary school children in the city. Businesses were expecting a good day, despite a slow start, as the sun shone and temperatures soared, a welcome break after recent storms and freezes. Chocolates, flowers, cards and dinner reservations were the order of the day at many businesses.

Botanica Florals co-owner Sarah McAllister was working at a feverish pace to fill a rush of flower orders but still enjoyed the festive day.

“It looked just beautiful this morning, driving down State Street, to see all the hearts; I found that so perfect today,” McAllister said. “A lot of people just want spring flowers; we’ve had a lot of gray days out there, so people want color.”

At Bear Pond Books, co-owner Claire Benedict was working on a display of novels “for, about and by women,” according to a display sign, and the store was also offering a 20 percent discount on purchases.

“People are also coming in and buying cards and chocolates; we always sell a lot of chocolates,” Benedict said.

Chocolate sales were also the prime product for customers at Cocoa Bean of Vermont, where co-owner Wally Delia was busy filling orders.

At La Brioche café and bakery, customers were offered a range of pastries, cookies and cupcakes with red and pink icing, and chocolate, raspberry, amaretti and even jalapeno accents, and the café was festively decorated in Valentine’s Day themes.

Logan Birdsall, front-of-house manager, said the Valentine Phantom was a surprise to her after moving to Montpelier recently.

“I only moved here in September and saw a couple of (old) hearts on a couple of business and wondered what it was all about and now it’s fun to have it all come together months later, to know what it’s all about,” Birdsall said.

Eric Bigglestone, co-owner of Capitol Stationers, said business had been slow in the morning and said he thought a lot of people were shopping less as a result of the recent poor weather.

“I will say, concerning the January and February weather, this is a pedestrian town, so it’s been killer, and business has been way off,” Bigglestone said. “With all this snow, and if it’s cold and windy, you don’t get people.”

Bigglestone said he was nonetheless elated to drive into town and see the festive display of hearts on storefronts.

“Montpelier is always special because of the phantom,” Bigglestone said, adding that staple Valentine gifts in his store included a selection of Vermont-made chocolates and maple products, and Valentine cards.

Asked if he knew who the phantom was, Bigglestone said ‘no,’ hesitantly, adding, “I kinda know but I don’t know, maybe it’s the Easter bunny.”

At the Elm Street Chop Shop men’s barbershop, owner Andrea Jackson said she was feeling good about the celebration in the city.

“I love that the phantom comes every year and makes us feel like we’re loved,” Jackson said, as she cut a customer’s hair. “And if I don’t get a Valentine from anybody else, I know I got one from the Valentine Phantom.”

Restaurants were also gearing up for a busy sell-out night of romantic revelers.

Positive Pie pulled out all the stops with an exotic menu. To start, a Farmers Board starter plate and other offerings included an oyster special, salmon cakes, surf and turf, and delicious desserts.

“It’s a top-shelf margarita for $6.95, a splash of cranberry to cranberry to make it pink,” said Amanda Hebert, general manager.

On her way to Julio’s, bartender Kaylee Weston, was dressed the part for Valentine’s Day with a rosette headband, red lace dress and shiny jewelry.

“I hope to see a lot of couples and people enjoying the holiday; I don’t like seeing anyone upset today, and then enjoy a bottle of wine at the end of the day,” Weston said.

At Kismet, next door, the fine-dining restaurant wasn’t planning a special menu either, but staff said they planned to “change it up a little,” by varying the use of specialty sauces developed over the past decade.

“We adjust a lot our dishes, we’ll move sauces around; we’ve been open for 10 years and we’ll try and brighten it up a little,” said cook Dusty Berard. “We’ve been fully booked for a while, with a long wait list.”

For those planning to have a romantic dinner at home, Uncommon Market was having a run on its prime fresh fish offerings.

“I love it, it’s like my favorite day in Montpelier,” said co-owner Sharron Allen. “Everyone’s so happy, people in love.”