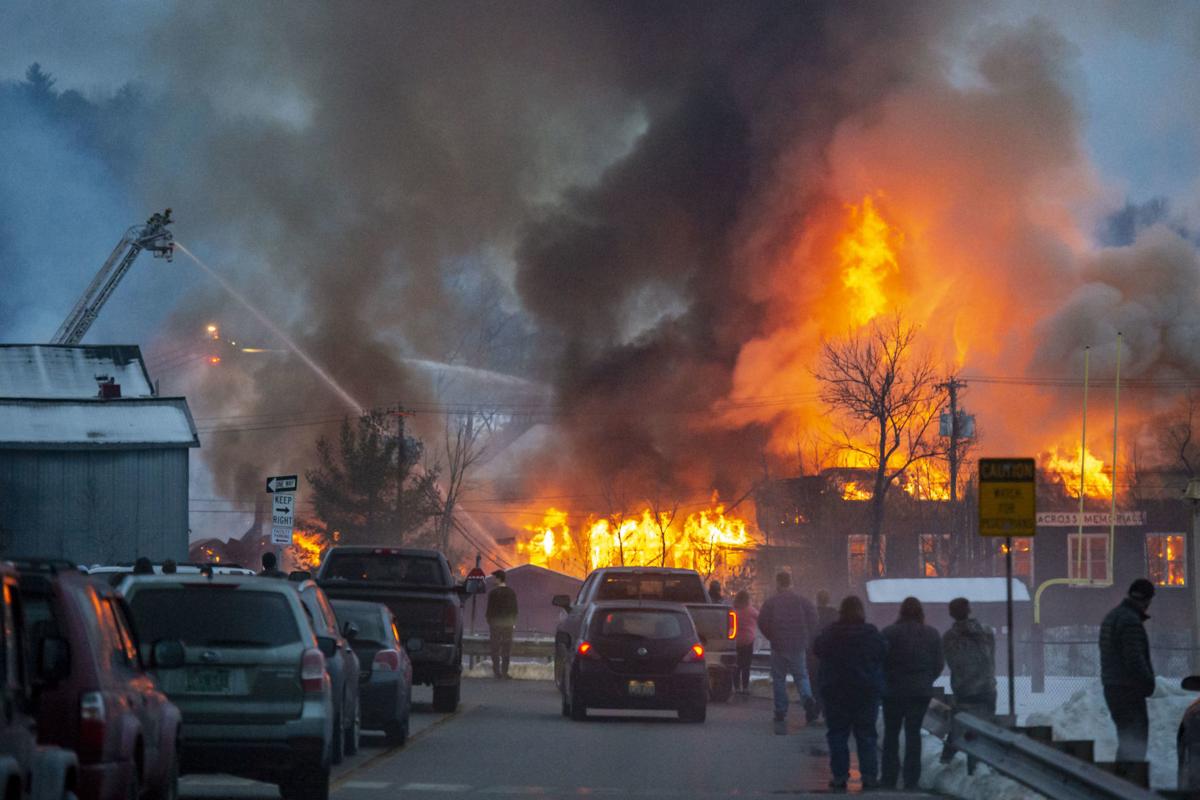 Crowds gather on the Spaulding High School athletic fields on Saturday to watch as area departments assist Barre Fire Department in responding to the fire on Boynton Street. 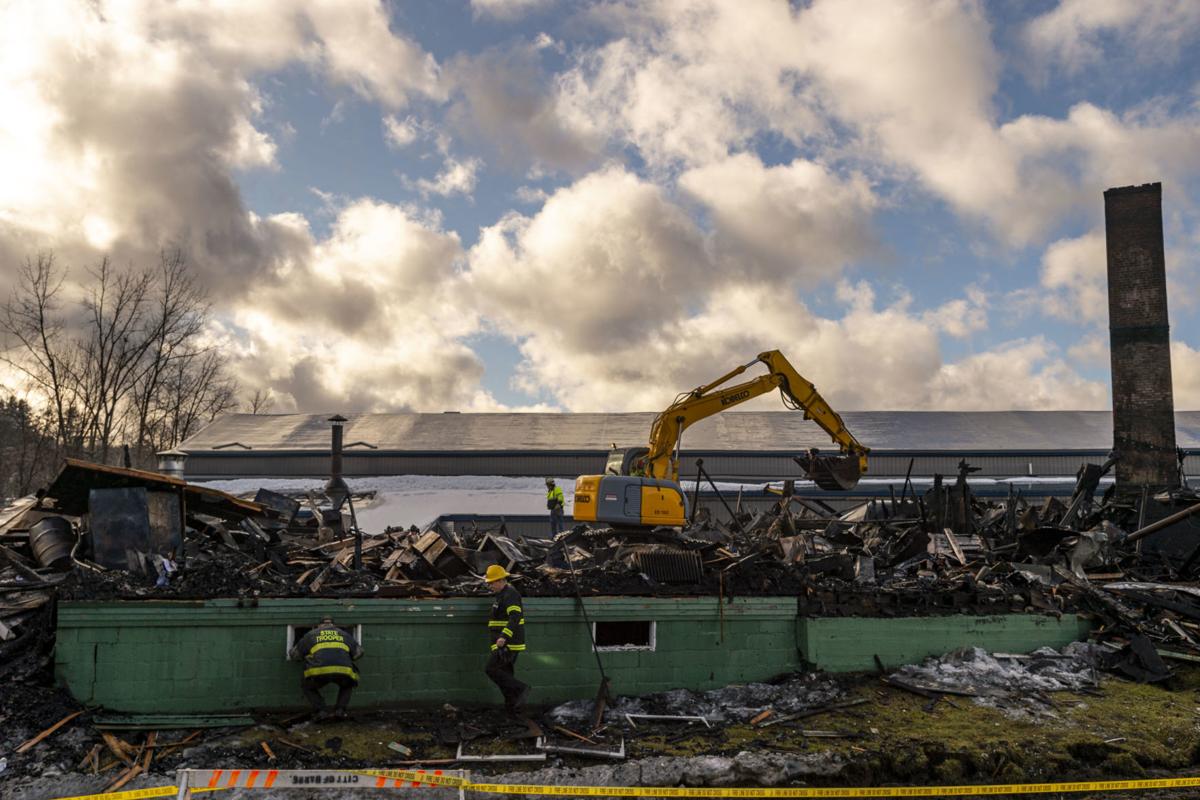 Investigation and cleanup begins on Sunday at the scene of Saturday’s Boynton Street fire in Barre. Additional photos from Saturday’s blaze appear today on A2.

Crowds gather on the Spaulding High School athletic fields on Saturday to watch as area departments assist Barre Fire Department in responding to the fire on Boynton Street.

Investigation and cleanup begins on Sunday at the scene of Saturday’s Boynton Street fire in Barre. Additional photos from Saturday’s blaze appear today on A2.

BARRE — The cause of a Saturday afternoon fire that leveled one of Barre’s century-old granite sheds remains under investigation, though Fire Chief Doug Brent said it has been slow going so far.

“We’re trying to figure out where and why it started,” Brent said of a fire that ripped through the Boynton Street shed that was home to LaCross Memorials for more than 55 years before being sold to Hardrock Granite Co. in 2016.

It isn’t home to anything any more. Unless you count the brick chimney that towers out of a massive pile of twisted metal, soot-covered stone, and building debris, it’s gone.

“We’ve literally been digging and we’ll continue to follow up on a bunch of leads,” Brent said, noting an excavator used to move the rubble remains on scene.

The fire was comparatively quick, though it took more than nine hours for firefighters to declare it “under control” — a call that came very early Sunday morning.

By then there wasn’t much left.

Brent, who recalled local firefighters saving the former Beck & Beck granite plant during his first tour as Barre’s fire chief, said that was never a realistic option on Saturday.

“Fire cooked through that building like Grant through Richmond,” he said, explaining the strategy of confining the fire to the area of origin, was quickly abandoned in favor of confining it to the building of origin.

“It was basically put the hose between what’s on fire and what’s not on fire,” he said, noting a much larger building located perhaps 15 feet from the one that burned to the ground was unscathed as a result.

Though Brent lamented the loss of an historic shed with huge timbers and a long history in Barre, he said firefighters never had a realistic chance of saving it.

Barre firefighters were summoned to the scene at 3:30 p.m. and, given the advanced nature of the blaze, the size of the building and its close proximity to even larger structures, firefighters from Montpelier, Barre Town, Williamstown and East Montpelier were called to assist. East Montpelier firefighters were initially tasked with covering the station in Barre, but later called upon to pump water from the nearby Jail Branch of the Winooski River, which flows between Boynton Street and the nearby Spaulding High School campus.

Water drawn from two locations along the river was used along with 496,000 gallons of water from nearby hydrants to fight the fire for more than nine hours.

When East Montpelier firefighters headed to the scene volunteers from Northfield replaced them at the station, while Williamstown ambulance provided backup coverage and Barre Town Emergency Medical Services staged an ambulance at the scene.

Deputy Fire Chief Joseph Aldsworth said roughly 70 firefighters were on scene at the height of the fire and dozens stayed until early Sunday morning. An assortment of firefighting apparatus, including three tower trucks and one ladder truck were also deployed, with two of them – Barre’s tower truck and the ladder truck from Williamstown used to create a “water curtain” to protect its nearest neighbor DMS Machining & Fabrication.

Diane Atwood, whose family owns DMS, wasn’t the first to call 9-11 on Saturday afternoon, but she said she was likely the second.

“I was coming down to feed my son’s cats and I saw smoke,” Atwood said Monday, noting the cats were in the house next door to her Boynton Street business.

It wasn’t until she arrived at 3:31 p.m. Saturday that she realized which building was actually on fire. It wasn’t the small house, or the massive manufacturing plant that houses DMS. It was the granite shed located barely 15 feet away from the latter building — one, she said, mercifully didn’t burn.

Atwood credits firefighters for preventing the fire from spreading and said they told her that task would have been much harder if DMS hadn’t installed metal siding on its wooden exterior last year. In retrospect it was a fortuitous upgrade said Atwood, who felt for her business’ nearest neighbors.

“Our hearts go out to those companies but right now the real story is the firefighters and the job they did,” she said.

Atwood, who watched “thick heavy smoke” turn into “a big ball of fire” said her husband, Byron, was on the way to a Spaulding girls hockey game at the BOR ice arena when he saw smoke rising on the south end of the city and skipped the game. Atwood said her husband drove to DMS too as did some employees who mistakenly heard that building — not the one owned by Hardrock Granite — was on fire.

The huge fire drew a crowd of people who learned about the blaze in different ways and sought to get as close as they could on Saturday.

Cecchinelli got a heads up from his sister Jennifer Crowell, whose husband, Andy, is a volunteer firefighter in Middlesex. Crowell heard there was a structure fire on Boynton Street and relayed that message to Cecchinelli, a local sculptor who works out Buttura & Gherardi Granite Artisans.

Unclear which building might actually be on fire, Cecchinelli shot over to Spaulding High School where he snapped and shared an early photo of bright orange flames bursting out the window above a sign that still said LaCross Memorials.

“I was on the bleachers at Spaulding,” Cecchinelli said of the photograph he snapped across the Jail Branch.

City Manager Steve Mackenzie said he was working in his City Hall office when he heard the first fire truck drive by Saturday afternoon. “I didn’t think much of it,” he said. “But when I heard six more fly by I figured something was up.”

Curious, Mackenzie went to check it out and saw all he needed to know from the steps of City Hall.

“You could see the black plume of smoke rising above the landscape of the buildings,” he said.

Mackenzie, who responded to the scene, said Atwood was right to feel fortunate.

“The way that blaze was roaring it sure could have jumped from one building to the next,” he said, noting firefighters protecting the DMS building a top priority after quickly concluding there was no way to save the one that was already on fire.

“It’s like any old granite shed,” he said. “The timbers have been there for 80 or 100 years, are dry as a bone and there are plenty of fuel sources throughout the building.”

Mackenzie said the result was predictable and witnessed by hundreds of people from various vantage points in the vicinity of Spaulding High School.

“It pretty much leveled itself,” he said.

According to city records, LaCross sold the manufacturing plant to Hardrock Granite for $310,000 in 2016. That sale facilitated Hardrock’s move from Burnham Street where it sold its former location to Capital Candy Co. for $85,000 on Jan. 6, 2016.

Hardrock owner Scott MacAskill watched his business burn for several hours after being summoned to the scene by a firefighter friend shortly before 4 p.m.

The business, MacAskill said, had been closed for the annual winter shutdown though some of his eight employees were scheduled to return to work on Monday.

“That didn’t happen,” he said, explaining it quickly became clear the building — and the expensive equipment it contained — would be lost.

MacAskill said he has insurance, but doubts it will cover the cost of putting him back in business.

MacAskill said nobody had been in the building for several weeks and sought to clear up confusion over what businesses were based there. MacAskill said the building was home to Hardrock Granite and it leased space to P&E Drafting – a one-woman operation. He allowed another company – P&G Sandblast to store some stone in the building and Todd Anderson of Anderson Co. had worked there “periodically.”

Meanwhile, Brent said local authorities were receiving assistance in their investigation from the state Department of Public Safety and the state police.

Investigators spent several hours at the scene on Sunday and huddled Monday to compare notes without reaching any conclusions.

Brent expects that will change.

“I imagine within the next 48 hours we’ll know something,” he said.

Berlin Fire was there as well, with a ladder truck, rescue truck and many firefighters. Moretown covered Berlin's station.