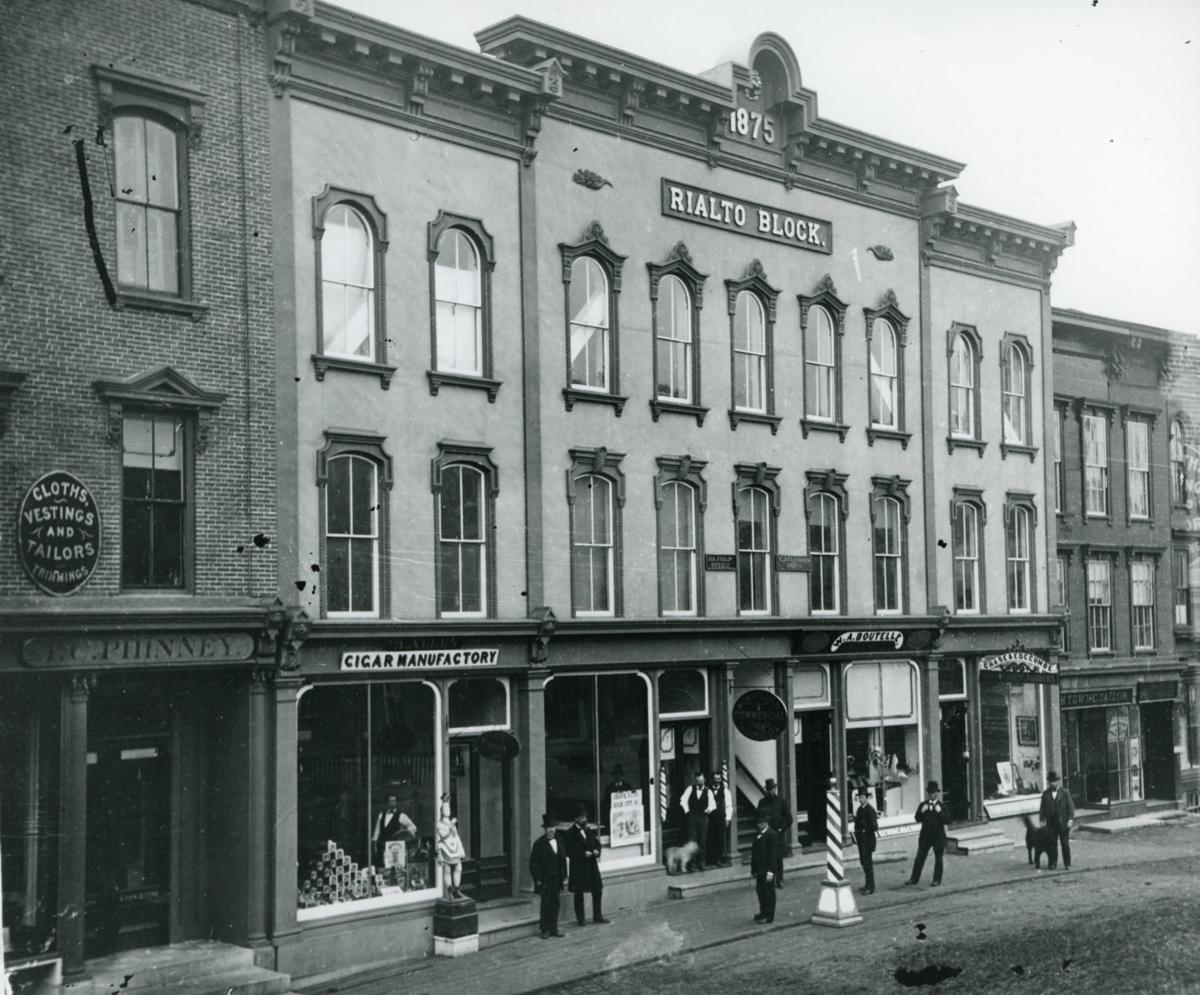 Arthur Allen’s cigar manufactory was in the Rialto Block on State Street in Montpelier. 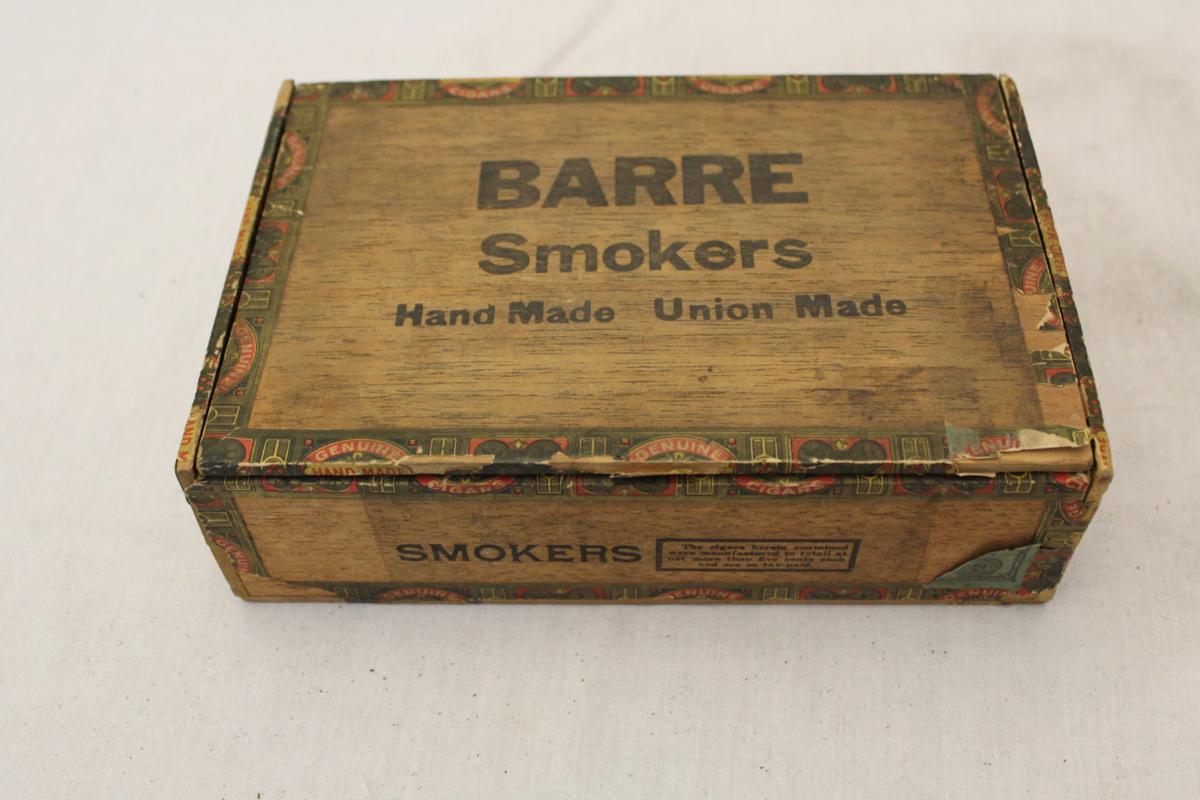 A Box of “Barre Smokers”. 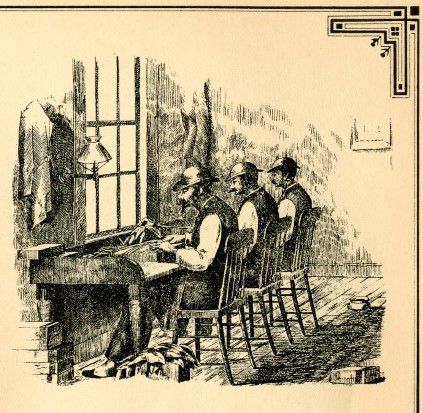 Arthur Allen’s cigar manufactory was in the Rialto Block on State Street in Montpelier.

A Box of “Barre Smokers”.

Albert “Crazy” Chase, the legendary, cigar-chomping, cross-dressing fiddler from Moretown, was in George Marrion’s Barre tobacco shop in 1917 to give an exhibition of trick smoking. He accepted a challenge to smoke “an ordinary cigar in three minutes,” while legions of ne’er-do-wells, idlers and curiosity seekers looked on, the Barre Daily Times reported:

Mr. Chase ordered a weed of strong texture, and at the starting of a minute hand, Chase had, lit up and converted himself immediately into a human smoke stack with a volume of blue smoke pouring incessantly from his mouth. With rapid and violent puffs, Chase successfully carried out his boast, smoking the cigar in two minutes – one minute under the time limit. It was learned that this human smoke stack filled the store to such an extent one evening last winter by smoking three cigars consecutively that all doors and windows had to be opened, and Mr. Emslie declared the doors were reached only by the sense of touch and not by sight.

Cigar making was still a localized endeavor in the 19th and early 20th century. Although a variety of tobaccos and various brands of cigars were available at Marrion’s tobacco shop on Depot Square, many of the cigars were manufactured on the premises. Additionally, there was “The King of Vermont,” a very popular variety that sold for five cents. In Burlington, “The Queen City Defender,” held sway, and in the Granite City, the “Barre Smokers” proudly declared that they were Union Made.

It makes perfect sense that New England tobacconists produced their own cigars, for the finest tobacco leaf used for cigar wrappers was produced in the Connecticut River Valley. Selective breeding resulted in Connecticut Broadleaf, a superior strain of tobacco that became prized for the outer wrapper of cigars. As the reputation of the prized Connecticut Broadleaf proliferated, cigar making moved from the tobacco farm to the “manufactory.” While the greatest crops were harvested in Connecticut and Massachusetts, a relatively smaller number of tobacco farms dotted the landscape just north of the Massachusetts-Vermont border and, for a time, produced crops of exceptionally high value

In Vermont, growing wrapper leaf occurred later than in Connecticut and Massachusetts, but once established, the valley, south of the town of Windsor saw a six-fold increase in production between 1860 and 1870.

But by the 1890s, the famed leaf of the Connecticut River Valley was no longer in demand. From Windsor to the mouth of the Connecticut River this economically important crop had been supplanted by tobacco from the Indonesian island of Sumatra. This imported leaf was unquestionably superior for wrapping cigars, and the New England tobacco farmers were, for a time, nearly put out of business.

Then, the U.S. Department of Agriculture’s leading tobacco expert, Marcus Floyd, visited Sumatra and discovered the secret to their fine leaf production. They were growing their tobacco under a slatted canopy to ameliorate the effects of the bright sun. The result was a more delicate, thinner-veined leaf that became the standard for cigar-wrapper. In Connecticut, an experimental plot of 50 acres was tested in 1900, and by 1910, according to Dawn Hutchins in Laboring in the Shade, shade tobacco had demonstrated its efficacy in the Nutmeg State and became one of the most important agricultural crops in New England..

Elizabeth Ramsey’s “History of Tobacco in the Connecticut River Valley,” described what went into handmade cigars:

A cigar consists of three parts, the filler, the binder (which is used to keep the filler in the form of a cigar), and the wrapper. Eventually the shade-grown leaf from New England became the de facto choice for American-made cigars.

In the latter half of the 19th century, the components for cigar-making were shipped to tobacconists and cigar manufactories throughout America. Eugene Marrion’s tobacco shop in Barre was located at the corner of Deport Square and North Main Street (the location of today’s Quarry Restaurant.) The store front on Main Street was a typical tobacco shop, selling cigars, pipes, tobacco and related accessories. In the back of the building was the cigar manufactory.

“Those among our population who enjoy the weed have, for the past five years been agreeably familiar with the product of Mr. Marrion. It has long been recognized in this community that the product of this cigar factory has reached perfection. The factory is a model of neatness and is operated by the most skilled union labor.

Every cigar made is a perfect, long, clean, sweet smoke, that brings satisfaction in the fullest degree to the smoker, and, those looking for the best that money can buy should insist on having the (Imperial 10) or the best ‘Marrion’s Best 5.’”

A more prosaic variety was the “Barre Smokers” — a cigar whose only attribute seemed to be that it was Union Made — most likely a good characteristic in a strong labor town like Barre.

Eugene Marrion had come to Barre in 1888 to manage Hecker’s Cigar Store, eventually entering business for himself. According to his 1906 obituary, he ran a very successful business at the Corner Cigar Store until he succumbed to tuberculosis. He was just 44 years old when he died. Eugene’s brother George took over the business and ran it for the next 25 years, establishing the enterprise as a Barre institution. George was a great sports fan and patrons of the cigar store could be seen and heard discussing prize fights and baseball games. George was an avid golfer and won the Vermont State Golf Championship in 1913. He was also a past president of the Cigar Makers Union of Barre.

Situated near two railroad stations, by 1912, George had rechristened his cigar shop “The Heart of Barre.” He explained why in a newspaper advertisement:

I believe it is the most popular store in Barre. At all hours we try to serve you. Our telephone is always ringing. Housewives call us up to find the correct time. We cash your checks. We change your large bills. Granite manufacturers call us up for granite cutters, lumpers, blacksmiths, polishers. You ask us to tell you’re the departure and arrival of trains. You call us for all the sports results. You find employment from the ads in our window. When the fire alarm rings we tell you where the fire is. When strangers arrive in Barre, they come to us. And on Christmas Day, every person that enters this popular store receives a present of five fine cigars.”

The true pioneer of the cigar manufactory in central Vermont was Arthur Allen of Montpelier who had a cigar shop in Montpelier’s Rialto Block. Allen was from London, England, and came to the United States at age 33 to follow the trade of making cigars. He arrived in Montpelier in 1869 to work in John Payne’s new cigar factory but within a year, entered business for himself. In 1880, he moved his enterprise to the Rialto Block, which had long been identified with his trade. For almost 20 years he practiced his craft, built a loyal following, and raised a family in Montpelier. One brief description of his business in The Watchman for Apr. 28, 1886’ opined,

“If man will smoke and smoke they will, it is well that they smoke wisely. The recent investigations by the Board of Health of New York City into the tenement-house system of that city revealed the fact that many cigars manufactured there were made not only in filthy places, buy by persons afflicted with infectious disease. It therefore behooves our readers to purchase their cigars from parties who, in the manufacture, use every pains to be clean and to have their goods manufactured not only of the best material, but in a careful manner. We notice here in Montpelier Mr. A. Allen, who is located on State Street, manufactures his own cigars, and those people who purchase here may rest assured that no pains are spared to have the Allen’s Best as perfect as possible.”

The last evidence by which the family knew that the deceased was living this morning was one of the members hearing him cough about half past seven, and it is believed he died in his sleep.

Paul Heller is a writer and historian who lives in Barre.