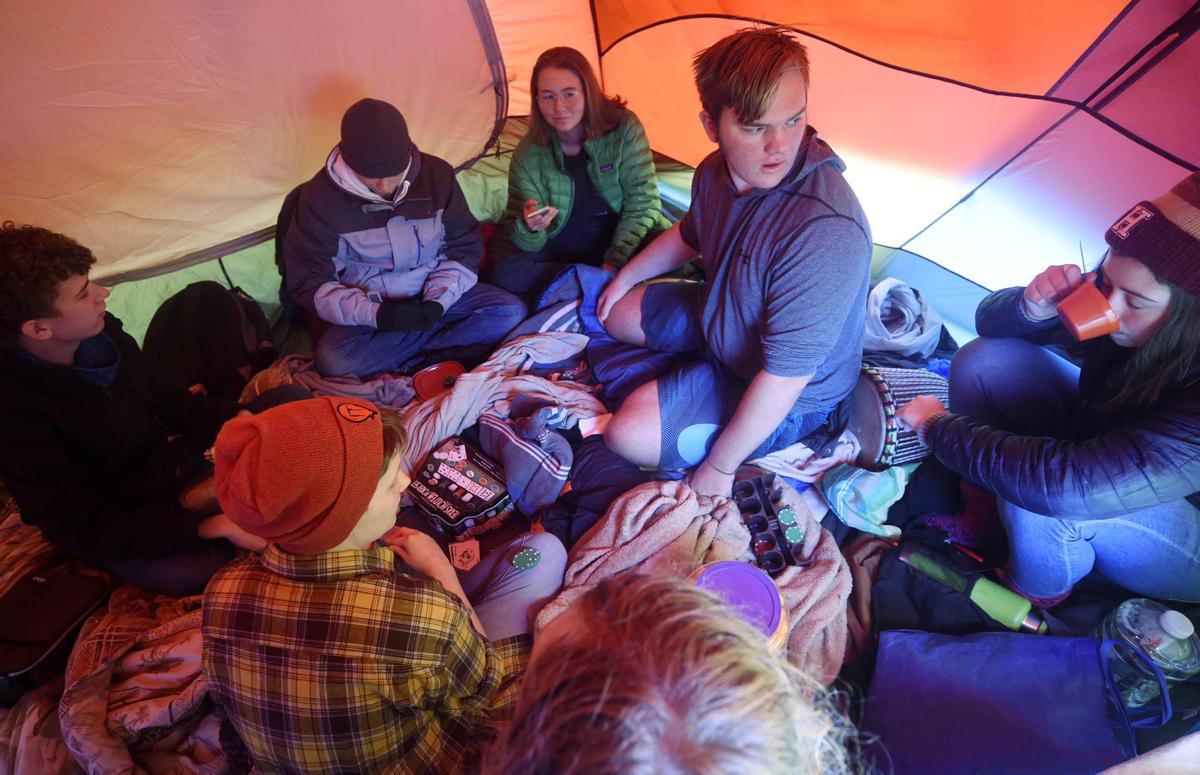 The State House lawn in Montpelier has been transformed into a colorful tent town for an event dubbed the Climate Encampment: Youth, Migration and Agriculture. The 48-hour encampment, organized by Extinction Rebellion Vermont, is happening as part of three weeks of global action on climate change. Local activists are challenging political and civic leaders to do more to combat climate change. Above, student activists relax in a tent between workshop sessions Friday. 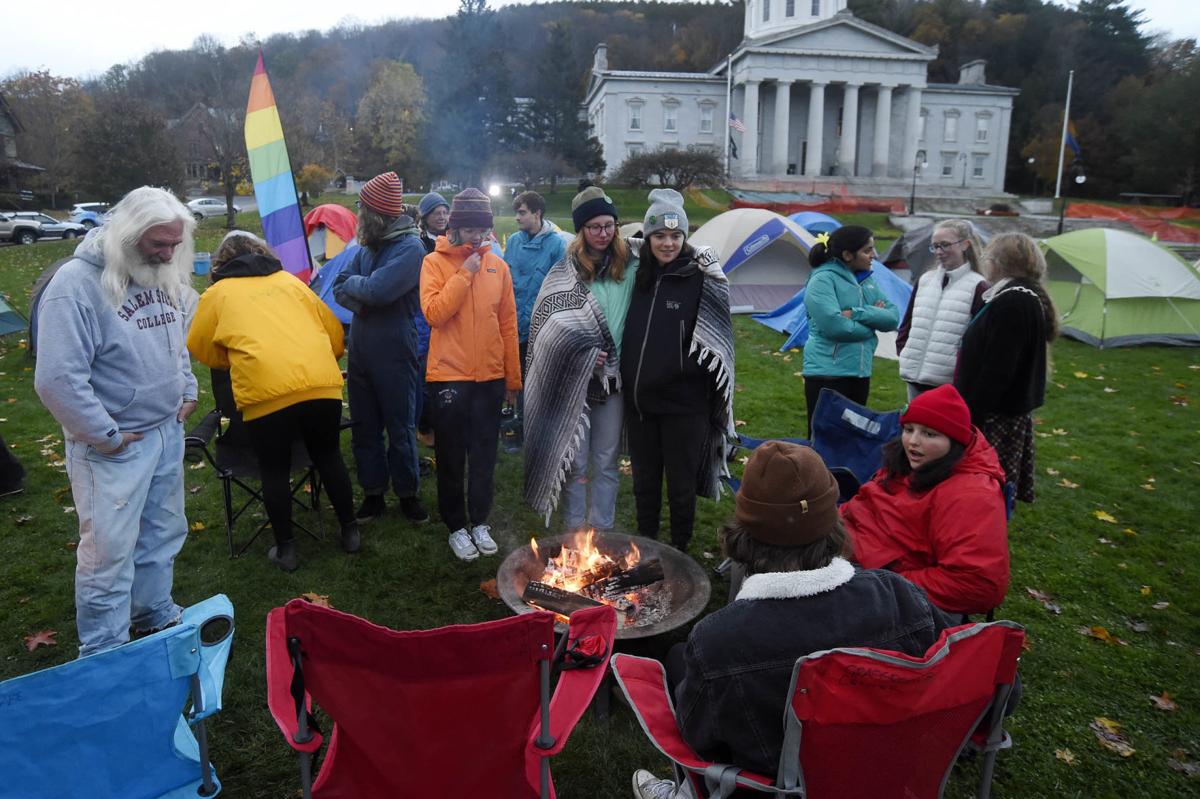 Climate activists stay warm by a fire during a 48-hour encampment on the lawn of the State House in Montpelier Friday.

The State House lawn in Montpelier has been transformed into a colorful tent town for an event dubbed the Climate Encampment: Youth, Migration and Agriculture. The 48-hour encampment, organized by Extinction Rebellion Vermont, is happening as part of three weeks of global action on climate change. Local activists are challenging political and civic leaders to do more to combat climate change. Above, student activists relax in a tent between workshop sessions Friday.

Climate activists stay warm by a fire during a 48-hour encampment on the lawn of the State House in Montpelier Friday.

MONTPELIER — Activists braved bad weather this week, camping out at the State House to campaign for immediate action on climate change.

The encampment began at 4 p.m. Thursday in pouring rain and high winds, and will remain until 4 p.m. Saturday, when sunnier, warmer conditions are forecast.

Richardson-Skinder said she was concerned about the impact of extreme weather events on the economy and agriculture in the south, creating a migration and humanitarian crisis.

Richardson-Skinder said it was only a matter of time before the crisis would affect Vermont, hence the need to prepare and lobby lawmakers to respond.

“Young people in Vermont understand that our futures are at stake and we are working toward a just transition away from fossil fuels that includes a focus on frontline communities, including migrants,” Richardson-Skinder said in her proposal. “We need to create local food systems to address food and economic security for those who live here and those who are seeking refuge.”

XRVT organizers stressed — and Buildings and General Services Deputy Commissioner Jennifer Fitch confirmed — that the climate encampment at the State House was an unpermitted protest. Fitch said Capitol Police and BGS security staff would monitor the encampment activities and call on local law enforcement, if needed.

Part of XRVT’s strategy is acts of civil disobedience, such as the unpermitted event.

However, when setting up on Thursday afternoon, there were signs of a soft response by state officials to the climate encampment.

XRVT organizers said their request to draw power from outlets on the State House lawn would not be honored, but the power was on when they arrived. BGS also rented porta-potty units to serve the climate encampment. When activists built fires in steel urn fire pits to keep warm, BGS security staff asked they be extinguished or the Montpelier Fire Department would be called, but the fire department was never summoned. When BGS security staff returned to speak to organizers again, they ended up helping secure a tent that was dislodged by the wind.

Workshops on Thursday included “Heading for Extinction” by XRVT activist Dan Batten, of Bristol. He highlighted dire warnings by the United Nations’ Intergovernmental Panel on Climate Change and other studies that predicted world leaders had a decade to tackle the issue or face irreversible damage that threatened the survival of all species.

In another workshop, Bob Atchinson, of Plainfield, presented the top 10 strategies listed in the book “Drawdown” to combat climate change. They included reducing the energy use of refrigeration and air conditioning and the atmospheric damage caused by chlorofluorocarbon coolants used in those systems; reducing food waste and refining agricultural practices; and greater use of wind, solar and other renewable energy sources.

Atchison is also a member of the Vermont State Employees Association, representing 6,200 state employees who successfully lobbied the union last month to adopt a resolution declaring a climate emergency.

Outside on the lawn, students and other activists were engaged in planning strategies for future protests and actions to tackle climate change.

Viviana Dorfman, 23, of Middlesex, said that even if immediate action were taken to address climate change, it would only marginally alter the outcome.

“The question for me is, how are we going to manage it when it does get bad?” said Dorfman, who had studied urban and regional planning.

“Through my education, I’ve come to the idea of supporting reactivating dying cities,” Dorfman said. “Living in cities, we’re not going to be able provide everything for ourselves. The possibility that we would be able to provide 50% or 70% of the produce we need and not be reliant on people thousands of miles away (to provide food) is about resilience.”

Dorfman said there also needed to be a greater understanding about the impact of climate change on social structures.

“The climate crisis is a migration crisis,” she said.

“We have a huge focus on agriculture and migrant justice and climate justice, obviously, and tying those altogether,” Markow said.

Asa Skinder, a Middlebury College student, has been a core member of students in the Extinction Rebellion Vermont movement. Despite being arrested during a deliberate disruption at the State House that forced the House to adjourn in August, he was back this week, recording video for a documentary about the encampment.

“I think we should all be concerned about futures and the future of the world and the people that are being affected now,” he said.

Events on Friday included keynote speeches about Abenaki rights in Vermont, ethnic and social equity in schools, and justice for Palestinians. Plans for the evening included a meal catered by the interfaith community and music and a dance party.

Events on Saturday will include a people’s assembly on the State House steps, from 9:30 to 11 a.m.

Climate activist Henry Harris, of Marshfield, who worked for the National Lawyers Guild for 15 years, said the encampment was a success.

“Things are going exceptionally well, and we’ve managed to get a lot of people down here in terrible weather,” Harris said. “It’s really clear that a lot of people agree that we have to join with each other and with other vulnerable communities all around the region and all around the world to make our own plans to deal with a climate emergency because the Legislature is not capable of accomplishing anything.”