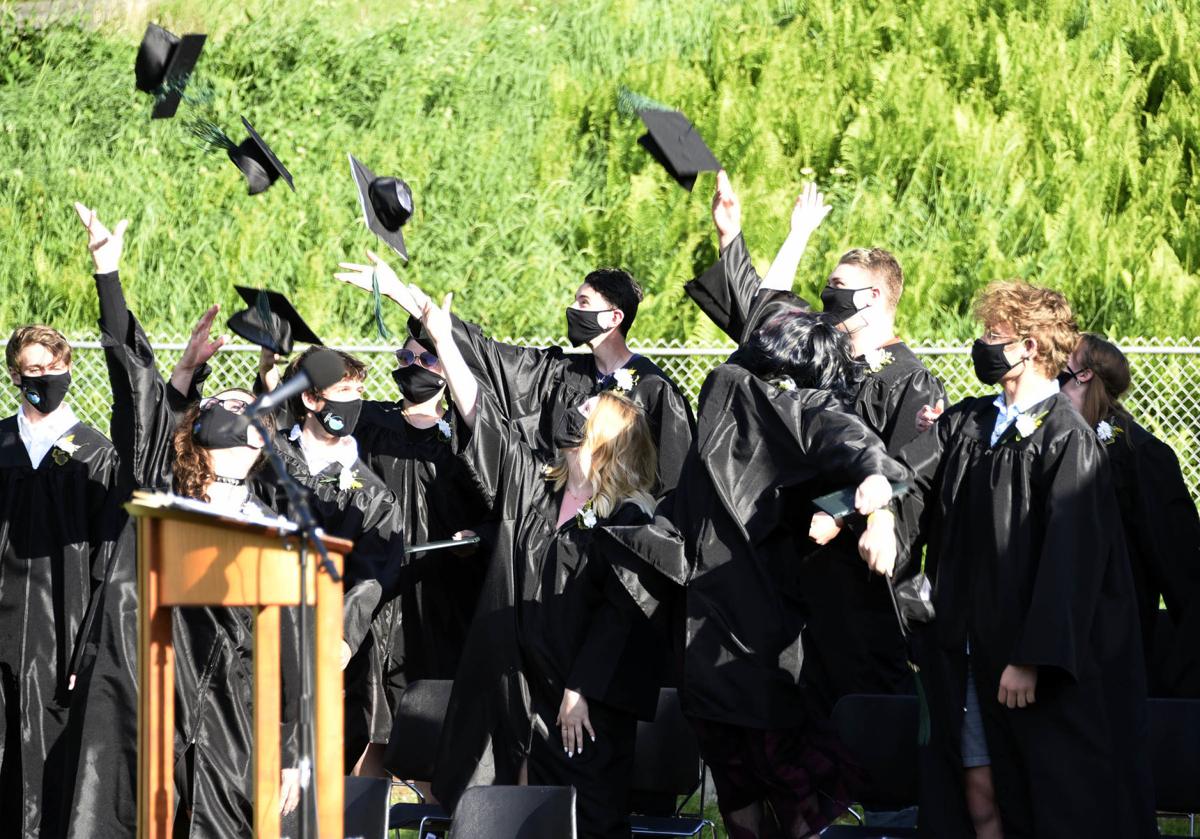 Cabot High School graduates toss their caps in the air following the conclusion of their commencement ceremony on Wednesday. 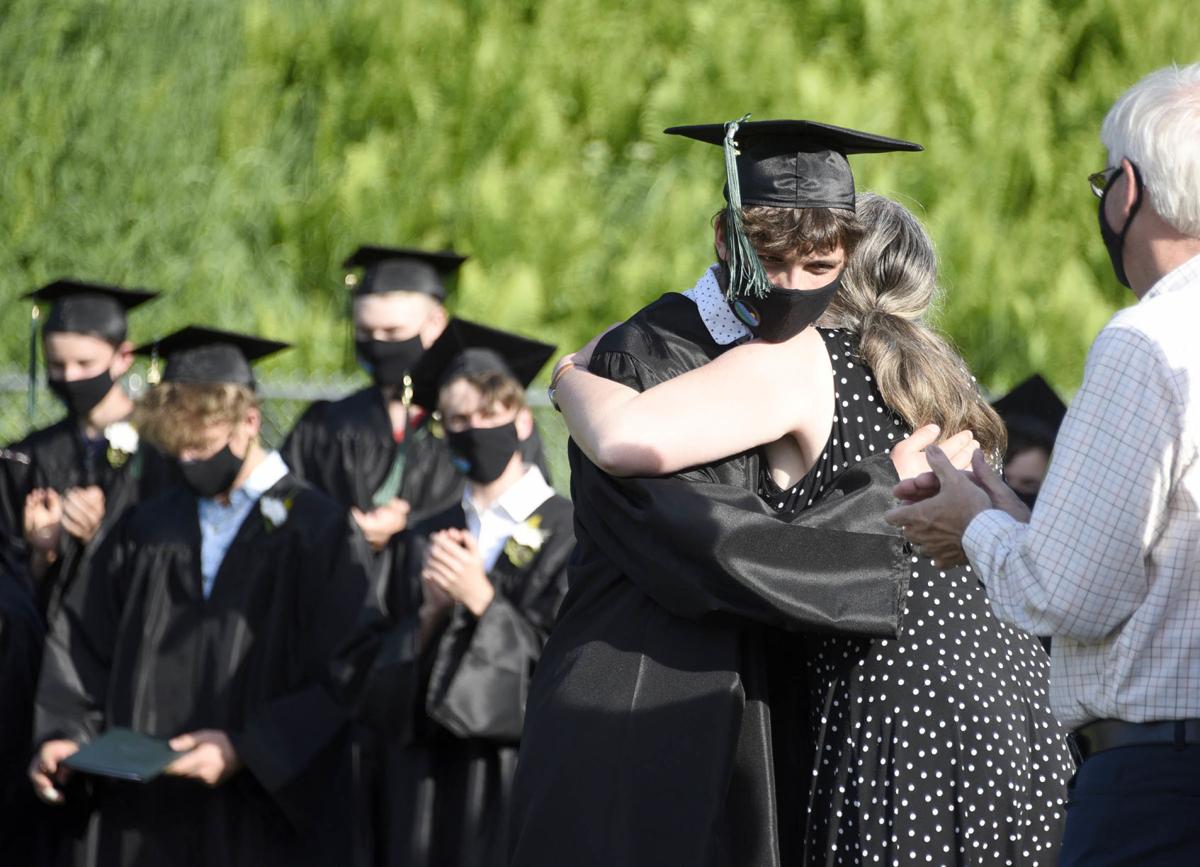 Graduating Cabot High School senior Aiden Morse hugs his mother, Lisa Olson, chair of the Cabot School Board, after receiving his diploma at the school’s commencement ceremony on Wednesday.

Cabot High School graduates toss their caps in the air following the conclusion of their commencement ceremony on Wednesday.

Graduating Cabot High School senior Aiden Morse hugs his mother, Lisa Olson, chair of the Cabot School Board, after receiving his diploma at the school’s commencement ceremony on Wednesday.

CABOT — The community sang away the 10 students who graduated from Cabot High School on Wednesday.

The event was held outside on the lawn of the Cabot School Performing Arts Center and included two students who graduated in 2020 because they weren’t allowed to have a traditional ceremony because of the coronavirus pandemic.

Rebecca Tatistcheff, the school’s principal, teared up when she started to give her address to the graduating class and the friends and family in attendance.

“We haven’t been together for so long, and it is just thrilling to invite you back on to our campus to celebrate these fabulous graduates,” Tatistcheff said.

“This past year and a half, you have taken on more than any other moment. You have been teachers and cheerleaders. You have been partners as you navigated alongside these remarkable young people during some of the most challenging and uncertain times in history,” she said.

The guest speaker was Alex Macomber, an English teacher whose career started at Cabot in the fall of 2018. Macomber talked about meeting the graduates, who were sophomores at the time, and how sure the teacher was that there would be some stumbles along the way.

“But judging from where they are right now, I guess things turned out all right. And my goodness, they have come so far since then,” Macomber said.

“I say we did these things, but really that’s a bit of a misnomer. You did these things. You all demonstrated more interest in your own learning and support for one another than I have ever seen in individuals your age. I am truly in awe of every one of you,” Macomber said.

Those in the audience then serenaded the graduates with the song “End of the Line” by the Traveling Wilburys. Tatistcheff said in past years the graduation ceremony included a community/parent chorus that sang to the students, but that part of the ceremony had to be tweaked this year.

Graduate Jonah Socks said it’s been a long 14 months, but they all pulled through and he’s proud of his classmates. Socks said fellow students had to deal with feelings of uselessness after so many days of having to stay home.

“Despite this, we survived and came out the other side as more intelligent, wise and respectable human beings,” Socks said.

Graduate Aiden Morse said Cabot is different from other public schools. Morse said the school doesn’t just teach its students to be good workers, learners and community members. Morse said it teaches them who they are and pushes them to do the things they really want to do.

Louis Searles spoke for the Class of 2020. Searles recounted what it was like when the school year abruptly came to a halt in March 2020.

“In the end, it all worked out. We spent that trimester in the surreal and uncanny landscape of Zoom. Spent it on the front lines of a new form of musical theater. Spent it as journalists, innovators, scientists, creators and researchers. With the incredible and invaluable dedication, skill and determination of our faculty and staff, we rolled with every punch, pivoted everywhere we needed to and held our ground everywhere else. We created work from the ground up that I could not be more proud of,” Searles said.

The ceremony also featured a member of the community who is no longer there.

Peter Ackermann, the school’s long-serving facilities director who retired in 2019, died on July 21, 2020, at the age of 64. Members of Ackermann’s family were in attendance for the ceremony where the school’s gymnasium was named after him. He was remembered as a dedicated worker who cared deeply about the school and its students.

Lisa Olsen, the School Board chair, said he was “an essential part of our school community.”

Olsen said he would work with teachers to solve issues in their classrooms and would get the students involved in different projects around campus.

“He was always smiling and happy to help with anything,” she said.

Ackermann was caught by surprise when he was given the Cabot Community Service Award at the graduation ceremony in 2019.