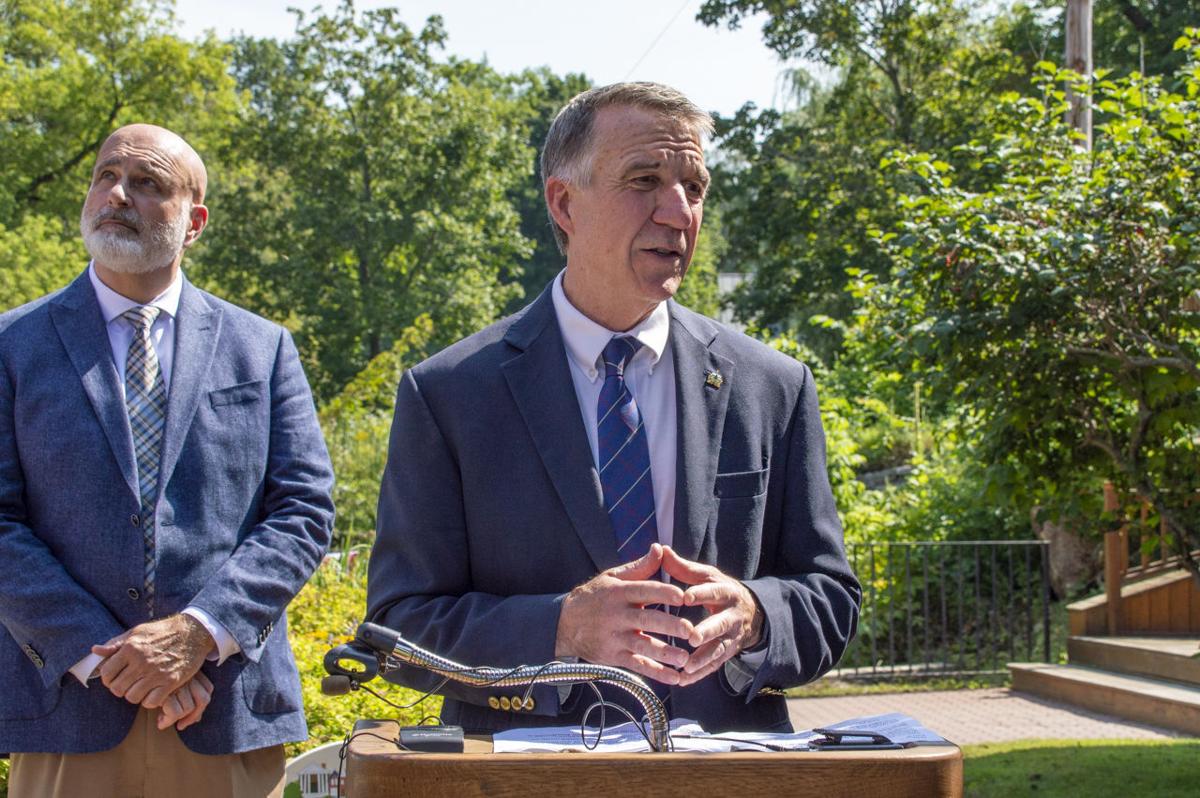 In Brandon, Gov. Phil Scott speaks to the media about the 10-year mark since Tropical Storm Irene struck Vermont. 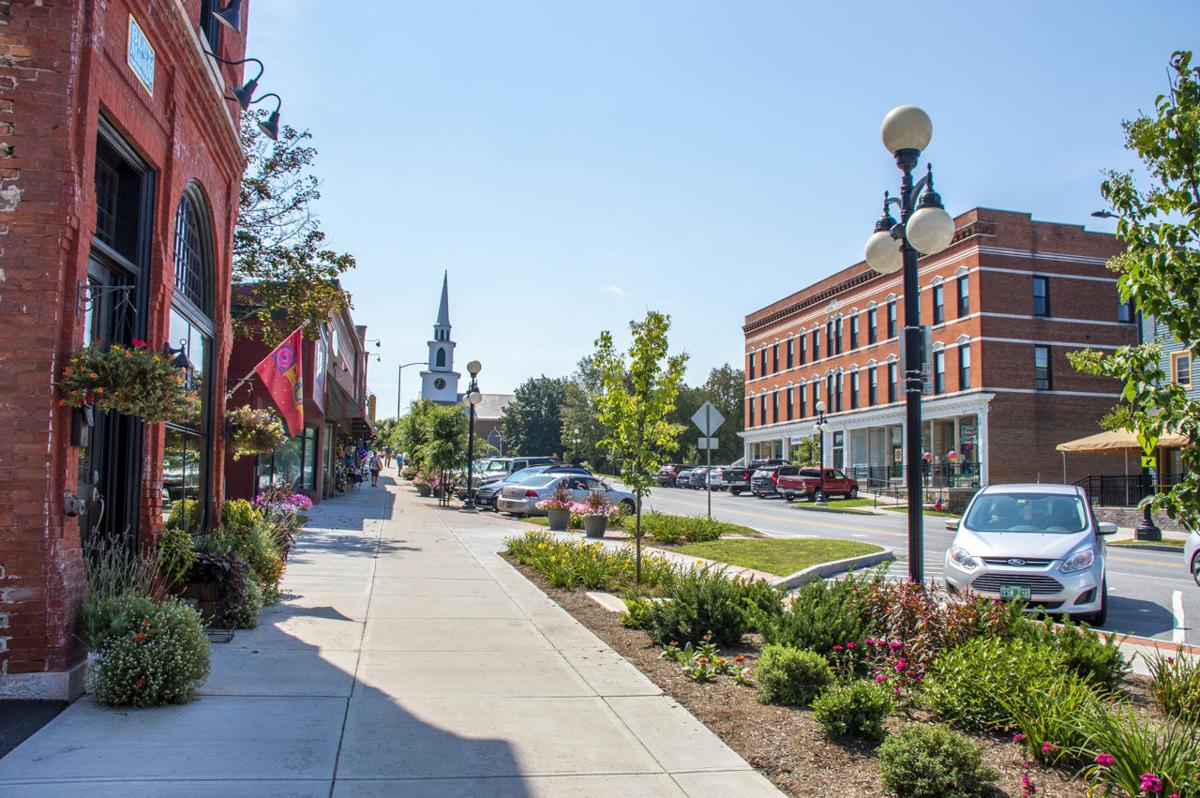 Brandon’s infrastructure has received a lot of attention during the 10 years since Tropical Storm Irene blew through Vermont.

In Brandon, Gov. Phil Scott speaks to the media about the 10-year mark since Tropical Storm Irene struck Vermont.

Brandon’s infrastructure has received a lot of attention during the 10 years since Tropical Storm Irene blew through Vermont.

BRANDON — While he spoke from the middle of Brandon, Gov. Phil Scott, on the 10-year anniversary of Tropical Storm Irene, remembered Vermonters from all over.

“It was one of the worst natural disasters in Vermont’s history, leaving behind hundreds of millions of dollars in damages to roads, bridges and other infrastructure, and worst of all, seven people dead,” said Scott.

While the storm was a terrible one, Scott said it brought out the best in Vermonters.

“There are so many stories to tell,” said Scott. “I remember… I was here in Brandon, obviously early in the crisis, but then went out to other areas as well. One that I remember was going to Woodstock, and going to the Woodstock Co-Op, which was right next to the Vermont Standard. The Vermont Standard was knocked off its foundation and was unable to use the entrance. The co-op was mucked up with about three feet of all kinds of debris. And I saw people swarming the co-op, working together with a skid steer inside the building, as well as working by hand.”

He spoke to a person there helping. The man had no connection to the co-op or to the town, or even to Vermont, living across the river in New Hampshire.

The folks in Bridgewater particularly impressed him, he said. Scott, who was lieutenant governor during Irene, said he and his people were some of the first to make contact with the town after it was cut off by the storm.

“They had already planned ahead, they were getting food and medicine to those who couldn’t access the roads,” he said. “There was a person on dialysis and they arranged to have a helicopter come in and take that person out.”

He said Bridgewater’s organization and efforts had a ripple effect in the area, speeding the recovery.

“That’s a couple of examples,” he said. “There were countless acts of courage, people not only helping neighbors but total strangers as well. They worked tirelessly as a community to muck out homes and businesses. And then there’s our emergency responders who put in long days and nights for weeks to protect the lives and livelihoods of Vermonters, and the State Emergency Operations Center, again, with representatives from nearly all state agencies working around the clock for weeks.”

The Agency of Transportation and private contractors immediately began working to open the damaged roads, ultimately fixing up 500 miles of roadway, according to Scott.

He recalled the Brandon House of Pizza having been moved into Route 7 by the flood. Scott said he called Dave Demag, who owned a crane service, who said he could have a crane there from New York by the next day.

He noted the work done by the Markowskis and the Casellas. He recalls coming up to Doug Casella while Casella was running a grader on Route 4, trying to get the road open.

“I saw him up there working and he saw me coming. … He literally left the grader, almost running, and he jumped out to come talk to me, because he had something important to say. He told me, he said, ‘We can get this Route 4 opened back up, but we’re going to need some cooperation from the state, we need some restrictions lifted, we need to get our off-road trucks so they can go down to the bottom of Route 4 and take all the debris we lost from Route 4 and bring it back up.”

Scott said he contacted Gov. Peter Shumlin and was able to get the red tape out of the way.

“This was truly all hands on deck; it’s something we’ve seen shine through again and again during the past year and a half in our pandemic response,” said Scott.

Brandon Town Manager David Atherton was on the Select Board when the storm hit.

“Resiliency, I think that’s what we all learned in Brandon,” he said, following the governor’s remarks. “We had a pretty big mess down here after Irene, and as we picked up the pieces over the years, we learned a lot in the process.”

Many of those lessons were what kind of infrastructure was needed to manage powerful storms. He noted an overflow culvert installed in the intervening years since Irene.

“Forty days after we finished the construction of it, we had a flood almost the size of Irene, July 1 of 2017; the culvert saved our town,” he said. “We continue to do a lot of flood mitigation projects in town, Newton Road being one with property buyouts, and we’re continuing to do more. I think we’ve become more aware of areas that are prone to flooding and we’re working constantly to mitigate those areas.”

After Scott left, Atherton and several state officials went to Newton Road across from High Pond Woodworks to see where a little over half a dozen properties were bought using federal dollars and removed, as the area is prone to flooding.

Other state officials talked about the events of 10 years ago.

Transportation Secretary Joe Flynn, who managed the AOT’s response in southern Vermont, said he spent three months working out of Dummerston after the storm.

“What I saw there, quite frankly, truly shocked me. Homes were torn in half, many completely moved away from their foundations, cars were tossed about like toys, and piles of debris were higher than houses,” he said, adding that roads and bridges were impassable and that 13 Vermont towns had no contact with anyone outside their borders for days.

“What we witnessed that day and in the days, weeks and months to follow was truly remarkable in both the destructive force of Irene and the force of will in Vermont to respond and recover,” he said. “Vermont took a hard knock from Tropical Storm Irene, but Vermont did not stay down, she rose up and she rose up stronger.”

“For the next three months, we worked around the clock to provide much needed support and resources to Vermonters who had been so grievously impacted,” she said. “In many ways, Irene was a turning point for emergency management in the state. That storm taught us many lessons about catastrophic incident response, recovery, and the need to think strategically about the impacts of storms.”

She credited the leadership of Ross Nagy and Peter Coffey, both of whom have since retired from Vermont Emergency Management who were in Brandon Wednesday.

“Their leadership and tenacity in the aftermath of the storm set the example for the rest of us to follow,” she said. “Many of us had never experienced anything on the scale of Irene and their professionalism and guidance during that incredible time were qualities I personally try to emulate in every storm response since.”