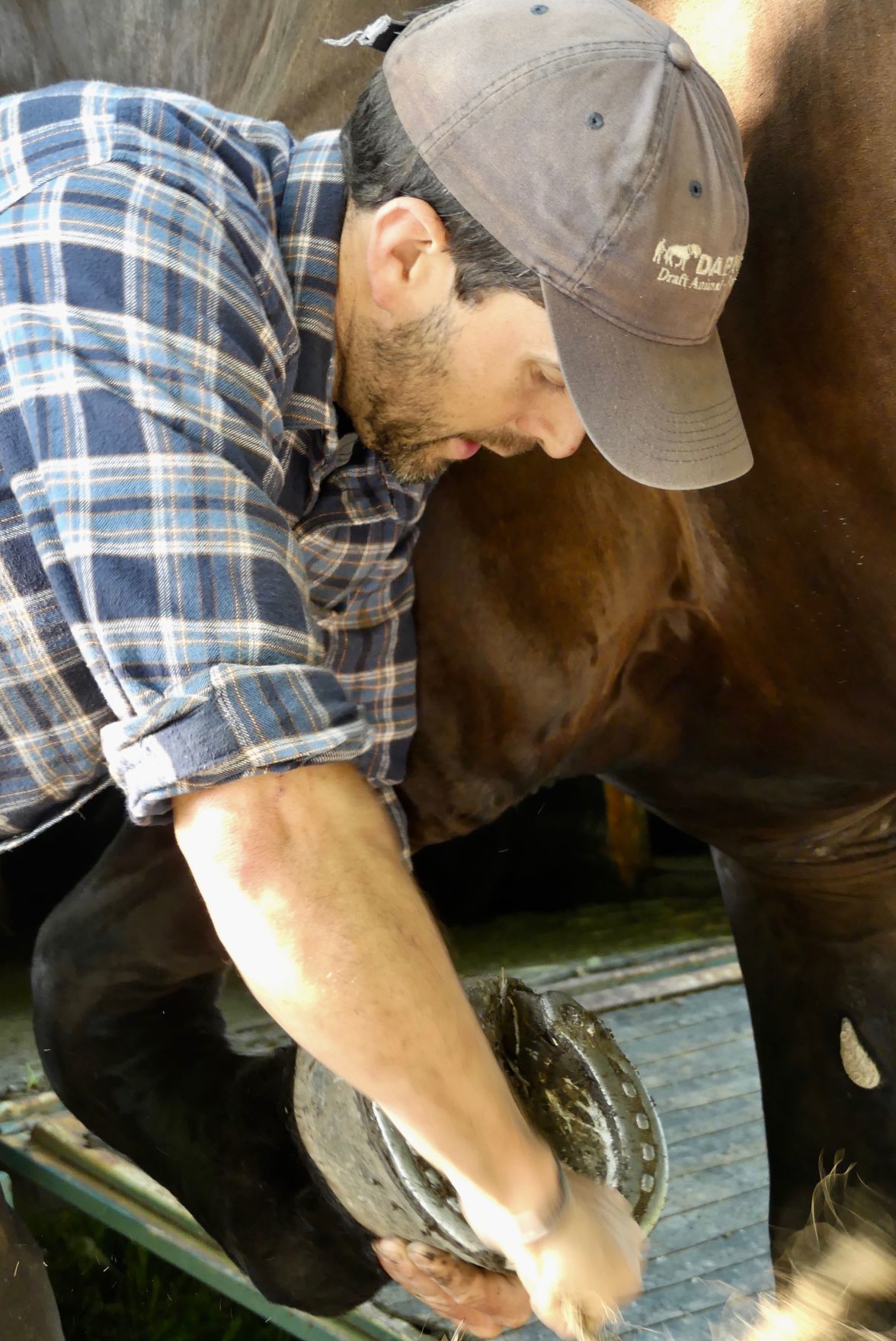 Brad Johnson works on the foot of one of the draft horses. 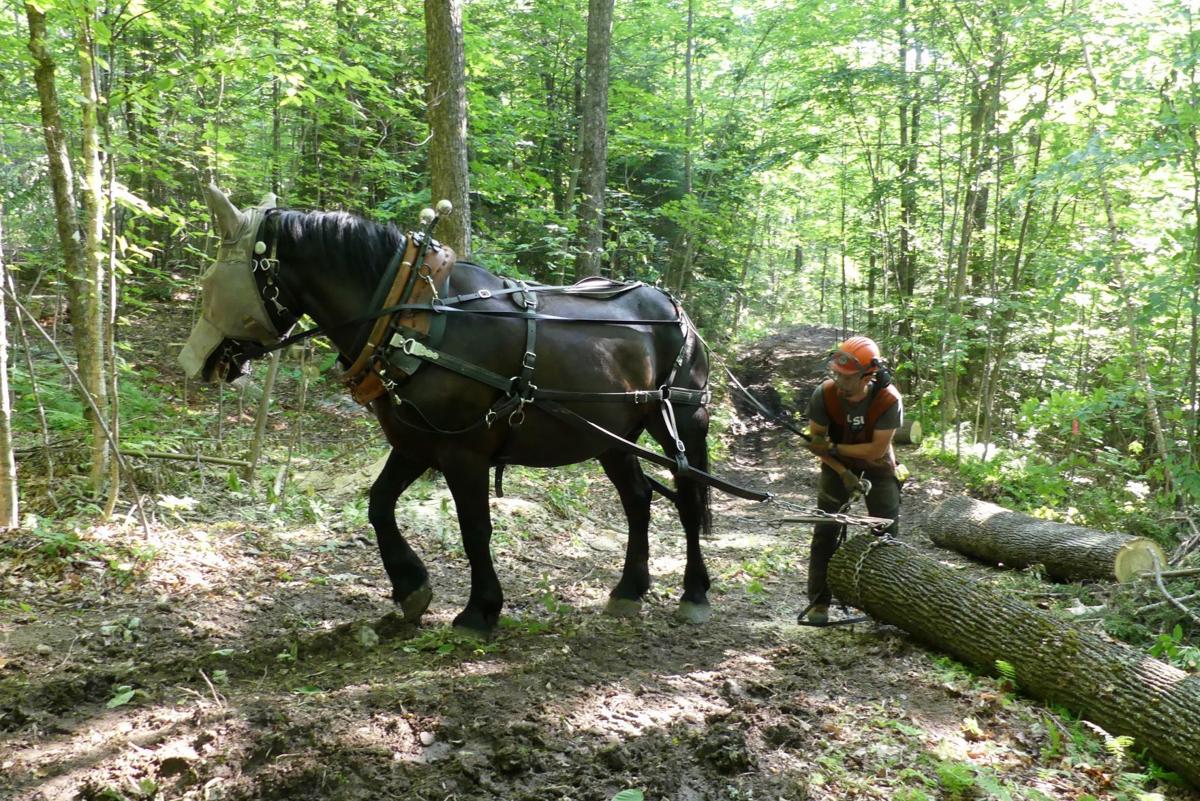 Working with one of the horses to move some ash logs. 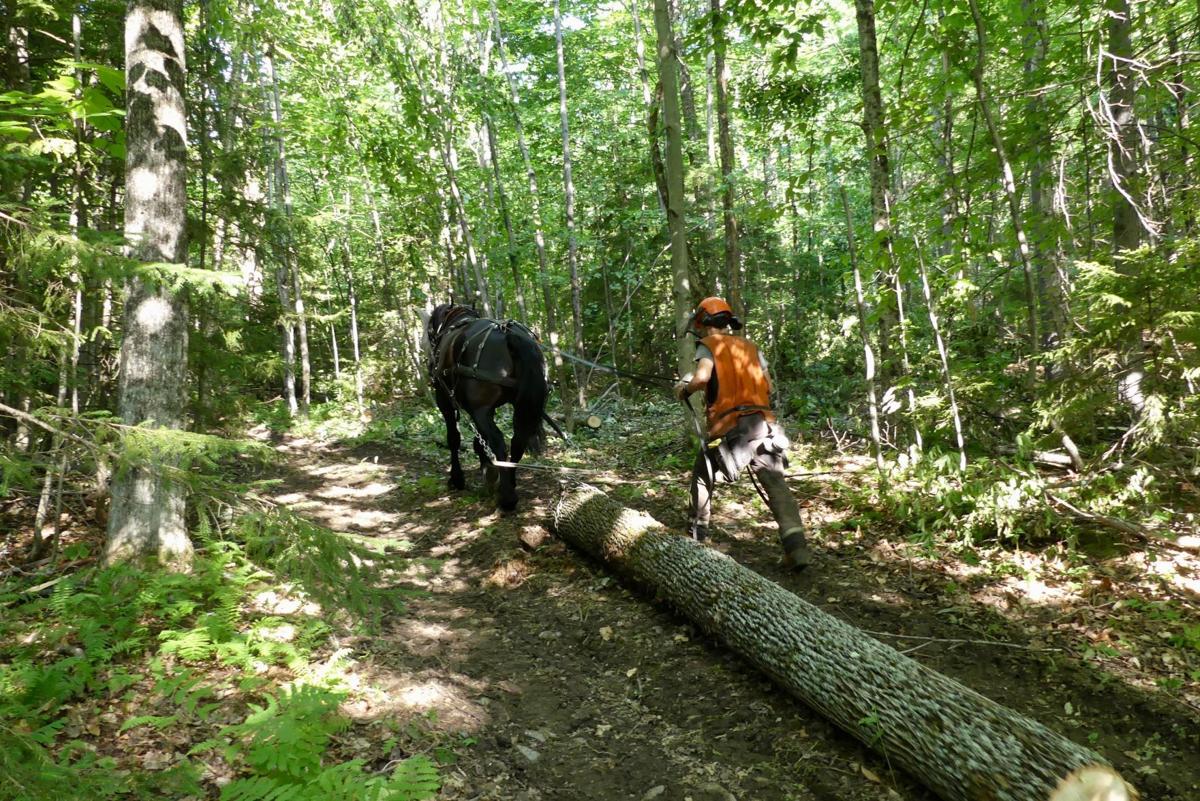 The horses have a much lower impact on the landscape than a skidder and other machinery.

Brad Johnson works on the foot of one of the draft horses.

Working with one of the horses to move some ash logs.

The horses have a much lower impact on the landscape than a skidder and other machinery.

When Brad Johnson and Derek O’Toole talk about horsepower, they’re talking about actual horse power. The two men are co-owners of Third Branch Horse Logging, of Braintree, which uses draft horses for logging and other forest management jobs.

“We use both draft horses and small machinery to carry out positive impact logging. Our low-impact tools and mindful approach allow us to accomplish results that are ecologically sensitive and promote long-term sustainable outcomes,” Johnson said.

Third Branch Horse Logging was started October 2018. Both Johnson and O’Toole had been working with draft horses for farming. When they formed their company they shifted their focus to using horses in the woods.

“The goal of our decision was to optimize the practical application of draft power in a modern setting. Long-term viability of horse power and ecological sustainability is central to our mission.” Johnson said.

Third Branch is not “anti heavy machinery” according to O’Toole. “We’re just offering a different model. We feel horses are still a relevant tool.”

Kathleen Wanner, executive director for the Vermont Woodlands Association, based in Rutland, is a strong supporter of horse-powered logging.

“Horse logging is very low touch on the land. It may not work for every landowner but for some it is the perfect choice,” she said. VWA is a nonprofit association of landowners whose mission is to advocate for the management, enjoyment and sustainability of Vermont forests.

According to O’Toole, he and Johnson use their three draft horses (two Belgians and a Percheron) for as much of the work as possible, because using horses instead of a tractor or heavy skidder lessens the damage to the land and also because the horses are nimble and can go where a tractor cannot go.

“Nothing has come on the market that can move as much weight and move through a three-foot gap,” O’Toole said.

“There is still damage, these horses weigh over a ton, but the damage is minimized,” Johnson said.

Johnson and O’Toole cut the trees into 20- and 16-foot lengths rather than drag full trees, which also helps minimize damage to the land. Johnson has worked with draft horses for 20 years; O’Toole, eight.

“We work with them, they don’t work for us,” Johnson said.

According to Johnson, Third Branch Horse Logging works with foresters and landowners for tree harvests and does so in compliance with current land use management plans. The company does not buy trees from landowners, as many logging operations do, but instead provides the contract logging services for the landowner that includes everything needed to complete the job from cutting the trees to selling the wood.

The ash trees from their most recent job, on land owned by Steve Twombly. of Roxbury, are being shipped to a mill in Wallingford for use by the True Temper tool company.

“The trees we harvest are used for everything you can think of: from lumber, to wood for tools and furniture, to firewood,” Johnson said.

Johnson and O’Toole also use the horses for other farm roles including haying, cultivating and collecting maple sap.

“We utilize horses and small tractors to minimize ground disturbance in close proximity to homes. Clients appreciate our attention to detail,” Johnson said.

Logging and clearing the forest by using draft horses rather than large machines often is referred to as restorative forestry because this method can help ensure the forest’s long term health by allowing young saplings, brush and vegetation to regenerate. In addition, even though the horses weigh 1,600 pounds, they do not cause soil compaction which can greatly damage the soil.

“We try to do everything we can to let the trees become the next generation of high quality, healthy trees,” O’Toole said.

Third Branch Horse Logging is not totally horse-powered, as the company also uses a tractor and a forwarding wagon.

According to Johnson, there are only a handful of professional loggers both nationwide who use draft horses. Donn Hewes, the past president of the Draft Animal-Power Network, based in Rutland, agrees. “We don’t know the statistic but it would be a good number to know.” The use of draft animals is growing, he said, but is growing at a slow rate.

Third Branch Horse Logging cuts fewer trees per acre than many other logging companies. In addition to cutting fewer tress per acre, the total number of trees that can be harvested in a day is much smaller when using draft horses compared to using a mechanical skidder.

A team of horses can pull a load of about 150 to 200 board feet, which is equivalent to a green weight of about 1,500 pounds. A skidder can pull 20 trees at once. The maximum practical skidding distance for draft horses is about a quarter mile.

One money-saving measure, Johnson said, is Third Branch Horse Logging does the bulk of its work within a 30- to 50-mile radius of its home base. This keeps travel time and costs down. Third Branch works all year except for mud season.

“We are always seeking innovative ways to utilize horse power for modern application. In today’s world very few tools deliver as much power and leave as little impact as horses. Our horses are infinitely versatile.” Johnson said.