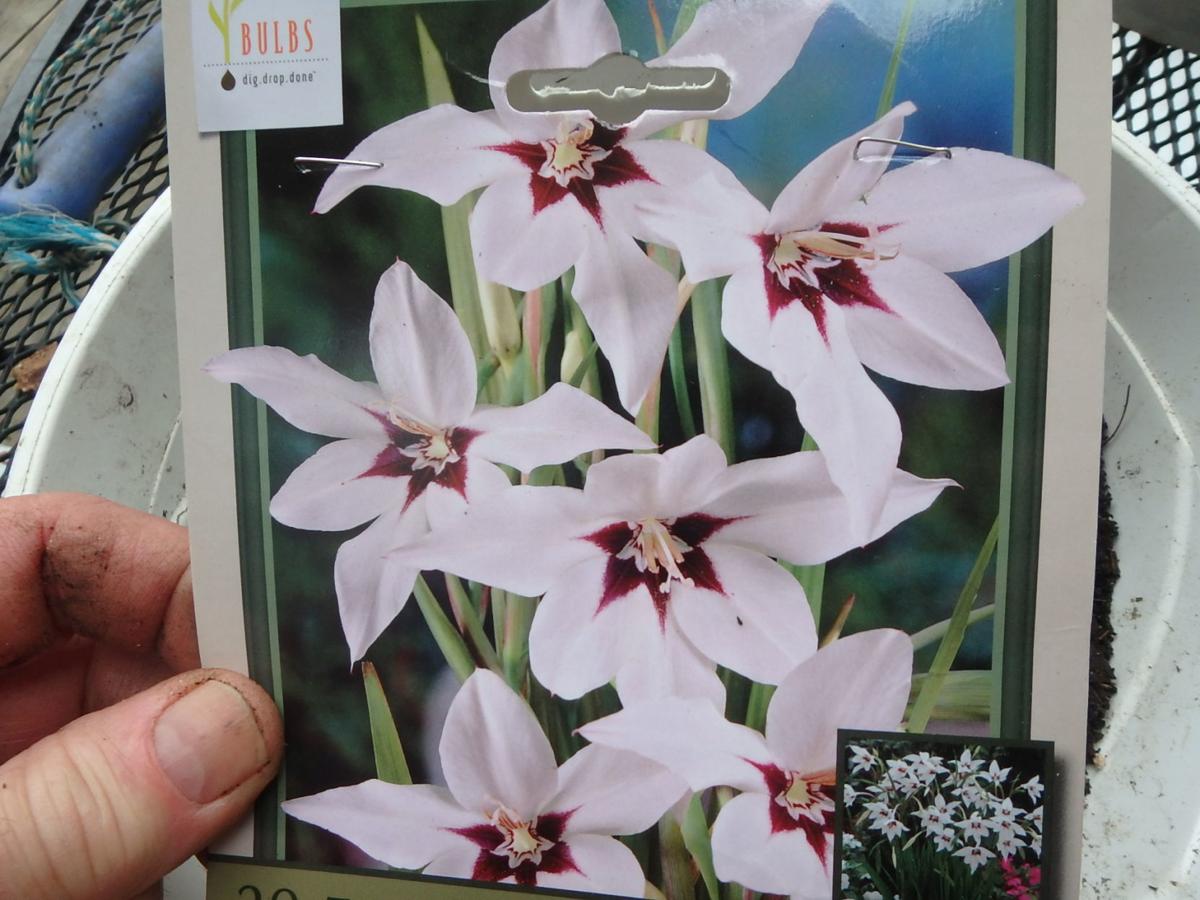 Sword lilies are easy to grow, and very fragrant. 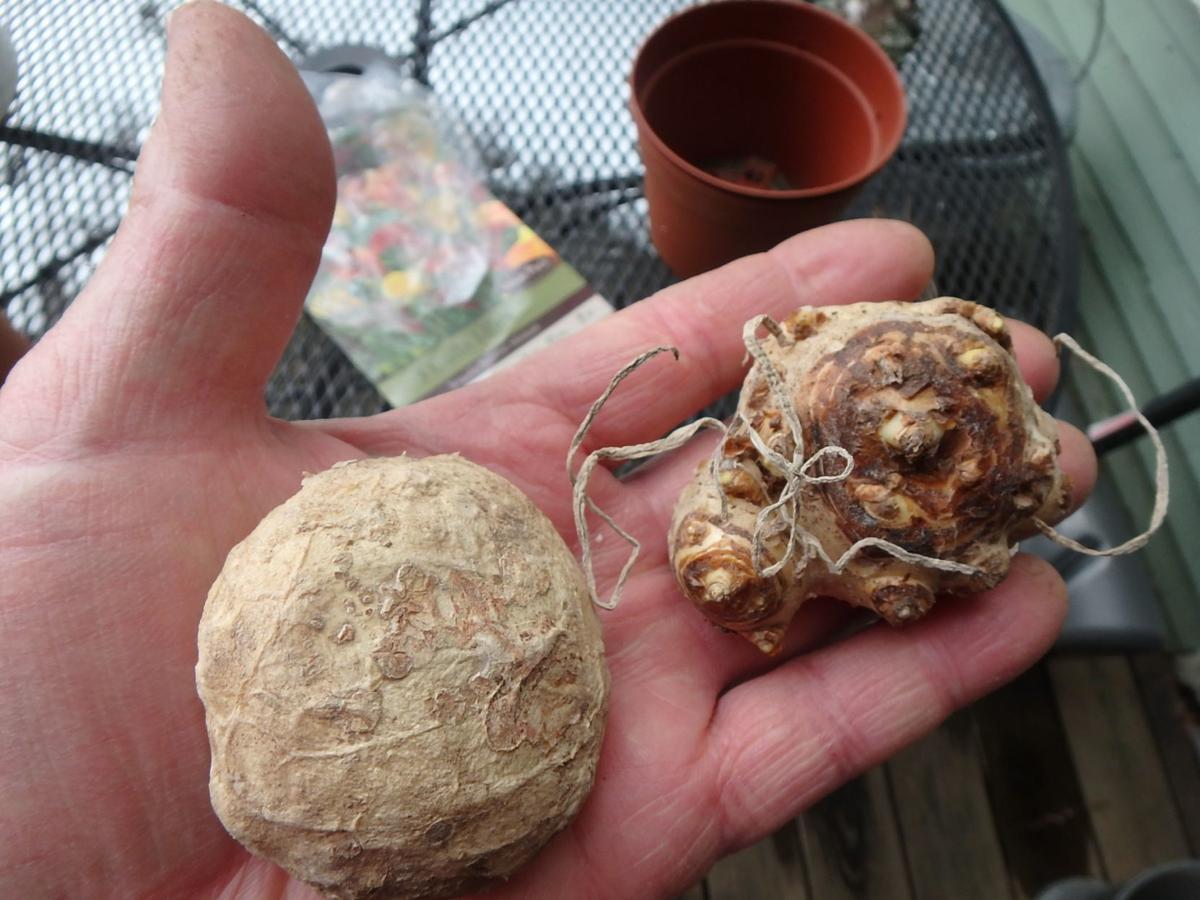 The smooth side of a calla lily goes down

Sword lilies are easy to grow, and very fragrant.

The smooth side of a calla lily goes down

If you’re home from work and champing at the bit to do something, planting some bulbs now for summer blossoms might be just your ticket. I recently got some calla lilies and sword lilies and planted them in pots.

Calla lilies (Zantedeschia aethiopica) come in various colors and sizes. The blossoms are hard to describe: They are often called trumpet shaped, but they aren’t really. Each is an asymmetrical trumpet called a spadix with a yellow spathe inside. The spathe is a narrow, pointed protrusion made of tiny flowers. You’ve seen a spathe if you’ve looked inside a Jack-in-the-pulpit.

Grocery stores often sell pots of short callas with pink blossoms, or taller white ones. These beauties are not true lilies at all, but members of the Arum family which includes Jack-in-the-Pulpit, skunk cabbage and the house plants Dieffenbachia and Philodendron.

Calla lilies are perennial in warm climates, but, like dahlias and gladiolas, must be dug and brought inside before the winter here. They are relatively inexpensive. I paid $12.99 for 3 big rhizomes (a bulb-like modified stem) at Gardeners Supply (www.gardeners.com). Now is the time to start some calla rhizomes indoors.

The calla rhizomes I planted were, at first, mysterious. Unlike daffodils or tulips, there was no obvious top or bottom. No pointy end to go up. But I did a little research and found that the smooth, rounded side goes down and the gnarly side (covered with little bumps and protrusions) goes up. They should be planted 3 to 5 inches deep, and given a square foot of soil surface for three bulbs.

I planted three calla lily bulbs in an 11-inch pot, which is a little crowded according to the recommendation on the package. Others I planted solo in 6-inch pots. In either case, it’s important to have good deep pots full of rich potting mix. I had saved plenty of last year’s potting soil at the end of the season, and I mixed it with equal quantities of composted cow manure and added a tablespoon of organic fertilizer. Later I will occasionally add some fish and seaweed fertilizer to the water I give my calla lilies.

Everything I read indicates that calla lilies like rich soil and plenty of moisture. That contradicts what I have seen: in Portugal I saw wild calla lilies growing in dry places with poor soil — including right alongside railroad tracks. What is certain is that they do best with plenty of sunshine, six hours or more per day.

One of my favorite summer bulb plants is called a variety of common names: peacock orchid, sword lily or fragrant gladiolus (even though this plant is not an orchid, a lily or a gladiolus). That’s why I like Latin names. If you ask for Acidanthera murielae, plant-knowledgeable people around the world will know what you mean. But for now, I’ll refer to it as sword lily.

The sword lily has long, narrow leaves — like swords — that stand 18 inches or more tall. The blossoms are white with deep purple markings in the center of the six-petaled flower, along with a little yellow at the very center. You get two or three blossoms per stem, and they are enticingly fragrant, particularly in the evening.

Like the calla lily, sword lilies are tropical so we can grow them here, but they won’t overwinter outdoors. But the corms (bulbs) will survive in a 60-degree location all winter, and you can re-plant them next year. I have planted them in the ground, but favor them in pots because they are so fragrant, they are wonderful on the deck.

According to the directions, you can plant a dozen bulbs in a square foot of soil. So I planted a dozen in a 12-inch pot, each bulb 3 to 4 inches deep. You can plant them directly in the soil, of course, but I like starting them early for a mid-summer bloom instead of a fall bloom.

Other summer bulbs include gladiolous, crocosmia, ranunculus and best of all, elephant ear. Those are all delightful plants, each with its own requirements and benefits. All need plenty of su,n and to be brought inside before winter.

But in the space remaining, let me say that in Cameroon, West Africa where I spent nearly four years as a young man with the Peace Corps, elephant ear was a food staple. There it was called cocoyam, and it was the corm, or bulb, that was boiled, pounded and served as a main dish with a spicy sauce and perhaps a little meat.

Elephant ear leaves get huge — 3 feet long and half as wide. The leaves are also edible, and substituted for the nonexisting Tupperware container in Cameroon. Just wrap your lunch in a leaf, tie it up and go off to the fields. They produce no noticeable flower.

Because of my long association with elephant ear, I often grow it. It likes full sun and wet soil, or at least moist soil. I have grown it in the ground, but mostly grow it in a pot. I have had one all winter, indoors. I had cut it back in the fall, and thought it might stay dormant, but it has been growing in a west-facing window, though the leaves are very small now. You can order corms and plant them now. Each bulb can weigh a pound or more.

So if you are suffering from cabin fever, get some summer-blooming bulbs, a bag of potting soil, and get going. It’ll give you something to look forward to.

You may reach Henry Homeyer by e-mail at henry.homeyer@comcast.net. He is a UNH Master Gardener and the author of four gardening books.

Henry Homeyer’s website is www.Gardening-Guy.com. He is the author of four gardening books. You may reach him at henry.homeyer@comcast.net.

Henry Homeyer's website is www.Gardening-Guy.com. He is the author of four gardening books. You may reach him at henry.homeyer@comcast.net.