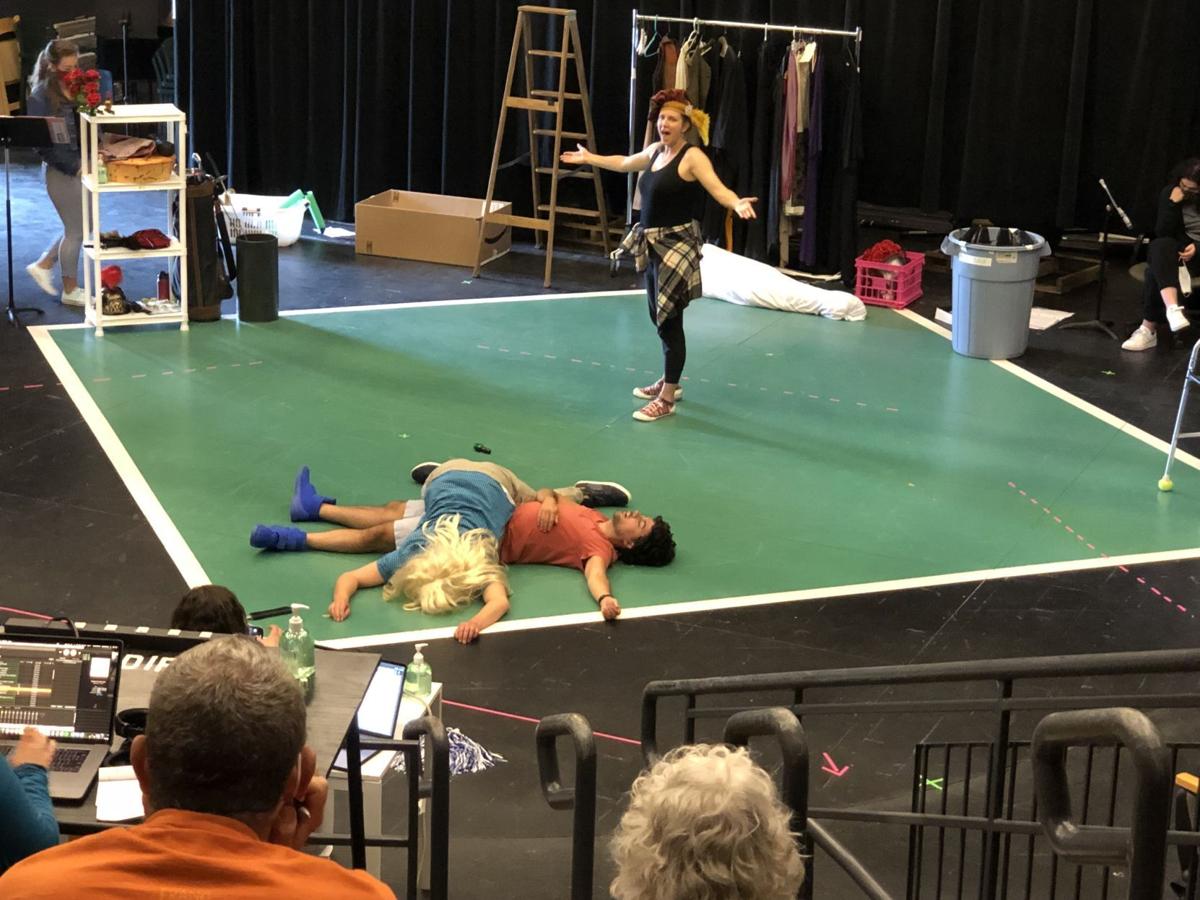 In rehearsal for Northern Stage’s “The Complete Works of William Shakespeare (Abridged)” are Jenni Putney (standing), Eric Love (blond wig) and Grayson DeJesus (black wig) working on a scene from “Romeo and Juliet.” Performances are June 9-July 4 at the new outdoor Courtyard Theater at the Barrette Center for the Arts in White River Junction.

In rehearsal for Northern Stage’s “The Complete Works of William Shakespeare (Abridged)” are Jenni Putney (standing), Eric Love (blond wig) and Grayson DeJesus (black wig) working on a scene from “Romeo and Juliet.” Performances are June 9-July 4 at the new outdoor Courtyard Theater at the Barrette Center for the Arts in White River Junction.

“The Complete Works of William Shakespeare (Abridged),” the 1987 parody by Adam Long, Daniel Singer and Jess Winfield, that presents 37 Shakespeare plays in 97 minutes, can be ridiculously funny — but only if it’s done with unusually deft comic skill.

“I think that I’m a big ham!” explains actor Eric Love, who is cast in the Northern Stage production, along with Jenni Putney and Grayson DeJesus. “I love big broad comedy and so a pitfall for me is overacting — which this script begs for. It sort of seduces you down the garden path. But what we found is that, if you put the breaks on and make it real, it’s funnier. That’s been wonderful — it was sort of going back to acting class.”

For Carol Dunne, who is directing, what makes this fast-paced comedy so successful is its “heart.”

“The guys who put it together LOVE Shakespeare — and loved it enough to want to celebrate it in a way that had heart and joy — and also I think made it so accessible to a wide audience,” she said. “It’s a Valentine, a total Valentine to Shakespeare.”

Northern Stage will open its first-ever summer season with “The Complete Works of William Shakespeare (Abridged)” June 9 through July 4 at its new outdoor Courtyard Theater behind the Barrette Center for the Arts in White River Junction. (Masks and social distancing are required.)

In “The Complete Works” three madcap actors in tights weave their wicked way through all of Shakespeare’s comedies, histories and tragedies in one wild ride. Once London’s longest running comedy, it will introduce audiences to Northern Stage’s brand new open-air stage.

What worked originally, Dunne said, were the three guys who created the show and their personalities.

“So we really wanted to find our way in so we weren’t just the same guys who did it before. That’s another trap with this show,” said Dunne, who has been Northern Stage’s producing artistic director since 2013.

Fortunately, with the performance rights come the permission to personalize the script.

“This was created with improvisation, so we, some time ago, decided Eric plays Eric Love and Jenni plays Jenni Putney, and that’s made a huge difference,” Dunne said. “I think you have to get to know the people who are struggling to tell a million stories in 90 minutes.

“I think without that, that’s where it can get into ‘fake-land’,” she said.

“When you put it in a fast and funny form, you actually walk away saying, ‘I want to see ‘Hamlet’! ‘Wow, I forgot how beautiful ‘Romeo and Juliet’ was!” Love said. “It definitely has the richness of the Bard in its veins.”

Love, now Northern Stage’s associate artistic director and education director, made his Vermont debut in “The Complete Works,” starring in the 2009 Lost Nation Theater production in Montpelier. And he still finds it difficult comedy.

“The challenge is specificity because if it’s not really, really specific, there’s a plateau of how funny it can get,” Love said. “Audiences laugh, but unless they’re deeply invested in the characters and the scenario, and the characters are so clean that they understand what is happening in a moment, it doesn’t work.

The other real challenge, despite lots of silly moments, is delivering the sophistication.

“How can we play this both for the highbrow jokes and the lowbrow jokes at the same time — and keep both those audiences happy?” Love said. “It’s a tightrope walk.”

Sometimes, working with Dunne, the circumstances are enough.

“You don’t have to do anything else,” Love said. “You just have to be right there, say the line. And other times you might create a wacky character or a little spice for the moment.

“It’s been a challenge. It’s not been just a waltz in the rose field,” he said with a laugh.

Is having done it previously a help?

“Yes and no,” Love said. “It helps that I have a little bit of sense of the script and some residual muscle memory, and I didn’t work as hard to memorize lines.

“However, Carol has a wonderful unique vision for the show, and so I’m having to undo some muscle memory. And I’m also 12 years older, so what was funny as a college kid running around is not the same as a ‘mature sophisticated’ actor.”

Love actually pressured Dunne, who was reluctant to take on this type of comedy, to direct. He felt that the comedy needed a director that could “get into the trenches” with the piece.

“And it’s been amazing to work with her,” Love said. “So it’s been a really cool adventure — but not easy.”

“Eric is doing some of his best work,” Dunne said. “His Juliet is to die for!”

Northern Stage presents “The Complete Works of William Shakespeare (Abridged),” by Adam Long, Daniel Singer and Jess Winfield, June 9-July 4, at the new Courtyard Theater at the Barrette Center for the Arts, 74 Gates St. in White River Junction. Performances are at 8 p.m. Tuesdays (beginning June 15) and Wednesdays; 4 and 8 p.m. Thursdays; 8 p.m. Fridays; 4 and 8 p.m. Saturdays; and 5 p.m. Sundays. Tickets are $45, $19 for students; call 802) 296-7000, or go online to northernstage.org