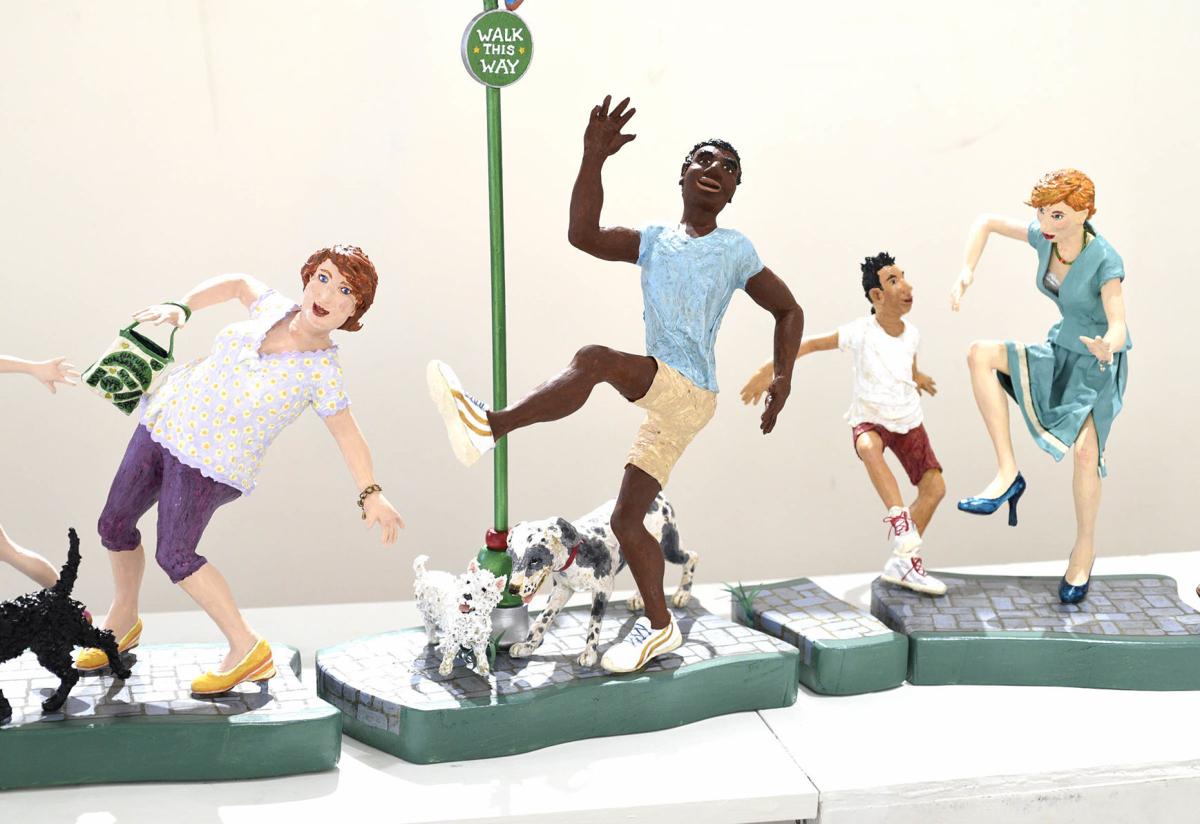 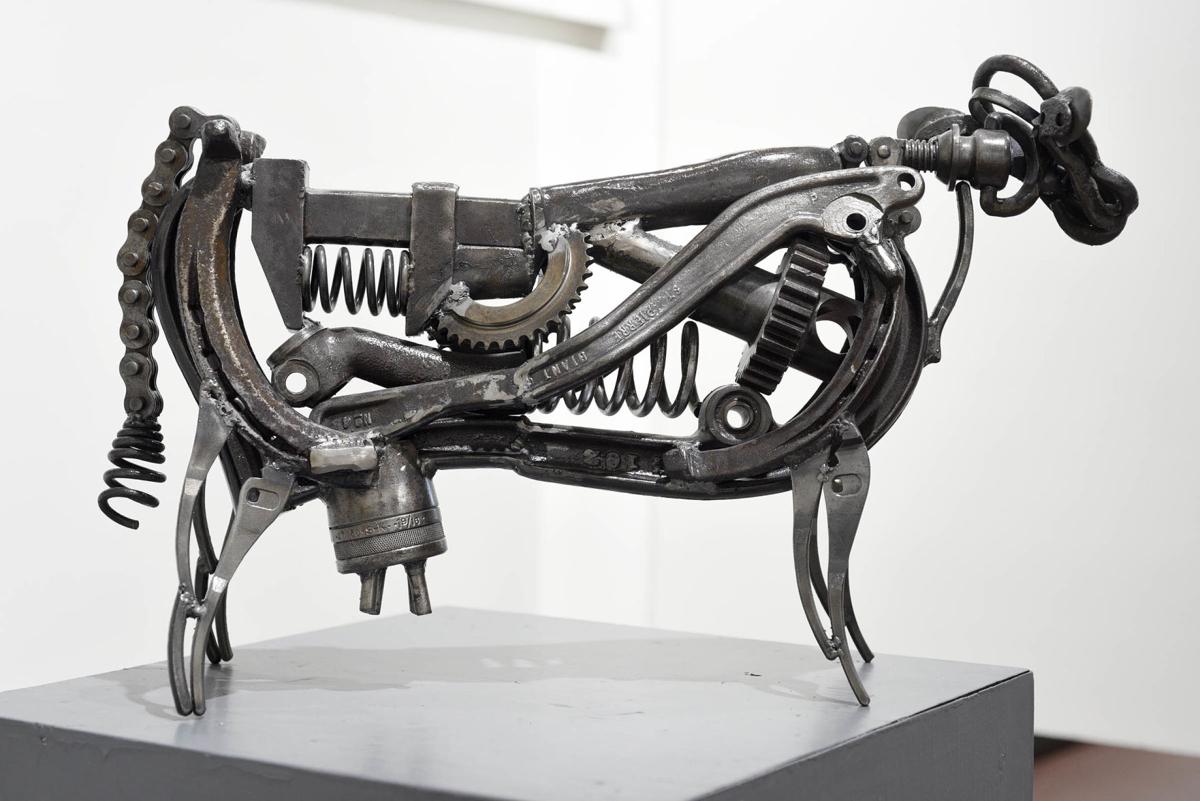 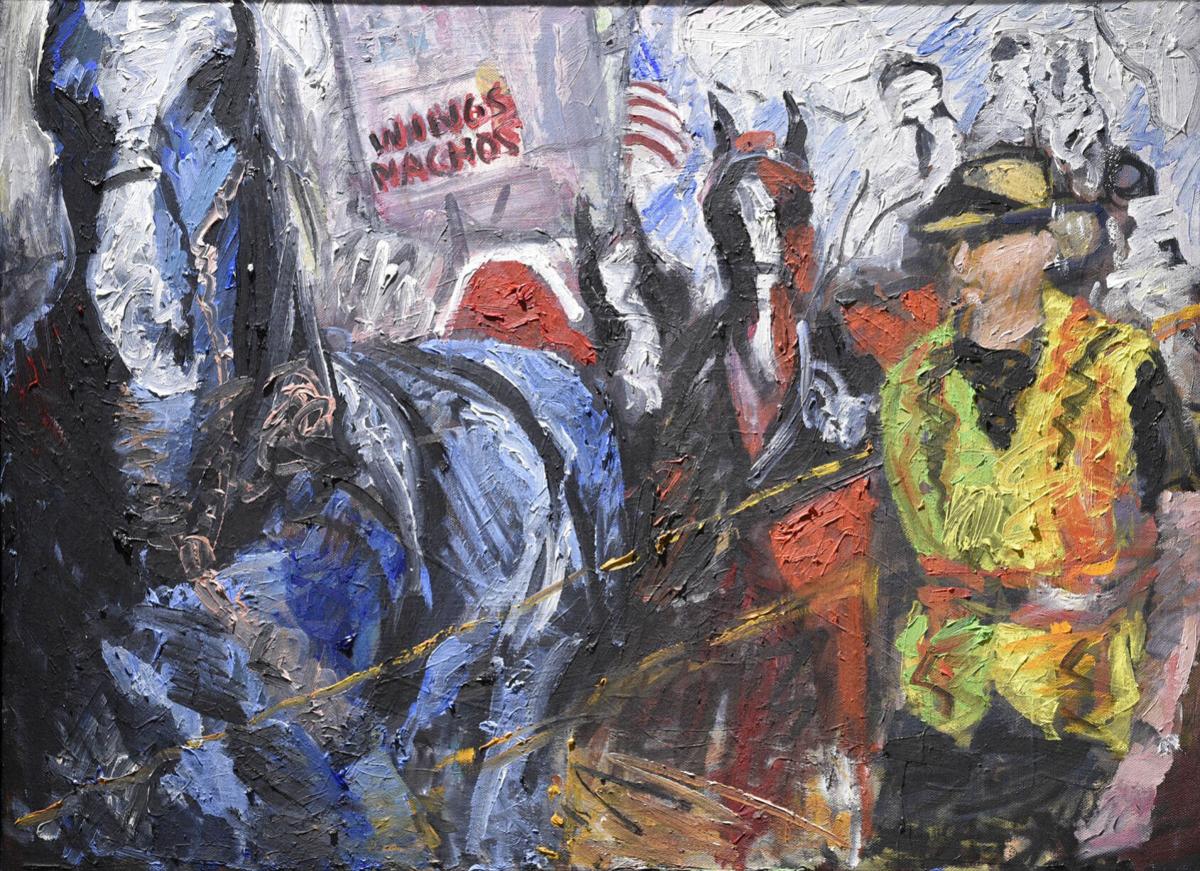 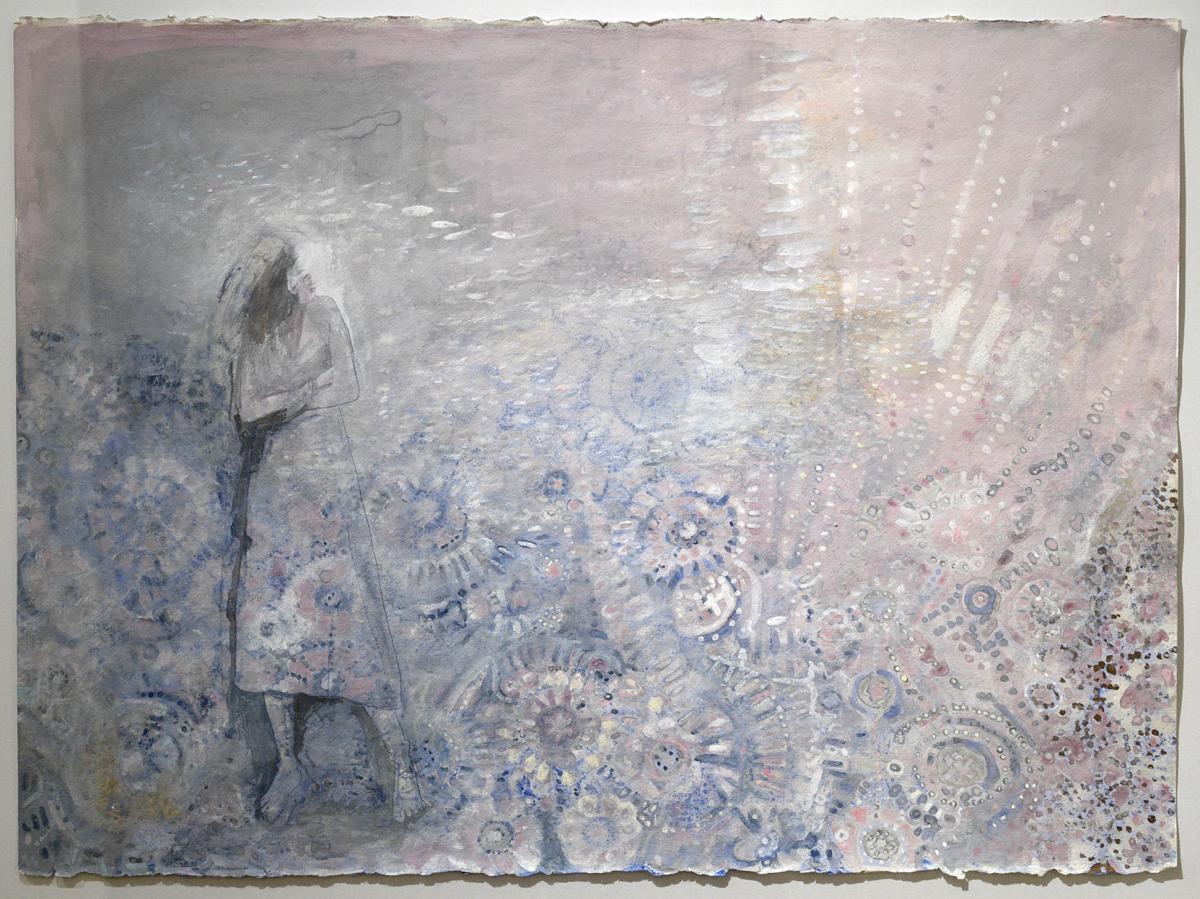 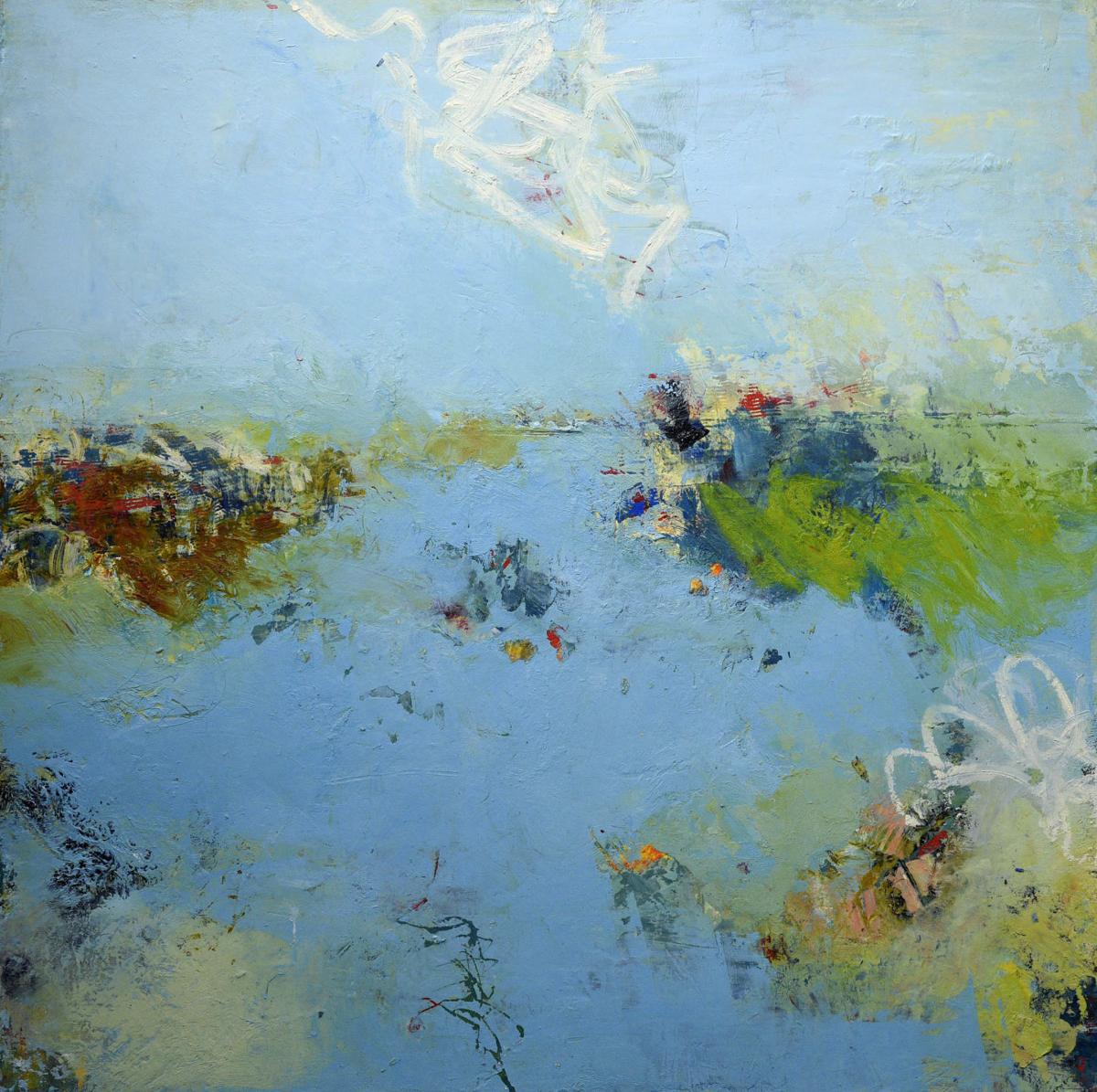 Kate Fetherston: “ You Are Here”

Kate Fetherston: “ You Are Here”

A drum major, jaunty green plume on his hat, holds the Stars and Stripes high in the window of Studio Place Arts. The plume — a duster at other times — crowns his upside-down silver pitcher chapeau as he sports Vermont license plate epaulettes on the shoulders of his metal barrel torso. In his regalia, he leads the parade.

Inside Studio Place Arts in Barre, the procession unfolds. Animals come first — giraffes, a seal, an ostrich — pulling a chariot. Next, a crowd of people and pets stroll, strut, and kick up their heels. Jugglers, a bounty of Beanies, marchers with messages and more floats and marchers wend their way through the gallery. There’s a bit of festive disarray toward the end — tigers escape a marooned circus wagon, trumpet playing hens blow their horns, a pair of 1950s majorettes cast sideways glances at the scene.

Barre did not have an Independence Day parade outdoors this year, but SPA has one in its gallery. “The Parade is Coming!” with paintings, sculptures, mixed media assemblages by 25 artists is on exhibit at SPA through Aug. 19.

In the upstairs galleries are three solo shows. “The Eternal Return,” with paintings and mixed media pieces by Michelle Lesnak, invites viewers to ponder mother-daughter relationships. Abstract paintings by Kate Fetherston in “Deconstructed Landscape” draw viewers to the feeling of Vermont — its light and lines rather than specific places. In the tiny Quick Change Gallery, “Metamorphoses: Drawings by Noam Hessler” features artwork by this local teen artist.

“Parades are an exciting convergence of people, political perspectives, music, animals, and community organizations, Sue Higby, SPA executive director, said. “We wanted to present a show like this because what better way is there to proclaim that we’re together again?”

Exuberant, colorful, lighthearted and occasionally thought provoking, “The Parade is Coming!” has a delightful summer vacation energy. There’s a lot to smile about — and even chuckle or laugh out loud — in considering individual pieces and discovering their details.

It has the spirit of Vermont’s community parades where diverse floats and marchers come together to celebrate, honor and entertain. Like other parades, this one appeals to all ages. Kids can explore it with an SPA scavenger hunt, finding items including a runaway tiger and vintage toys.

“Color Guard,” the drum major leading the parade, is by Aaron Scot Ingham of Bent Nails Studio in Marshfield. This mixed media piece sets the tone.

In “Walk This Way” by Kristin Schuyler, kids, adults and dogs frolic down a cobblestone street — State or Main as indicated by the sign. In colorful attire they high step, balance and perambulate in a variety of silly steps.

“‘Walk This Way’ is inspired by the musings of my brother Nicholas,” Schuyler says in a note to viewers. “We share a fond hope that its reality may be put into action somewhere in — where else but — Vermont … These days any reason to lighten up can only be to the good! Here’s hoping.”

A high-spirited crowd of dozens of little papier-mâché figures — most of them little blue dogs, Beanies — assemble in “Mr. Klein’s Improbable History (Beanie for Peace Parade)” by David Klein, of Marshfield.

Klein has developed the figure and character Beanie over several years. The singing dog has videos and recordings. The little blue figure is also an activist who speaks up for peace and causes including ending homelessness and clean water in Beanie dioramas.

A feminine quality pervades Michelle Lesnak’s “The Eternal Return” exhibition on the second floor as the artist considers mothers and daughters.

The title “refers to Nietzsche’s idea of this as felt through the heart of someone who is a daughter and a mother,” Lesnak explains in her artist’s statement. Lesnak notes that she wanted, “to paint about memories, imagined places, strange dreams and tangled emotions.”

In “bidding adieu” a woman in a flowing wedding-style gown and veil seems to move away from the viewer. In “between worlds” a woman stands in an arched doorway, arms crossed, gazing toward another open arch.

Kate Fetherston, in her artist’s statement for “Deconstructing Landscape,” explains, “For me, painting’s more about seeing than the seen. My work’s always drawn from the natural world — its lines, its organicity, its fleetingness. Like music, continually on the verge of the next note, the next rest, painting’s a relationship, a call and response.”

“These pieces reflect a variety of ways I think about the light, shadow, season connected with life in Vermont,” Fetherston says.