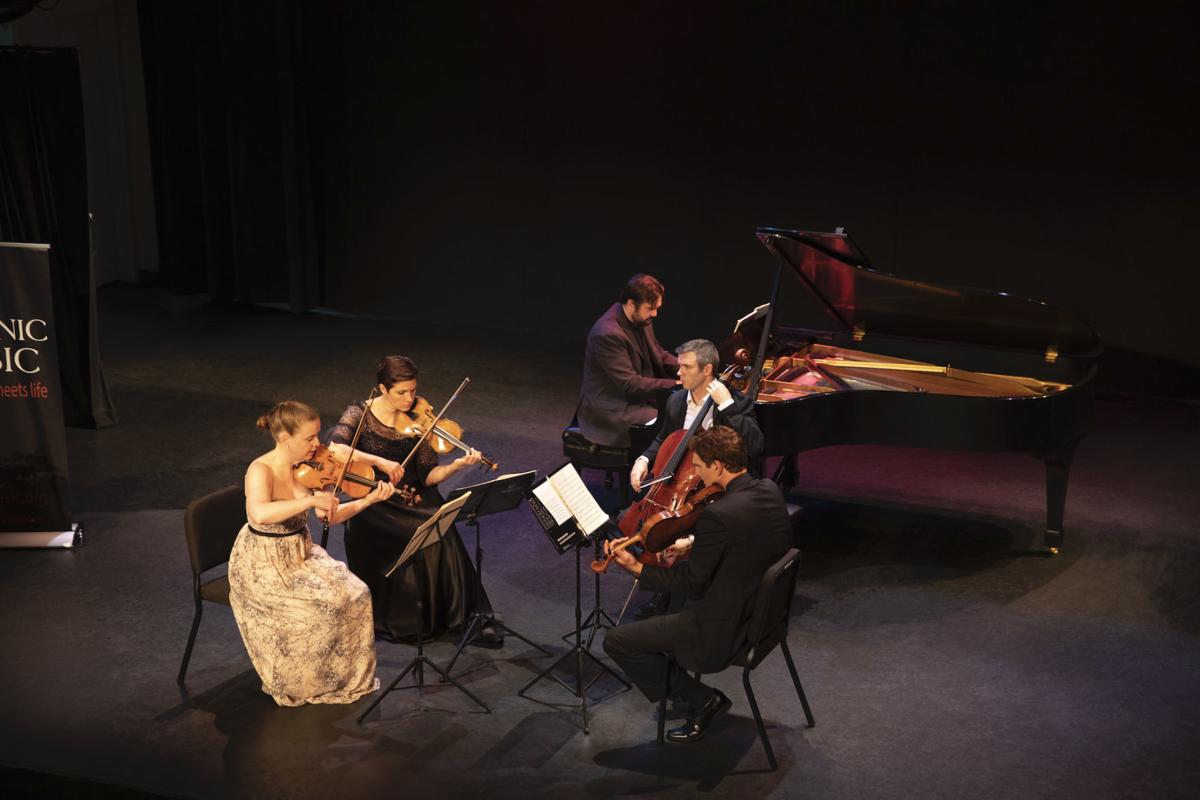 The Taconic Music Festival will present a series of four live in-person chamber music concerts Saturdays, July 11-Aug. 1, in Manchester. Pictured is one of last year’s performances at Burr and Burton Academy’s Riley Center for the Arts. 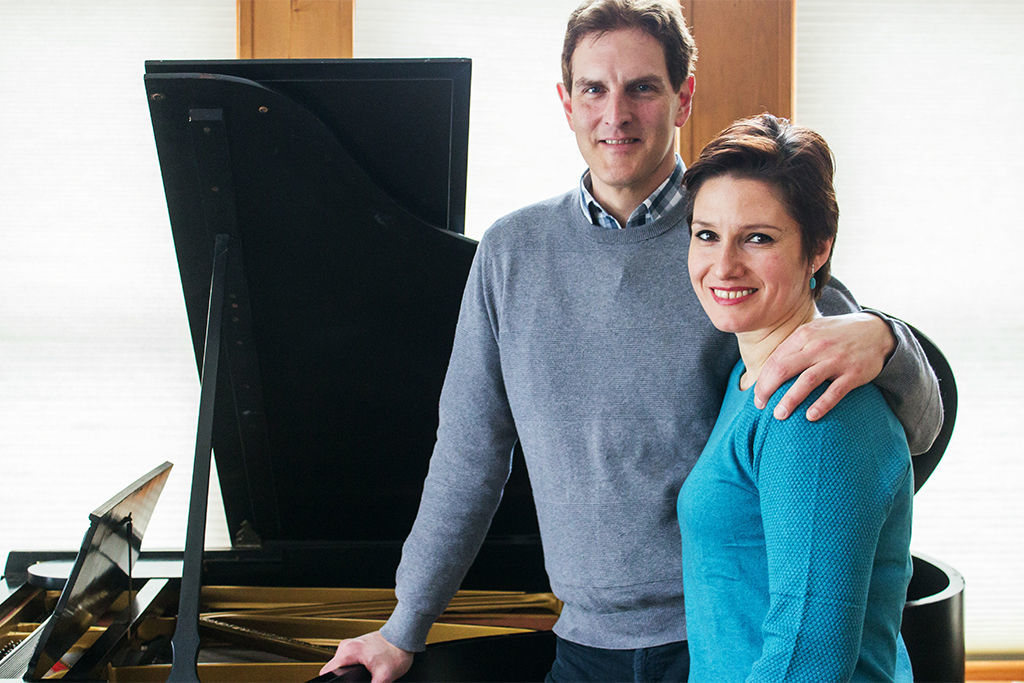 Violist and conductor Ariel Rudiakov and violinist Joana Genova, husband and wife, founded Taconic Music in 2016 as a community music program in Manchester. 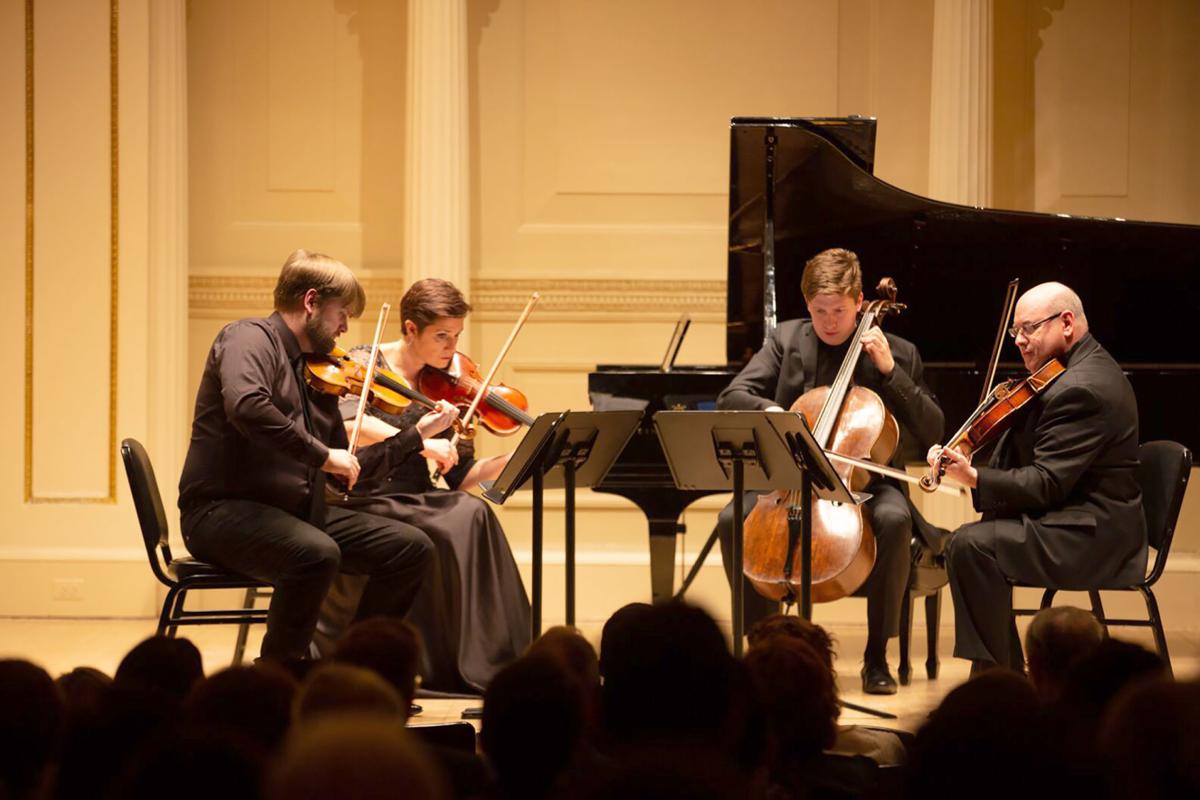 The Taconic Music Festival will present a series of four live in-person chamber music concerts Saturdays, July 11-Aug. 1, in Manchester. Pictured is one of last year’s performances at Burr and Burton Academy’s Riley Center for the Arts.

Violist and conductor Ariel Rudiakov and violinist Joana Genova, husband and wife, founded Taconic Music in 2016 as a community music program in Manchester.

Tonight, Vermont will enjoy its first indoor concert since the beginning of the COVID-19 pandemic. The Taconic Music Festival will begin its four-concert series of chamber music, “Celebrating Beethoven,” at Burr and Burton’s Riley Center for the Arts in Manchester.

“The piano was moved up onto the stage this morning, and we’re getting the hall ready with a Plexiglas barrier for the box office and shields, and this and that and the other, a cleaning protocol — and the whole nine yards,” Ariel Rudiakov, violist and Taconic Music co-artistic director, said Monday.

“We’re asking (all the musicians) to come here and get tested. Every step of the way, there’s potential for veering off the road, but we’re going to try.”

“The impetus for us was the desire to play live music with our colleagues the way it should be,” added Joana Genova, violinist, co-artistic director and Rudiakov’s wife. “At first, everybody didn’t mind having a little break from a crazy schedule of teaching, traveling, performing and then you realize how much you miss it.

“It’s very simple,” she said, “all of us miss playing chamber music together because we love the interaction on stage, the spontaneity of it, learning from each other and being together in Vermont.”

The concerts are at 7 p.m. Saturdays July 11, 18, 25 and Aug. 1. Each hour-long program will feature a Beethoven piece in honor of the composer’s 250th birthday, along with a complementary or contrasting work by composers ranging from Piazzolla to Mendelssohn, Schumann and Glinka.

“We have played together a number of times with him in Indianapolis and most recently at Weil Hall at Carnegie Hall,” Genova said of Pearson. “Drew had never been to Vermont. He’s an unbelievable pianist, just unbelievable. So we are excited to have the audience meet somebody new, as well as some familiar faces.”

On July 25, Genova takes the stage with The Indianapolis Quartet (Zachary DePue and Genova, violins; Michael Isaac Strauss, viola; and Austin Huntington, cello), which New York Concert Review praised as “a joy to behold,” and “any composer’s dream,” at its Carnegie Hall debut earlier this year. The program will open with Beethoven’s String Quartet No. 11 in F minor, Op. 95, “Serioso,” followed by Schumann’s Piano Quintet in E-flat Major, Op. 47, with Pearson.

Admission is free to all concerts, but reservations are required because of limited seating capacity (50). To accommodate those who may not be able to attend, the concerts will be live-streamed as well. State health guidelines are being closely followed, and all attendees are expected to wear an appropriate face covering to comply with Manchester’s mask ordinance.

Rudiakov and Genova founded Taconic Music in 2016. Having begun a family in Manchester, they left the summer-only Manchester Music Festival to create a year-round community music and education program. When COVID-19 shut down all of Vermont’s music festivals, Taconic had the advantage of flexibility, as it is small and Rudiakov and Genova live in Manchester. Some of the other participants also live in Vermont.

“Like everybody else we were part of this initial wave of shutdown,” Rudiakov said. “The whole situation was so fluid, and is changing so rapidly, so we decided to just wait.”

Then coronavirus regulations began to turn a corner.

“We tried to work through the logistics of having our whole festival as we would normally have it, and that proved to be absolutely impossible, so we did have to cancel our student component,” Rudiakov said.

As time went on, the “spigot” turned some more.

“What if we pushed back the dates a bit and just had some concerts, would that be possible?” Rudiakov asked. “Luckily, we had the blessing of Burr and Burton Academy, and this was at about the time the governor said you could have 25% capacity in restaurants, etc.”

Burr and Burton, Taconic’s longtime host and partner, has a stake in this experiment as well.

“They want to do this a little bit as a trial balloon as to how they reintegrate live in-school teaching in the fall,” Rudiakov said.

He and Genova decided to give it a try — while being flexible about it.

“So we pared down our musician roster,” Rudiakov said. “There are some pieces we won’t be doing this year to keep the concert schedule tight. We had hoped to do the Dohnanyi sextet with winds and piano, but we’re holding them off until next year.”

“People know how friendly we are and honest in our music making — and reaching out to the audience,” Genova said. “We responded to people we met on the street in April, literally asking (for our music). While we have these musicians in town, we’ll try to do some mini pop-up appearances at local places that need it. Everybody needs live music — musicians and audience alike.”

Although the current COVID-19 precaution guidelines currently allow 50%, Taconic is limiting attendance to 25%. When making reservations, information will be taken for contact tracing. Auditorium seats will be staggered 6 feet apart, arranged for about 50 people in the hall. Taconic has instituted a strict regimen of separation and cleansing.

“Every musician who is coming here has to isolate and quarantine before coming here and get tested when arriving,” Genova said. “The Manchester Medical Center will test all our musicians.”

Musicians are isolated in local housing. Almost all rehearsing has been on the stage, and masks are required for rehearsing and performing.

“Any musician who is uncomfortable with that can’t join us,” Rudiakov said. “Of course, we keep our fingers crossed that nobody coming from out of state will test positive.”

If Taconic Music is successful, other Vermont musical organizations will undoubtedly follow suit.

“We certainly hope so,” Genova said. “We would love to see more music come back to life. It’s not fair that there are airplanes flying full of people, Costco is full of people, but somehow concerts are not OK? Why is it not possible to have safe concerts?”

Taconic Music presents its live in-person summer concert series, “Celebrating Beethoven,” July 11-Aug. 1 at Burr and Burton Academy in Manchester. Performances are at 7 p.m. Saturdays July 11, 18, 25 and Aug. 1 in the Riley Center for the Arts, as well as live-streamed on the website. (Masks and other COVID-19) precautions are required. Admission (limited to 50) is free but reservations are required; go online to www.taconicmusic.org

The July 11th Taconic music concert was fantastic and being from out of state I very much appreciate that it was live streamed. Please note that the pianist's name is Drew Petersen, not Pearson as written in this article.