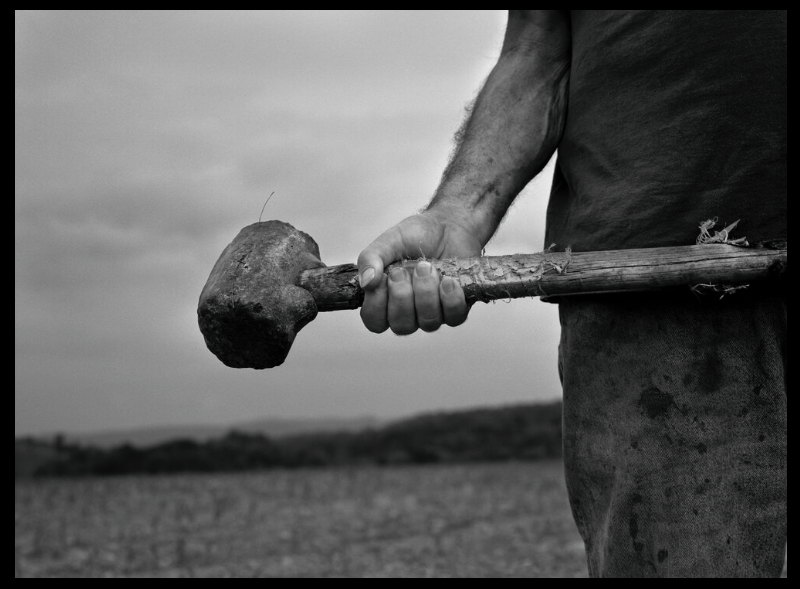 Playwright Allison Benko used this photo by Skye Chalmers as inspiration for “The Before,” her contribution to Weston Playhouse’s “Postcard Plays.” 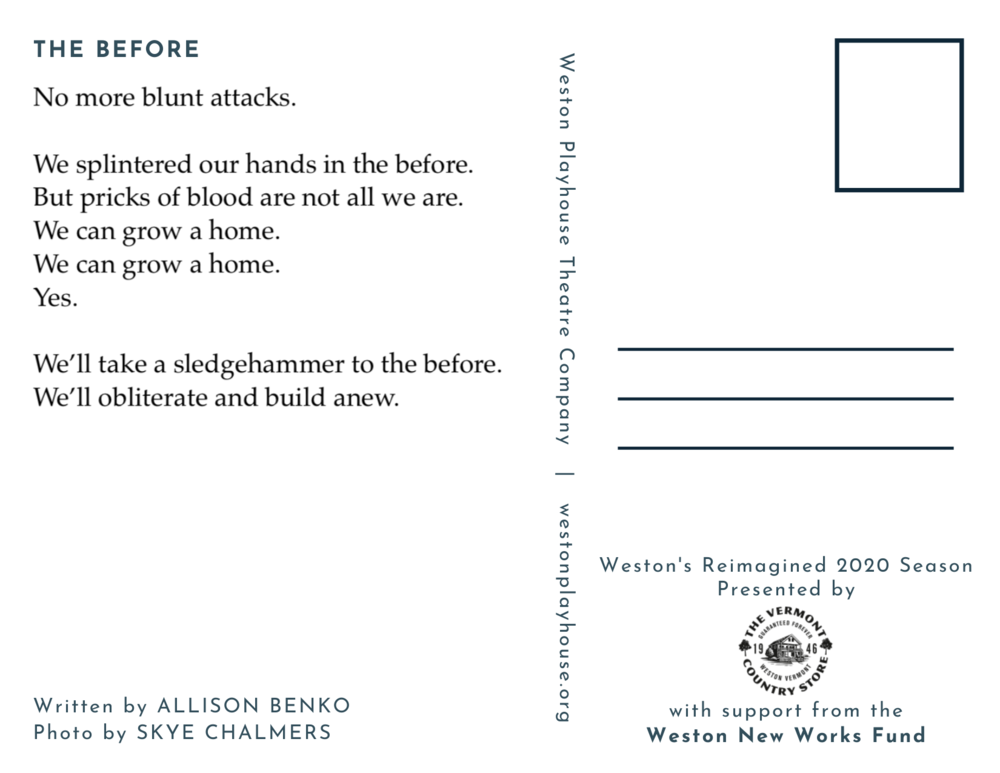 “The Before” by Allison Benko 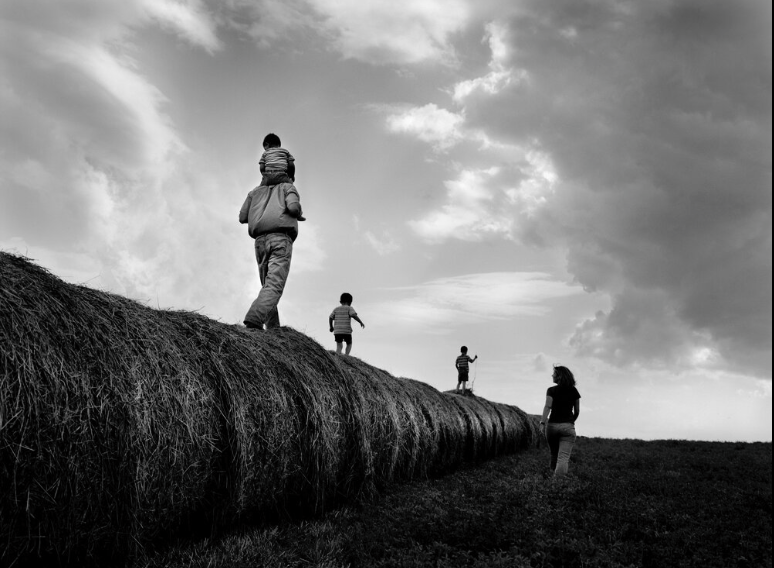 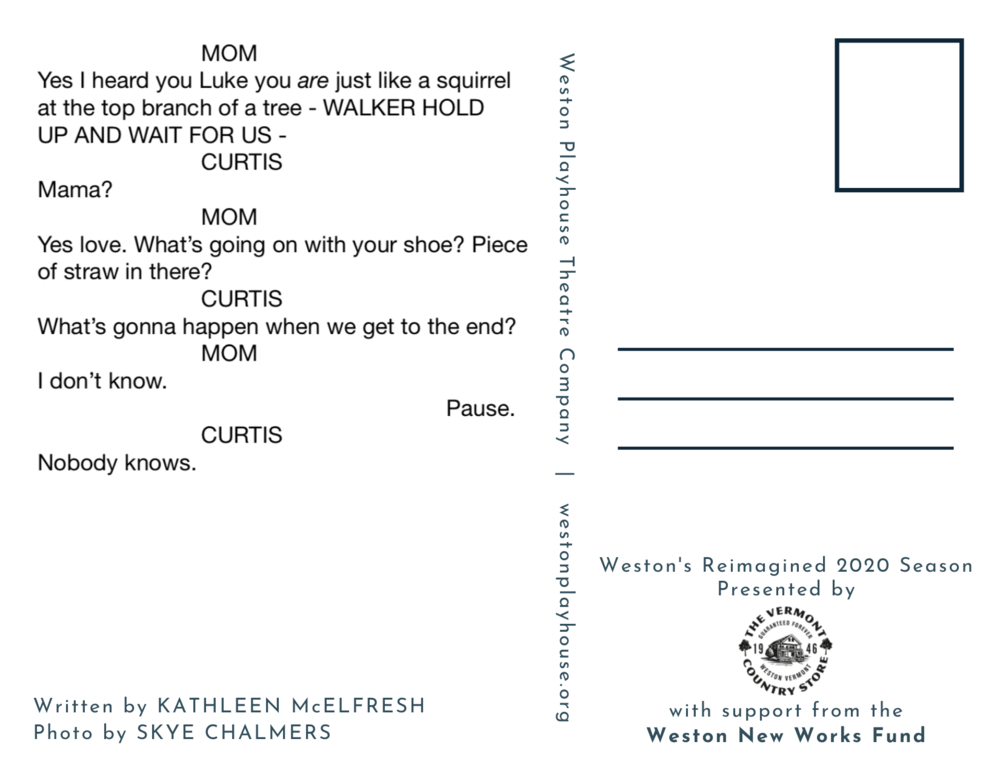 Playwright Allison Benko used this photo by Skye Chalmers as inspiration for “The Before,” her contribution to Weston Playhouse’s “Postcard Plays.”

“The Before” by Allison Benko

Weston Playhouse’s latest project combines a dash of nostalgia and a smattering of artists in one of its most unusual ventures to date. It pays homage as well to the theater’s roots, and may not have happened if not for the COVID-19 push for new solutions.

“Soon after we realized we had to cancel the season and think about what kind of work we could do given the situation, there were two things that went into it,” explained Susanna Gellert, Weston’s executive director. “One was that we were already early on in the days of being on our computers all day (with) Zoom and whatnot, so we were thinking how we could make art in a very not-digital way. The most analog thing we could think of was letters. Which became postcards.”

“Postcard Plays” is the final installment in Weston’s 2020 Reimagined Season. Ten Vermont-connected theater writers were commissioned to write a play to fit on the back of a postcard. The front contained images from Vermont photographer Skye Chalmers’ collection “Sending Milk.”

“It’s a super unique creative project,” Chalmers said by phone. His collection worked well for the project because of the nature of the photos, a sample of his approach to photography that he describes as intentionally ambiguous.

“Because it leaves more to the imagination,” Chalmers said, “and challenges people’s perspectives.”

But in this case the writers gave him a chance to see his own work with a twist. They were each sent a photo from “Sending Milk” and asked to write around it. Taken between 2008 and 2012, the photo collection looks at the dairy farms of New England, and specifically Cabot. The clean black-and-white images show peopled scenes on farms that encourage the viewer to pause and think.

“I was taken by how he captured these quintessential Vermont, New England images in ways that felt timeless, historical and also very modern,” Gellert said. “It felt right for this project that was combining old-fashioned and new.”

The photo that writer Allison Benko received depicts a close-up of an unidentifiable person holding a sledgehammer in the foreground, a vast expanse of land visible in the background.

“There was a lot of percolating for me,” Benko said about her process. “I had to sit with the photo for a couple of days and think about it in the back of my head before I could figure out what my angle was.”

“I did know that I had a very immediate sense of the photo being about relationships,” Benko added. “And some aspect of construction and how tools (both) build things and break things apart, and that being a very good metaphor for what we’re experiencing right now. What if destruction can lead to building something else?”

“Seeing the writers take on these images and what they saw or what they got out of the photos, it’s an aspect of photography I’ve never experienced,” Chalmers said. “It was a lot of fun and really interesting.”

It became a full-circle moment that might never have come about if not for the pandemic and the necessity of reinvention.