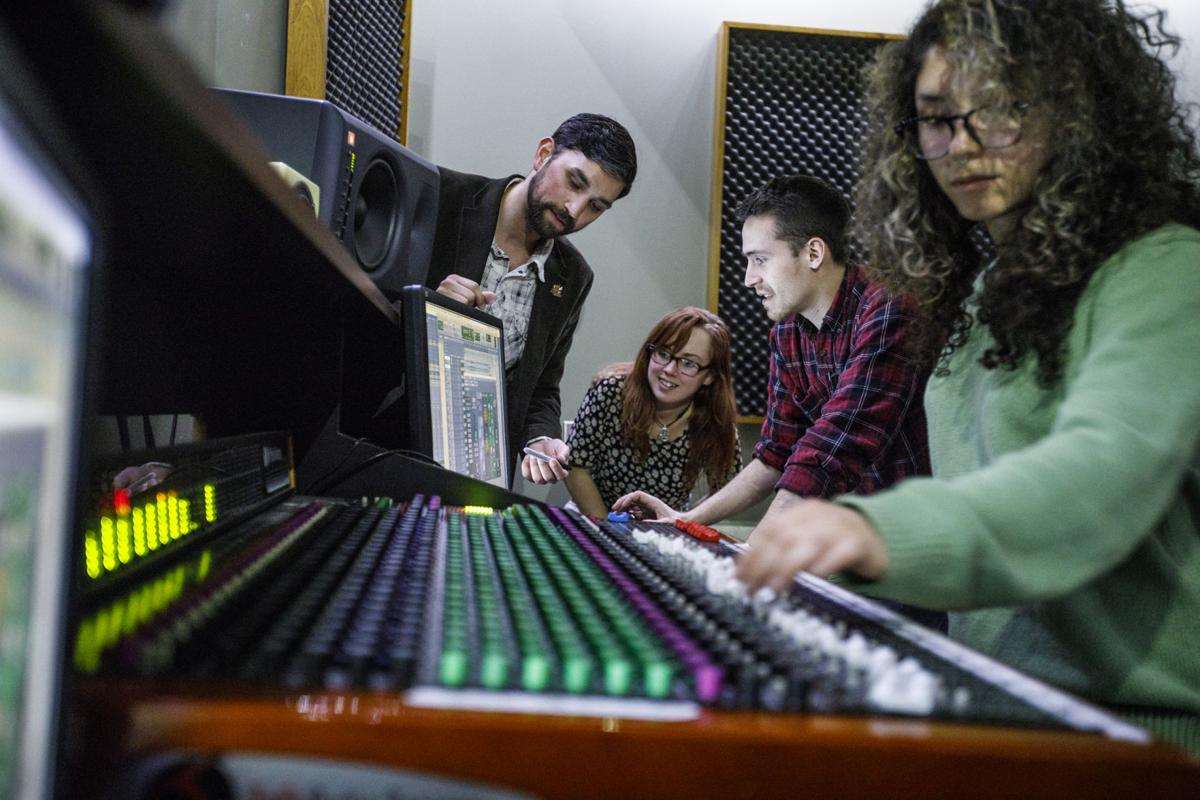 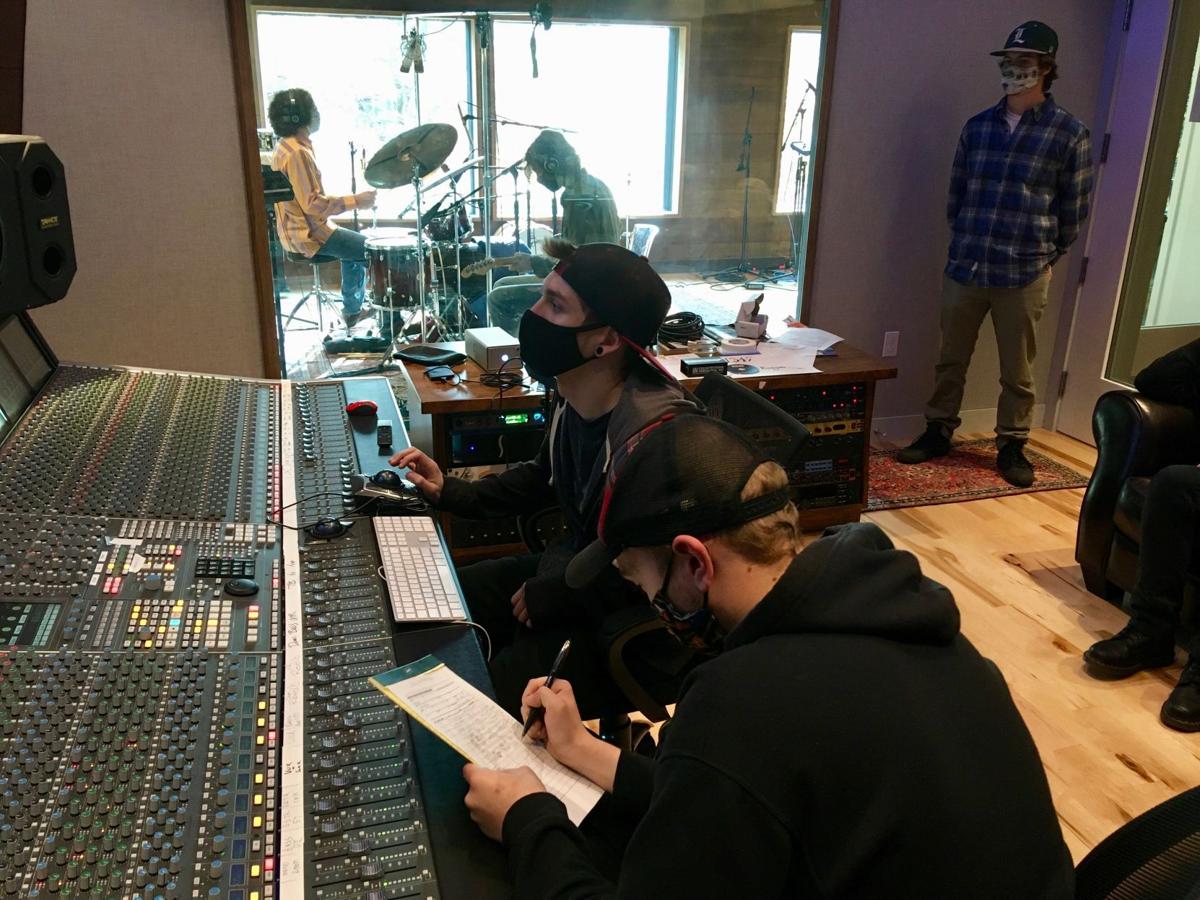 Students at a recording session work a mixing board at Northern Vermont University-Lyndon.

Students at a recording session work a mixing board at Northern Vermont University-Lyndon.

The three-song EP by the band Mad Mesa is quite good. The guitarist, bassist and drummer sound fully professional and the female vocalist has a strong voice. The production is impeccable. For Mad Mesa this EP is the initial step into the business of recording. For all the engineers, producers and others involved in the creation of this EP, it represents an invaluable learning experience.

The Mad Mesa EP is the creation of Eneekay Records, Northern Vermont University’s student-run record label. Based on the NVU-Lyndon campus, it is celebrating its fifth anniversary.

The record isn’t going to go platinum and sell a million copies or win a Grammy, but that’s not the point. The record label, which grew from NVU student desire to support Vermont talent, is run by the students who take the Record Label Practicum courses in the Music Business and Industry (MBI) degree program, perhaps the only degree program of its kind in Vermont.

NVU isn’t alone in offering a degree program that teaches music production, business and marketing. Berklee College of Music, Nashville State Community College and the University of Michigan at Ann Arbor have similar programs as do at least six other schools.

Throughout the college system schools are signing onto the realization that the music business is really big and there are many opportunities for trained professionals who learned their behind the mixing board skills at a college studio. The degree program is in keeping with the growing awareness in higher learning that schools need to provide courses that are in step with the times and of interest to potential students.

“In my curriculum, I was able to take classes on live sound engineering, performance, marketing in the industry and even post-production techniques,” explained Luke Modlinsky, a senior at NVU.

“NVU is focused on broadening students’ skillset so that they are able to find pockets of the industry that we are passionate about,” he added.

Modlinsky already has a position lined up for post-graduation. “I recently got hired as an audio-visual technician at Malloy Events, a company that specializes in corporate and political events in the greater Boston area.”

“People are hearing audio every day,” said Assistant Professor Brian Warwick, an instructor in the production course. Warwick, who once worked in Los Angeles as a recording engineer and won a Grammy for his skills, said NVU is, “training entertainment industry professionals. They will work for record labels, recording studios setting up sound systems for events. They may also work at audio-video set ups and festivals. This is an industry where the students will get a lot of reward.”

“There is a lot of entertainment being consumed,” Warwick said. That includes “streamed media that need music created by professionals.” The licensing of music is a moneymaker and, according to Warwick, “There are millions of professionals working in this industry.”

The Recording Industry Association of America (RIAA) statistics show the industry has been growing during the past five years with a 9.2% growth during the pandemic. According to Warwick, “Income varies in the industry, but is on par with other college graduates’ entry level work.”

Warwick said the NVU program is good for Vermont as a whole. “This is a way for the country and world to see Vermont. A way for us as music professionals to capture that sound and performance. We distribute it to everybody who couldn’t be there to hear that performance. We are in a way distributing the sound of Vermont.”

The Music Business and Industry Program at NVU is over 10 years old. Professor Beth Norris founded the program. According to Warwick there was a pushback then to remove music from the college. “She had the revolutionary idea to make it more business and technology oriented.”

Norris’ idea, changing the music program from conservatory and performance based, was a popular one. He said the program is “firmly rooted in music with business and technology entwined.”

There are on average 69 students in the program. “We tend to be the third most populous major at NVU at the Lyndon campus,” Warwick said.

More and more colleges are following the business, technology and music path. “It’s starting to become less unique,” Warwick said. “We are a program making this a success.”

Students can get certified on the industry standard Pro Tools software program that is the most popular recording software. NVU is one of three schools in New England to do this.

There are a number of success stories among former students now in the field. They are working at Universal Music Group in New York, Old Mill Road studio in East Arlington, Republic Records and The Warped Tour. Former students have gone on tour with the Drop Kick Murphys and James Taylor.

“They are doing really great,” Warwick said. “They are being challenged in an industry they have passion for.”

As for Eneekay Records, it continues the learning involved in recording for the past 5 years. Warwick said some of the performers recorded were not even students at NVU.

“We’ve done a hip-hop artist from New Hampshire and a Vermont waitress.” The record label’s goal, Warwick said, “is to support the music of the North Country by recording and marketing the album in all its many facets.

The culmination of the year’s classwork is the on-campus music festival Greggfest, which will be held May 1. This student-run festival has in the past chosen the bands, organized vendors, run the sound and the lights. This year because of COVID-19 restrictions the festival will be a one-day drive-in event limited to only Vermonters featuring only Vermont performers.

Warwick said Greggfest is “the highlight of the school year after 9 months of preparation.” The Mad Mesa EP will be released May 14.