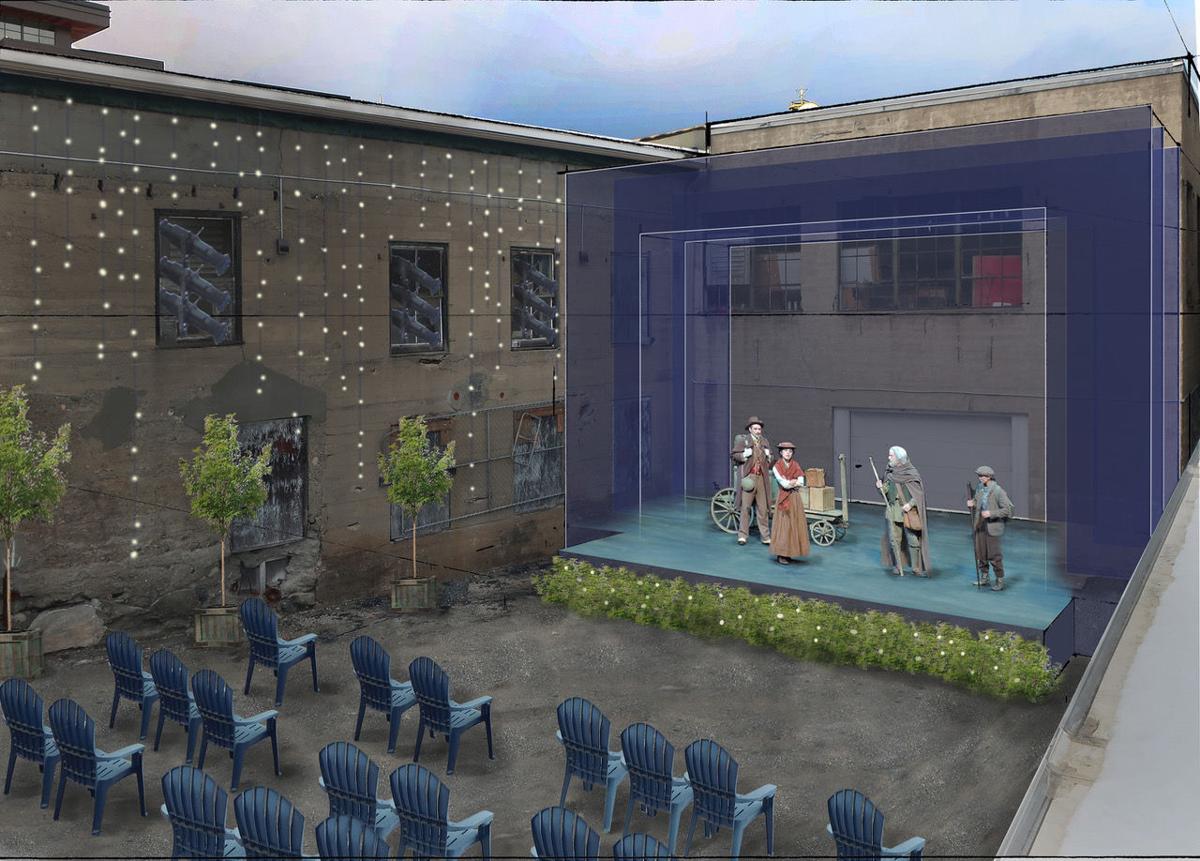 Northern Stage’s outdoor Courtyard Theater, designed by Michael Ganio, behind the Barrette Center for the Arts, will be the stage for this summer’s “The Complete Works Of William Shakespeare (Abridged)” and “Million Dollar Quartet,” as well as the Summer Shakespeare Intensive production of “A Midsummer Night’s Dream,” performed by 12-18 year olds. 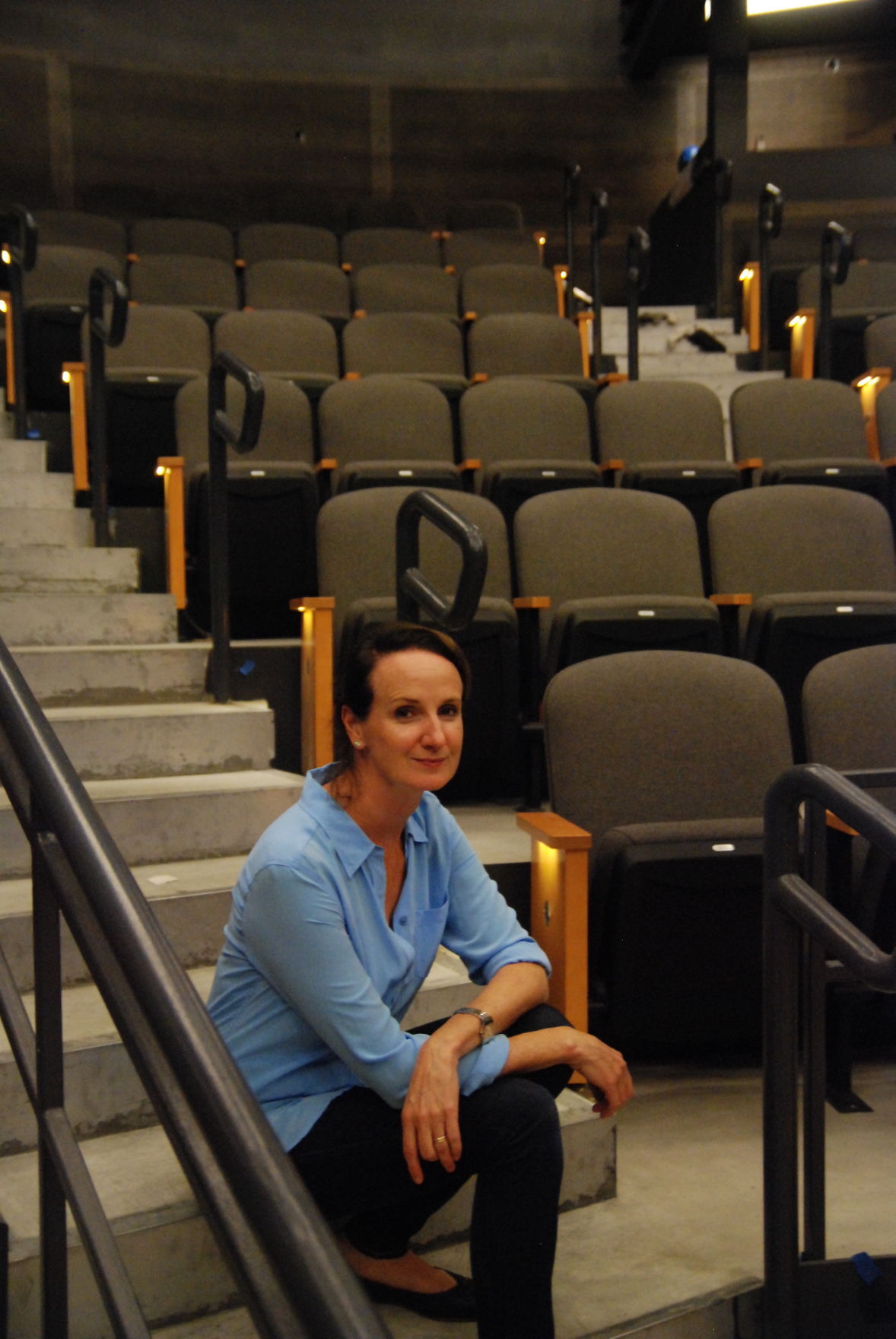 Carol Dunne, Northern Stage’s producing artistic director, in the Byrne Theater of the Barrette Center for the Arts. 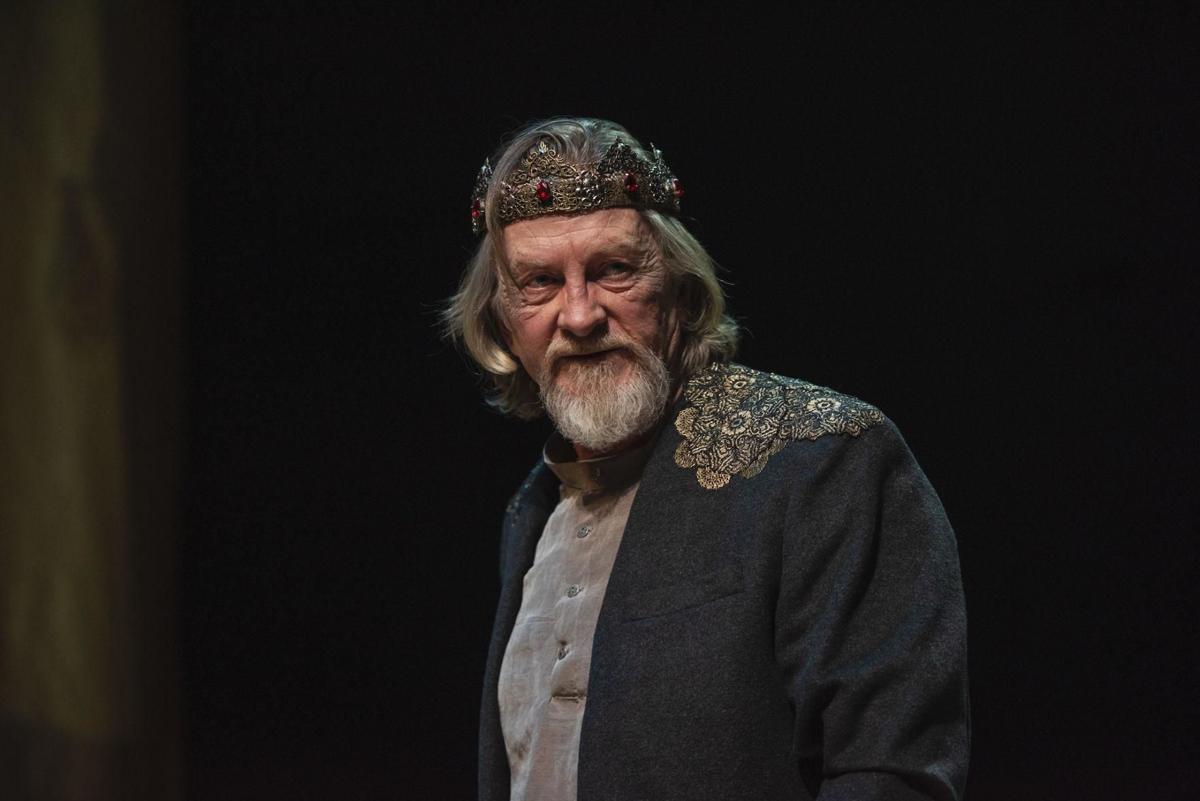 Jamie Horton was King Lear in Northern Stage’s production of the Shakespeare tragedy in January 2020. Horton will star in Simon Stephens’ “Heisenberg” Feb. 16-March 6, 2022 in the Byrne Theater. 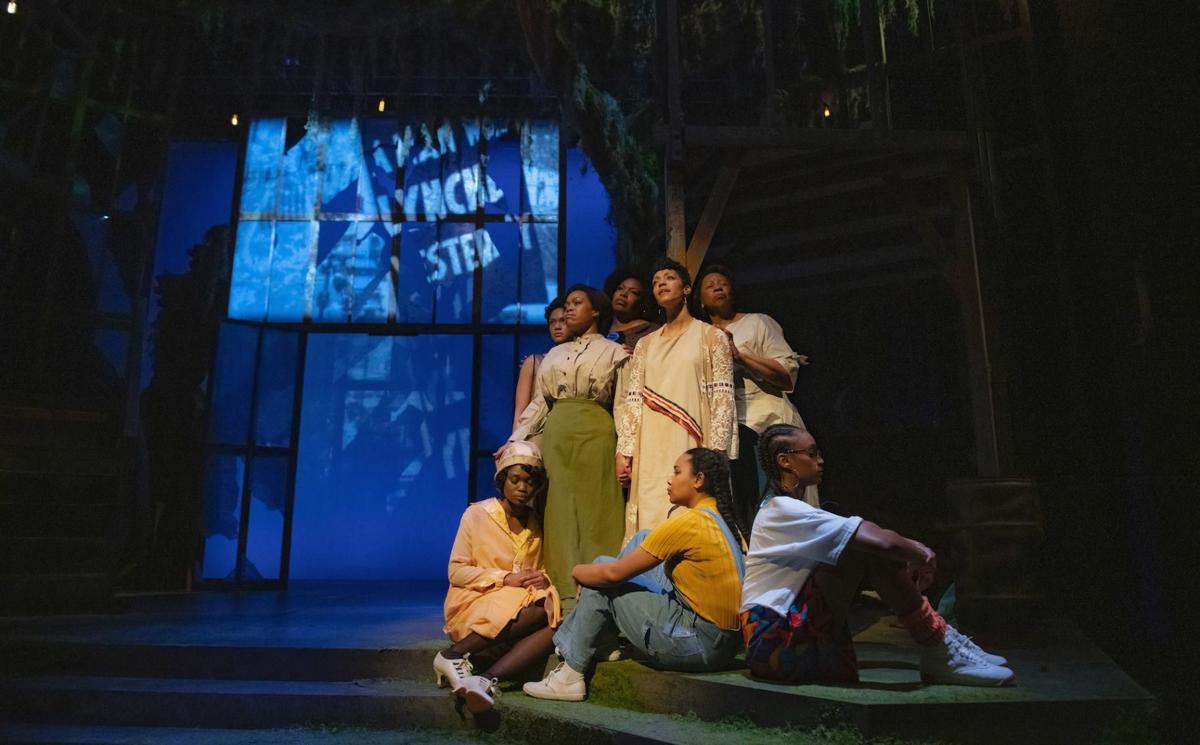 The COVID-19 pandemic shut down Northern Stage’s world-premiere production of Celeste Jennings’ “Citrus” in March 2020 at the Barrette Center for the Arts. The company will be workshopping Jennings’ new play “Enough” during the 2021-22 season.

Northern Stage’s outdoor Courtyard Theater, designed by Michael Ganio, behind the Barrette Center for the Arts, will be the stage for this summer’s “The Complete Works Of William Shakespeare (Abridged)” and “Million Dollar Quartet,” as well as the Summer Shakespeare Intensive production of “A Midsummer Night’s Dream,” performed by 12-18 year olds.

Carol Dunne, Northern Stage’s producing artistic director, in the Byrne Theater of the Barrette Center for the Arts.

Jamie Horton was King Lear in Northern Stage’s production of the Shakespeare tragedy in January 2020. Horton will star in Simon Stephens’ “Heisenberg” Feb. 16-March 6, 2022 in the Byrne Theater.

The COVID-19 pandemic shut down Northern Stage’s world-premiere production of Celeste Jennings’ “Citrus” in March 2020 at the Barrette Center for the Arts. The company will be workshopping Jennings’ new play “Enough” during the 2021-22 season.

“When we were first building the Barrette Center for the Arts, (then managing director) Eric Bunge and I walked out into the courtyard. I said, ‘Oh, my God, this would be great for summer Shakespeare.’ And we laughed and walked away,” said Carol Dunne, producing artistic director of Northern Stage.

In fact, the White River Junction Equity professional theater company will begin its 2021-22 season this summer in its new Courtyard Theater, and with Shakespeare — sort of.

Northern Stage’s new season features “fractured” Shakespeare and a bit of rock ’n’ roll history during the summer in the new Courtyard Theater, while Spring ’22 will be indoors at the Barrette Center’s Byrne Theater, an intimate drama and a riotous and legendary comedy. In between will be some delightful surprises — that haven’t been announced yet.

Opening the Courtyard Theater will be the irreverent romp, “The Complete Works Of William Shakespeare (Abridged),” June 9-July 4. Written by Adam Long, Daniel Singer and Jess Winfield, and directed by Dunne, the fast-paced farce will feature 37 Shakespeare plays in 97 minutes — outdoors.

“It’s something I’ve always wanted to do,” Dunne said. “And we’re casting it a little differently — it’s not three men anymore.”

Northern Stage will using an updated version by the creators, who gave the company license to be very cognitive of the now.

“We’re going to set it as three actors desperate to do a live play,” Dunne said. “So they’re going to be showing up almost as if they’re getting out of their cars to go on stage at this new place that we’ve created.”

“It will be very COVID-aware in its presentation,” Dunne added. “The audience is going to be distanced and limited in number.”

The outdoor main stage season concludes with the roof-raising musical “Million-Dollar Quartet,” Aug. 11-Sept. 12. The fact-based rock ’n’ roll songfest goes back in time to Dec. 4, 1956, when icons Elvis Presley, Johnny Cash, Jerry Lee Lewis and Carl Perkins gathered for the first and only time at Sun Records in Memphis for what would be one of the greatest jam sessions ever. That legendary night will come to life with a score of hits including “Blue Suede Shoes,” “Great Balls of Fire,” “Walk the Line,” “Folsom Prison Blues” and “Hound Dog.”

“That was supposed to finish the 2019-20 season,” Dunne said. “And doing it outside we think is just dreamy. It’ll be like a rock ’n’ roll concert with heart.

“What I love about it is that it’s all about the creative force and creative genius,” she said. “This group invented rock ’n’ roll music as we know it. That to me is exciting and thrilling.”

“That’s fabulous,” Dunne said. “So those real lovers of that era and that music hopefully will go to both.”

English playwright Simon Stephens’ “Heisenberg,” Feb. 16-March 6, 2022, will bring the audience back into the Byrne Theater.

“This isn’t like a season, it’s an emergence,” Dunne said. “This will be the first full indoor production we’re doing and we wanted it to be something about human connection.”

In this pas de deux play, an electric encounter between two strangers in a train station grows, through six scenes, into a complex and life-changing relationship. Starring Jamie Horton (“King Lear”), the quietly powerful drama lays bare the beauty in the natural unpredictability of human connection.

“It’s an older man and a younger woman,” Dunne said. “We are very committed to diversity in our casting. We were looking for plays of joy that bring diverse artists together and, with this play, in particular, it’s just about the beauty of human connection.”

“It’s also very much about an older man who thinks there isn’t room in his life for love anywhere,” Dunne said. “It’s beautiful.”

Closing the season will be “Monty Python’s Spamalot” April 13-May 15, 2022 in the Byrne Theater. With book and lyrics by Eric Idle and music by John Du Prez and Idle, “Spamalot” is lovingly spun off from the classic film comedy “Monty Python and the Holy Grail.” The outrageous story follows King Arthur and the Lady of the Lake as they search for the Holy Grail and “always look on the bright side of life.”

“‘Spamalot’ is just to laugh,” Dunne said. “Again, we just need to have fun. I’ve directed it before, and I think it’s one of the best first acts. It’s just a ride of joy.

“And you do not need to be a Monty Python person,” she said.

As usual, Northern Stage won’t be idle this fall — but those plans have yet to be announced.

“We all come from that theater model where we want to do new plays and reinvent classics,” Dunne said. “We really love a breadth of programming.”

Planned are workshop productions of two new pieces most recently featured in this year’s New Works Now Festival. With music and lyrics by Zoe Sarnak and a book by Alexis Scheer, “Shook” marks Northern Stage’s first-ever commissioned musical work. The story of high school thespians that have been preparing for the highly anticipated National Shakespeare Competition, “Shook” takes the audience on a roller-coaster ride through song and sonnet, foes turned friends, and kingdoms lost and won.

“We will hopefully be bringing our new musical to life over the next two seasons,” Dunne said, “as well as the commission with Celeste Jennings.”

“Enough,” by Jennings (“Citrus”), focuses on a family discovering beauty and strength in things not remembered as they realize that some things are meant to be forgotten.

COVID-19 safety led to the creation of the Courtyard Theater. Designed by scenic designer Michael Ganio, it will hold an audience of up to 250 people, but will initially seat 120 for the approaching summer in order to adhere to pandemic safety precautions.

“Imagine the delight to discover in the softening twilight a hidden theater at the end of an abandoned alley,” Ganio said. “Hidden from view by old buildings of rough concrete and gravel, the elegant performance space seems to whisper, ‘Something is about to happen’.”

In addition to the two main stage productions, the Courtyard Theater will host this season’s Summer Shakespeare Intensive, a professional-level theater training program for students ages 12-18 and a cornerstone of Northern Stage’s Education Department.

Throughout the course of five weeks, some 25 students will rehearse and perform Shakespeare’s “A Midsummer Night’s Dream” in July in the Courtyard Theater. Visit northernstage.org/summer-shakespeare-intensive to find audition information.

“As we emerge from COVID-19, we are putting audience safety first, which is why we are introducing this exciting new hybrid season,” Dunne said.

Northern Stage announces its 2021-22 season (to date) at the Barrette Center for the Arts in White River Junction: