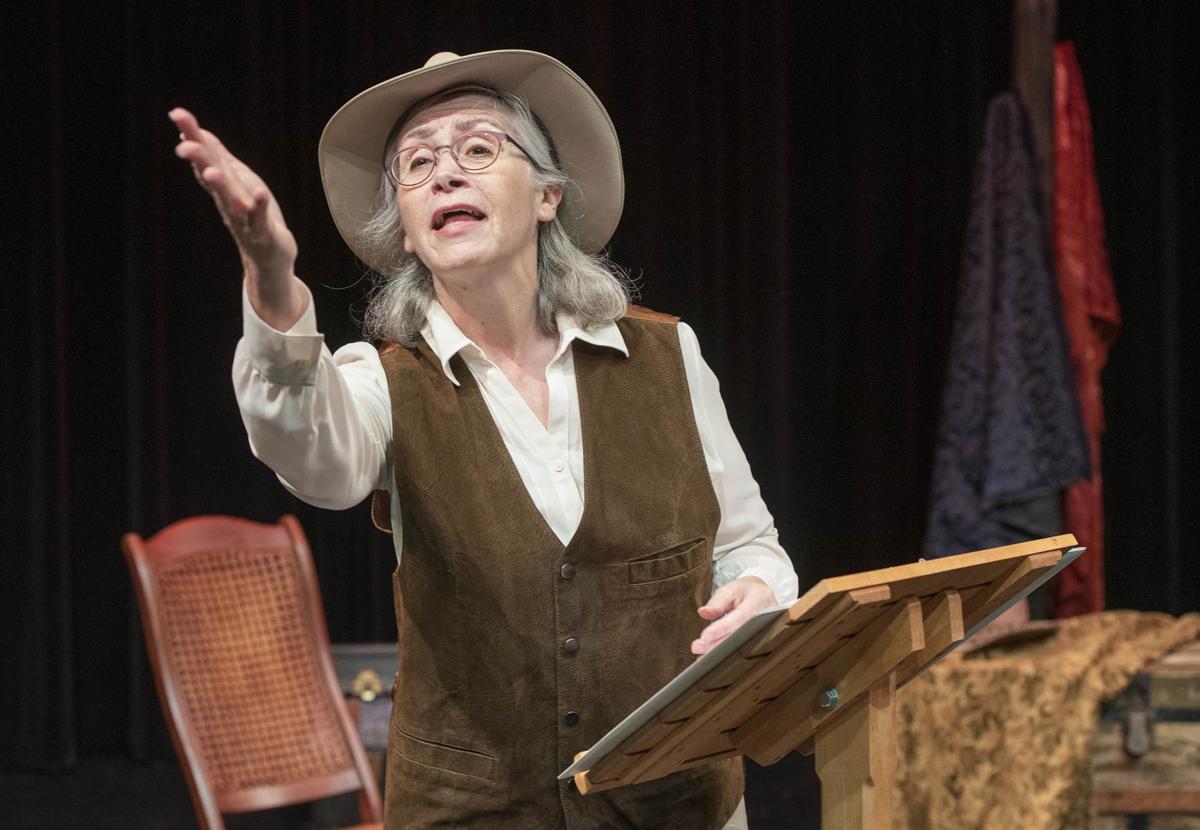 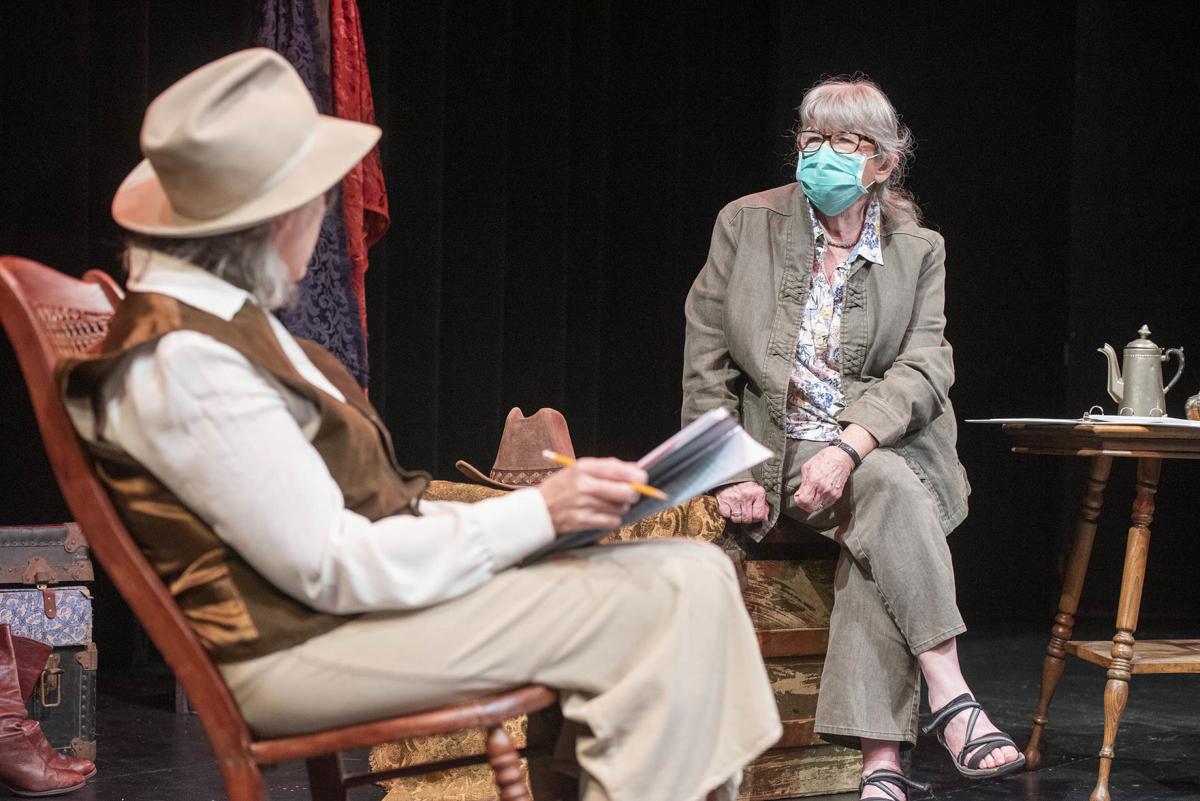 Hot shot sharpshooter Annie Oakley could blast a cigar from a man’s mouth, hit each one of a handful of pennies flung into the air, and pierce a bullseye behind her back. Star of Buffalo Bill’s Wild West Show, markswoman par excellence, and consummate performer, Annie Oakley was on target with firearms and audiences. Acclaimed for her shooting from her teens in the 1870s, she was still setting new records 50 years later.

Feisty, hardworking, and with a reputation that William Randolph Hearst couldn’t tarnish — though he tried — Annie Oakley remains an engaging character today, nearly a century after her death.

Next weekend Little Sure Shot will be at Montpelier’s Lost Nation Theater with Maura O’Brien performing a staged reading of “Annie Oakley,” a new play in progress by Roxbury playwright Jeanne Beckwith. The staged reading, with some elements of costume and design, will be performed live in the theater, with Sunday’s performance live streamed and a recording remaining available online through the following week.

“Annie Oakley” was written by Beckwith for Lost Nation, specifically with an eye to the title character being performed by O’Brien. The finished play, fully staged and costumed, will be presented in the theater’s 2022 main stage season.

“She was not what I thought she was at all. The more I found out the more amazed I was. I have just become obsessed with this woman,” Beckwith said about her journey of researching Oakley and writing the play.

“She really was as good as everyone said she was. She was an incredible marksperson and an incredible woman,” Beckwith said. “I’m hoping that what I’m coming up with does her justice.”

Beckwith’s research has included biographies, correspondence penned by Oakley and family, even to a very early moving picture — an 1894 Edison Kinetoscope snippet shows her shooting an array of glass balls. A mega-celebrity in her time, Oakley was widely covered in the press.

Along the way, Oakley’s story has some inconsistencies and apocryphal tidbits. Beckwith has a little fun with some of these.

Oakley was born in 1860 in Ohio, to a large family of few financial means. At 8 years old, perhaps earlier, she was hunting and shooting — later telling of her accuracy in offing her first squirrel. Her family’s poverty led her to time in the poor farm after her father’s death and other hardships.

In her teens, back home, she put her firearms talents to work, selling deer and other game that she shot to local stores. Her stunning skill became known.

A marksman with a travelling show came to Cincinnati, perhaps in 1875 when she was only 15. Part of Frank Butler’s exhibition promotion was a $100 bet that he could beat the best local talent in a shooting match. Oakley was not the competition he expected.

Their marriage lasted to their deaths less than a month apart in 1926.

Oakley and Butler performed for many years with Buffalo Bill’s Wild West Show — Oakley with top billing — including European tours and performances for royalty and heads of state, Queen Victoria among them. After the sun set on the Wild West Show, she performed with other shows and exhibitions. During World War I she offered to teach marksmanship to troops including women, although her offer wasn’t accepted.

“Annie Oakley was an advocate for women in surprising ways. She did not campaign for the right to vote, but advocated for equal pay. She wanted women to be in the military. She wanted women not to be their husband’s property. She thought every woman should know how to shoot,” Beckwith said.

In Beckwith’s research, she learned of a conversation late in Oakley’s life with actor, columnist and social commentator Will Rogers. That meeting, which deeply touched Rogers, provides the play’s setting.

This play came about through Lost Nation’s long relationships with both Beckwith and O’Brien.

Last fall, as Kim Bent, founding artistic director, and Kathleen Keenan, producing artistic director, were looking ahead to 2021 and trying to fathom theater with the uncertainties of COVID-19, they were considering possibilities for one or two person plays as small casts would be safer for distancing and in-person rehearsals.

“As a solo performer, Maura has such a wonderful ability to relate to the audience,” Bent said. “Take down the fourth wall and that’s where she likes to live. She has that ability to spontaneously react to what happens with an audience in a live performance.”

Keenan also noted that O’Brien, like Oakley, has extraordinary tenacity. O’Brien broke her wrist hours before going on stage as Dr. Ruth. Never considering that the show would not go on, she was adapting her part and movements for the evening’s performance as her doctors were setting and splinting the arm. Oakley, as audiences will hear, persevered, rebounding from train and automobile accidents to continue performing almost to the end of her life.

When they approached Beckwith to see whether she had anything in the works that might be a good fit, she offered to write a new play. Now, after months of research and writing including revisions from a small private reading, “Annie Oakley” moves to its next stage of development. With this staged reading, audiences are invited to join in post-show conversations and to offer their feedback and responses.

Lost Nation Theater presents staged readings of “Annie Oakley,” a work-in-progress by Jeanne Beckwith, performed by Maura O’Brien, in person, at City Hall Arts Center, 39 Main St. in Montpelier, at 7 p.m. Saturday, Oct. 2, and 2 p.m. Sunday, Oct. 3, 2 p.m. The reading will be live-streamed and remain online Oct. 3-11. Admission is “pay what you can,” masks and proof of vaccination, required. For more information, go online to www.lostnationtheater.org