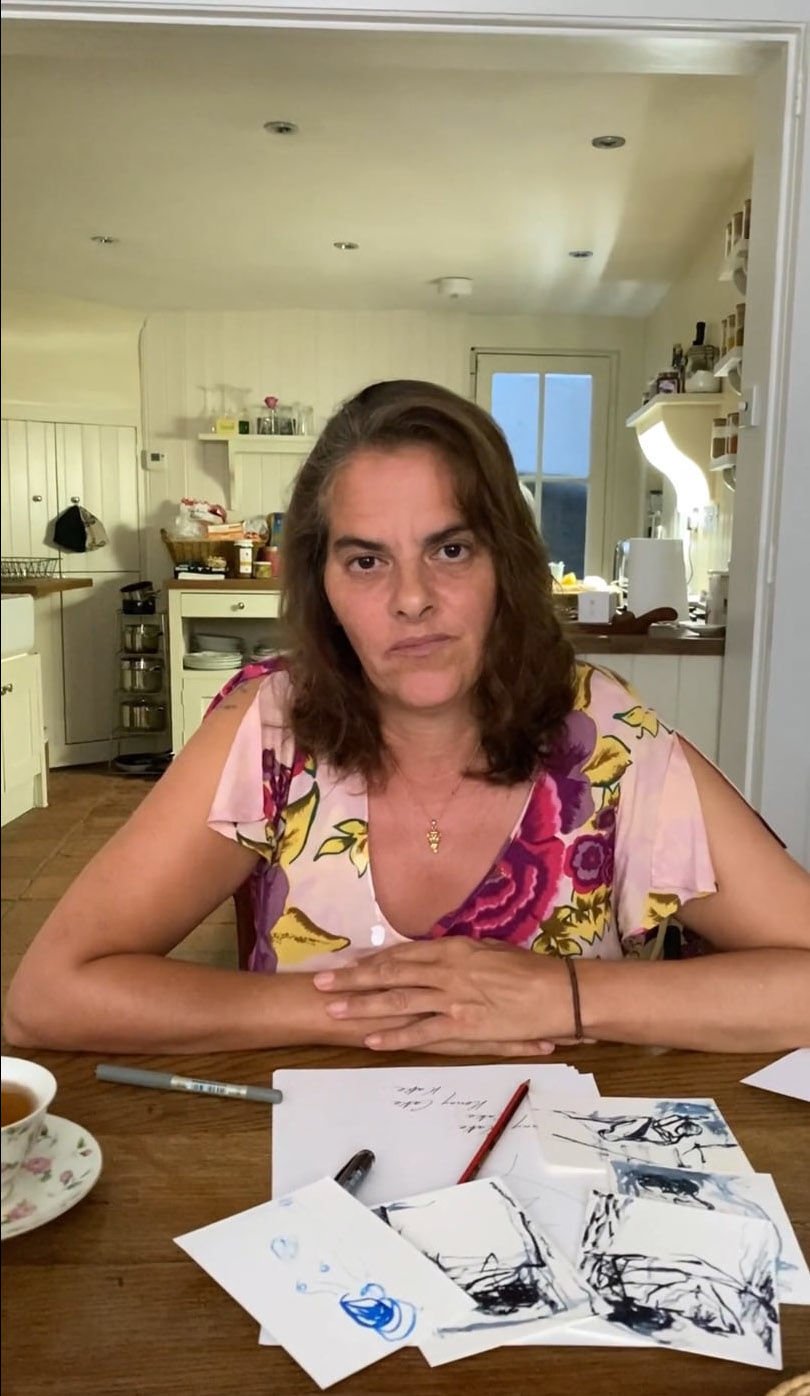 “It’s been lovely going to sleep with my paintings ... Everything I want in the whole world is my work.” — English artist Tracey Emin. 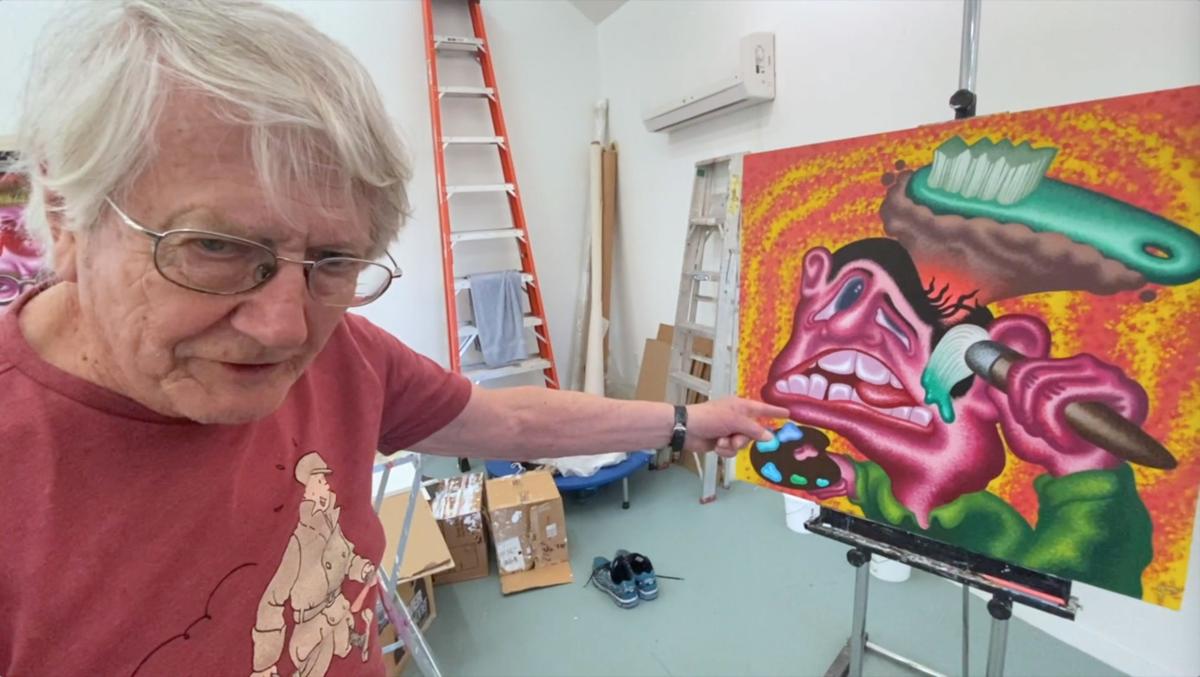 “I try to put myself to one side and deal with the picture itself.” — Peter Saul. 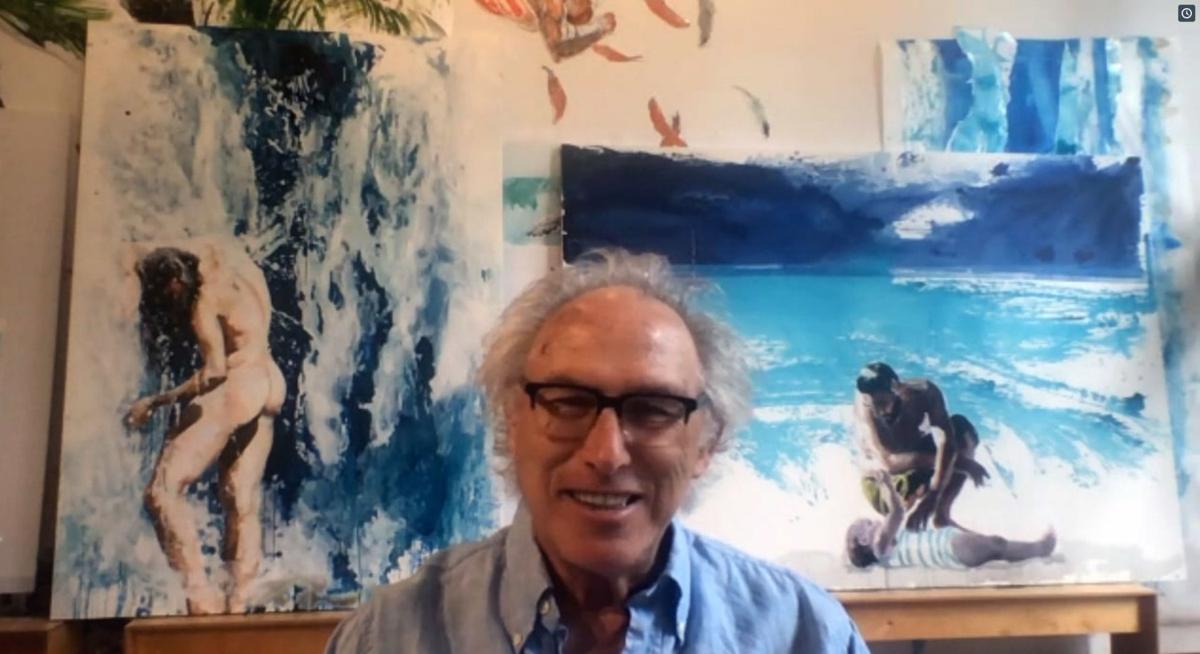 “It’s been lovely going to sleep with my paintings ... Everything I want in the whole world is my work.” — English artist Tracey Emin.

“I try to put myself to one side and deal with the picture itself.” — Peter Saul.

The videos run between 5 and 10 minutes.

I started with Tracey Emin. I wasn’t familiar with the English artist. I looked her up and found she had a Wikipedia page, and that people think of her work as shocking. But she says it really isn’t — “I’ve always used myself as subject matter, and my work has always just been a journey for me.”

Some of her pieces are fragments of writing in neon on a black background, like “What color is a kiss?” with a hot pink X next to it. Another is a sketch of a bird on a branch traced over in bright blue neon. Her paintings bear a sketched quality as well, just enough to make out what you’re seeing.

Emin, 57, has been painting for about 10 years. Since lockdown she has been sleeping in her studio. “It’s been lovely going to sleep with my paintings. ... Everything I want in the whole world is my work.”

She is one of the participating artists in a video series called “America Now! Some Artists’ Reactions” presented by Hall Art Foundation, an international arts organization with a center in Reading, about 35 miles outside Rutland.

“We are in the midst of an important time in this country’s history, and we want to provide a platform for the voice of American artists, or artists who are or have worked in America,” said Maryse Brand, director of Hall Art Foundation.

The series offers insight from interesting artists, who were each posed the same five questions — some biography, some information about their work, what they love about this country, their views about what’s happening here now and how it’s impacting their work. Each artist submits their answers in a video taken at home or in their studio. The result is a fascinating and personal dialogue.

Eric Fischl, 72, an American painter, sculptor, printmaker, draughtsman and educator, is known for his paintings depicting American suburbia from the 1970s and 1980s.

In his video, two are visible. One is a woman skinny-dipping in a waterfall. The other is of a man on a beach, having a moment with a child, a stormy sky behind them.

“I paint people,” Fischl says. “And I paint people who are doing things. And I try to figure out through the painting what they’re doing.”

“I’m trying to get to meaningful moments,” he added.

“What I love about America is that it’s always in a state of becoming,” Fischl said. “It redefines itself over and over.” His comment on the current situation: “I think we’re frightened, and I think we’re behaving the way people who are frightened behave.”

When asked what kind of insight they hoped to find through the questions posed to the artists, Brand said: “How current events are impacting their work, their lives and also their broader views about America. We also thought it was important to hear what each artist loves about America, and which presumably they consider as something to be proud of and worth protecting and preserving.”

A painting of a woman puking cash, pushing a giant fork with chocolate cake into a man’s head with the caption “I’m not your piece of cake” sits in the background of artist Peter Saul’s video. Another depicts a person in a graduation cap and gown, the background full of scattered math equations, none of which add up.

“I try to put myself to one side and deal with the picture itself,” he said of his politically infused paintings that have a signature exaggerated effect in color and shape.

Hall Art Foundation in Reading holds seasonal, rotating exhibits of contemporary art, but the converted dairy farm closed its doors for the whole of 2020. The “America Now” video conversation series was its way to address and express the current situation.

“We are deeply grateful to the artists who have agreed to participate,” Brand said, “for their honesty and openness in sharing their unfiltered views about current events and for letting us into their studios to better understand their process and get a glimpse of the new work they’re making.”

“(We) started by approaching artists with whom we have worked in the past,” she said. “We hope to continue the series through the November elections. New videos by different artists will be released periodically until then.”