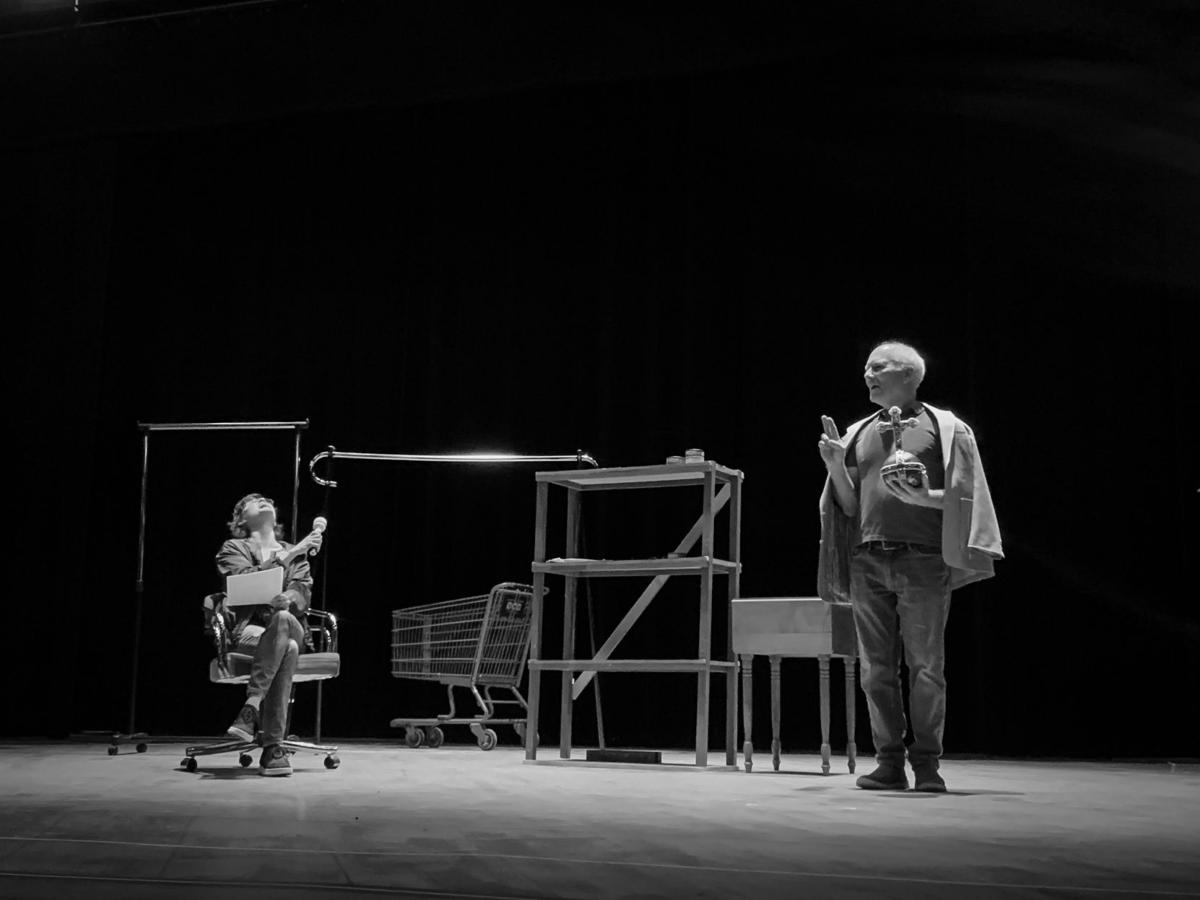 Mary Bacon and Dan Butler rehearse a scene in Dorset Theatre Festival’s production of “Laughing Wild,” by Christopher Durang, to be presented July 9-31 in person on its outdoor stage at the Southern Vermont Arts Center in Manchester.

Mary Bacon and Dan Butler rehearse a scene in Dorset Theatre Festival’s production of “Laughing Wild,” by Christopher Durang, to be presented July 9-31 in person on its outdoor stage at the Southern Vermont Arts Center in Manchester.

Laughter may well be the best medicine and Dorset Theatre Festival is inviting its audience back to in-person theater after a year’s hiatus with lots of it — and a bit more.

The acclaimed southern Vermont professional theater company will open its 44th season with a revival of Christopher Durang’s satirical comedy “Laughing Wild” July 9-31 outdoors at the Southern Vermont Arts Center in Manchester, instead of its home at the Dorset Playhouse. On-demand streaming will also be available for patrons who are unable to reschedule if they miss a performance due to weather conditions.

“I am actually excited to be doing this play from every angle I look at it,” explained Jade King Carroll, Dorset’s resident artist who is directing.

“But the thing I’m most excited about is laughing together with the community — hopefully providing some laughter and reflection.”

The 1987 comedy in three parts follows a man and a woman struggling to cope with life in modern America. Through the course of two monologues and a chance meeting inside a dream, the characters take on everything from the supermarket to nuclear waste to their own frenetic psyches.

“I think it’s really funny, I think it’s fun, I think it’s timely,” Carroll said. “It looks at daily life and the banality in a great way, in a fresh light. Even though it was written in 1987, it’s kind of a prophetic piece.”

New York Times theater critic Charles Isherwood, in a review of Boston’s Huntington Theater Company’s 2005 revival, described “Laughing Wild” as “a duet for two merry misanthropes, one cackling mad, the other more quietly unmoored. They meet in dreams and nightmares, vying for our laughter and compassion, hoping to lead us, if only briefly, to peace with the world’s outrages.”

“It’s going to be great to see the actors in those roles,” Carroll said. “Just bringing it to life — and going back to ’87 at the same time — reveals it’s a play that looks at where we are in the country and the community.”

Comparisons have been drawn between “Laughing Wild” and the works of Irish absurdist playwright Samuel Beckett. Its title was inspired by a line from Beckett’s “Happy Days,” “laughing wild amidst severest woe,” and its opening monologue might well be satirizing Winnie’s in the Beckett play.

“It’s an extremely challenging play in just how dense it is, and its specificity and honesty,” Carroll said. “It’s not a challenge for these actors, but it’s yeoman’s work. They’re fantastic actors. It’s just being really specific about what the lines are. It’s all in between — it’s really dense.

“And that’s not challenging in a negative sense,” Carroll said. “It’s what makes it rewarding in the work and energy it requires. It requires an intense amount of energy.”

For Carroll, “Laughing Wild” is an ideal response to coming out of the COVID-19 after all the time spent alone.

“A lot of the piece, in a very comedic way, is about connecting with people — seeing people, how we take each other in and how we breathe together — in a grocery store, or in the middle of a pandemic. It’s very timely in how it’s asking you to look at being with people,” she said.

“I hope people will laugh, that’s my biggest hope,” Carroll said. “My hope is that people will come back to the theater and have a good time laughing together —with the experience of being together.

Dorset Theatre Festival presents Christopher Durang’s comedy “Laughing Wild” July 9-31 outdoors at the Southern Vermont Arts Center in Manchester. Performances are at 8 p.m. Tuesdays, Wednesdays, Fridays, Saturdays and Sundays. All tickets are $45 (plus tax and fees); call 802-867-2223, or go online to dorsettheatrefestival.org On-demand streaming will also be available for patrons who are unable to reschedule if they miss a performance due to weather conditions.