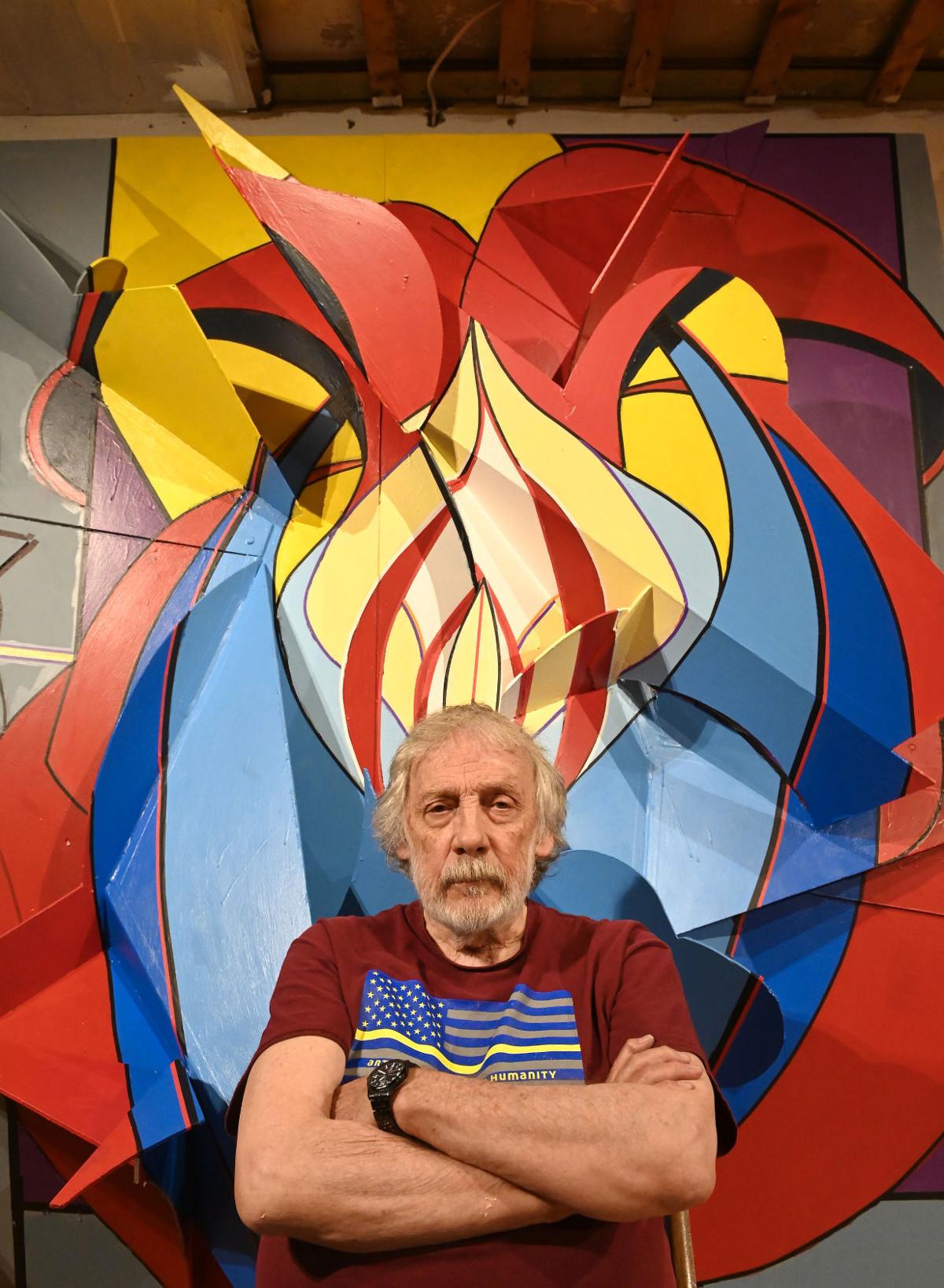 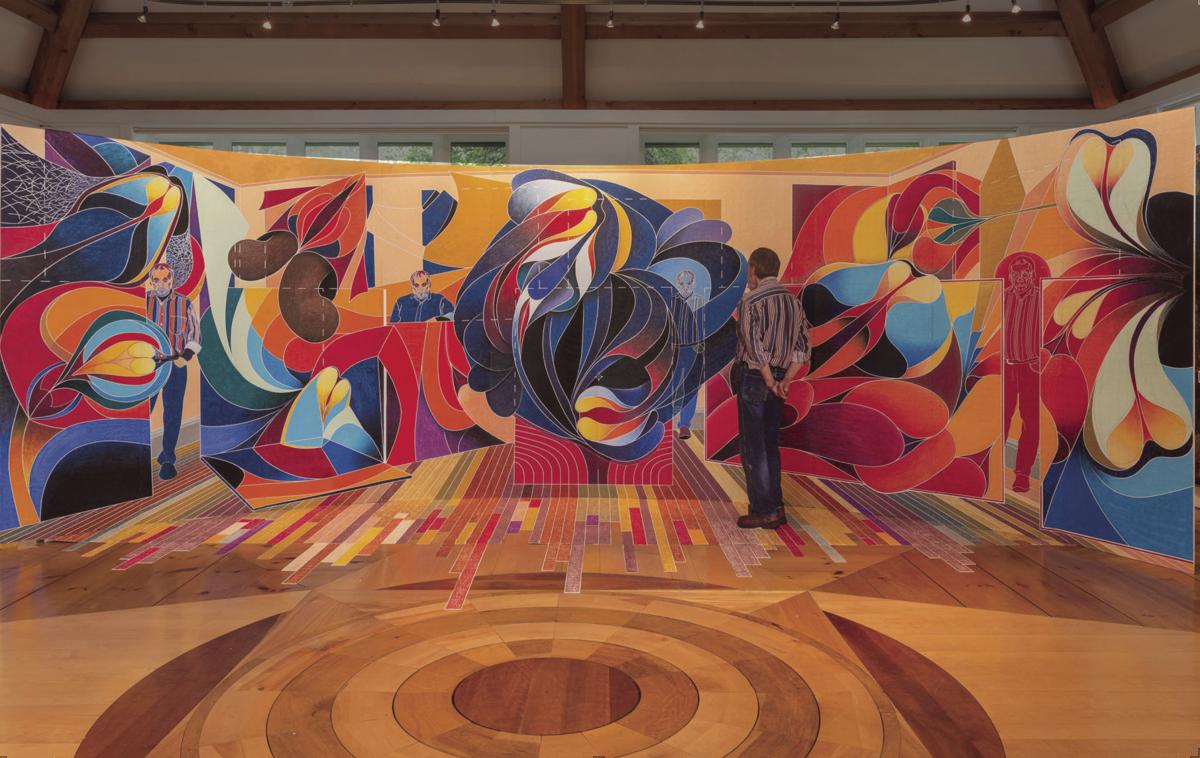 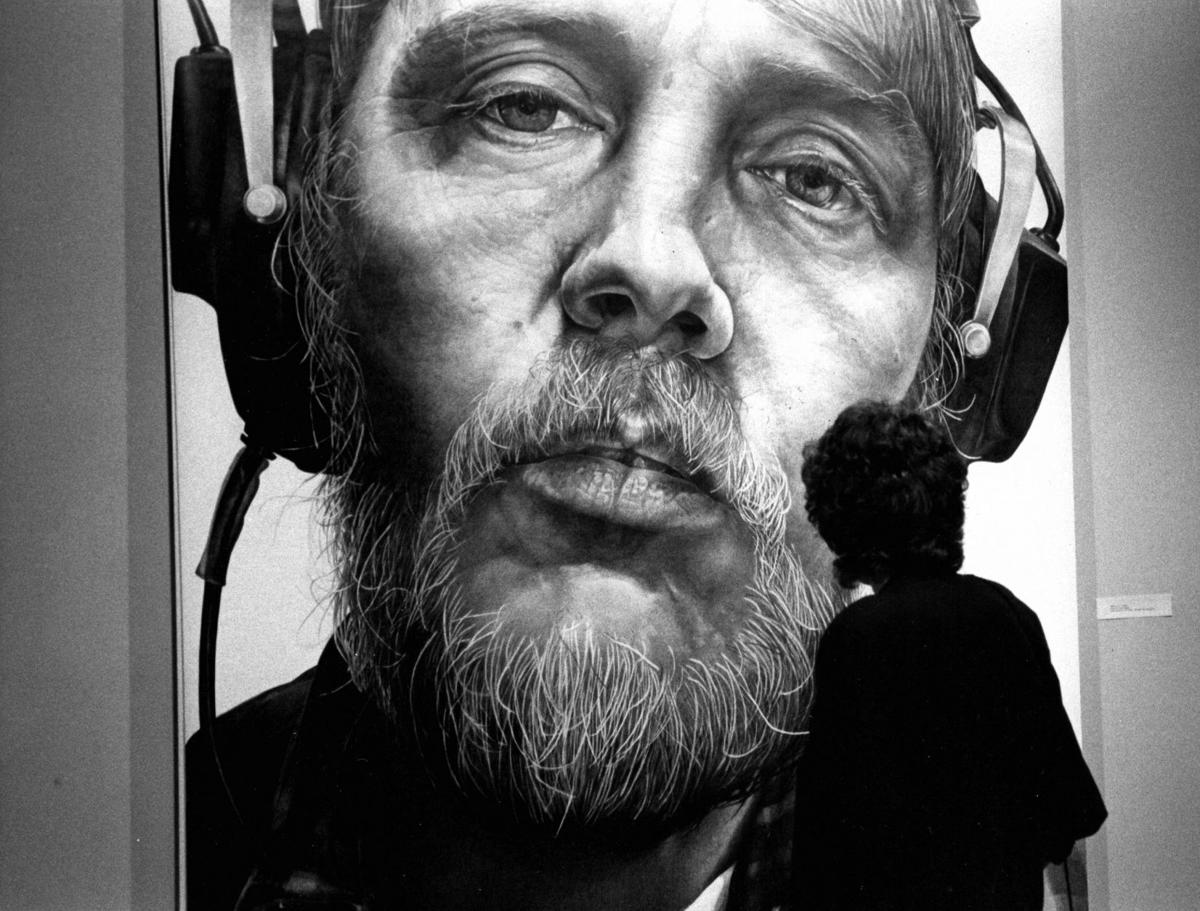 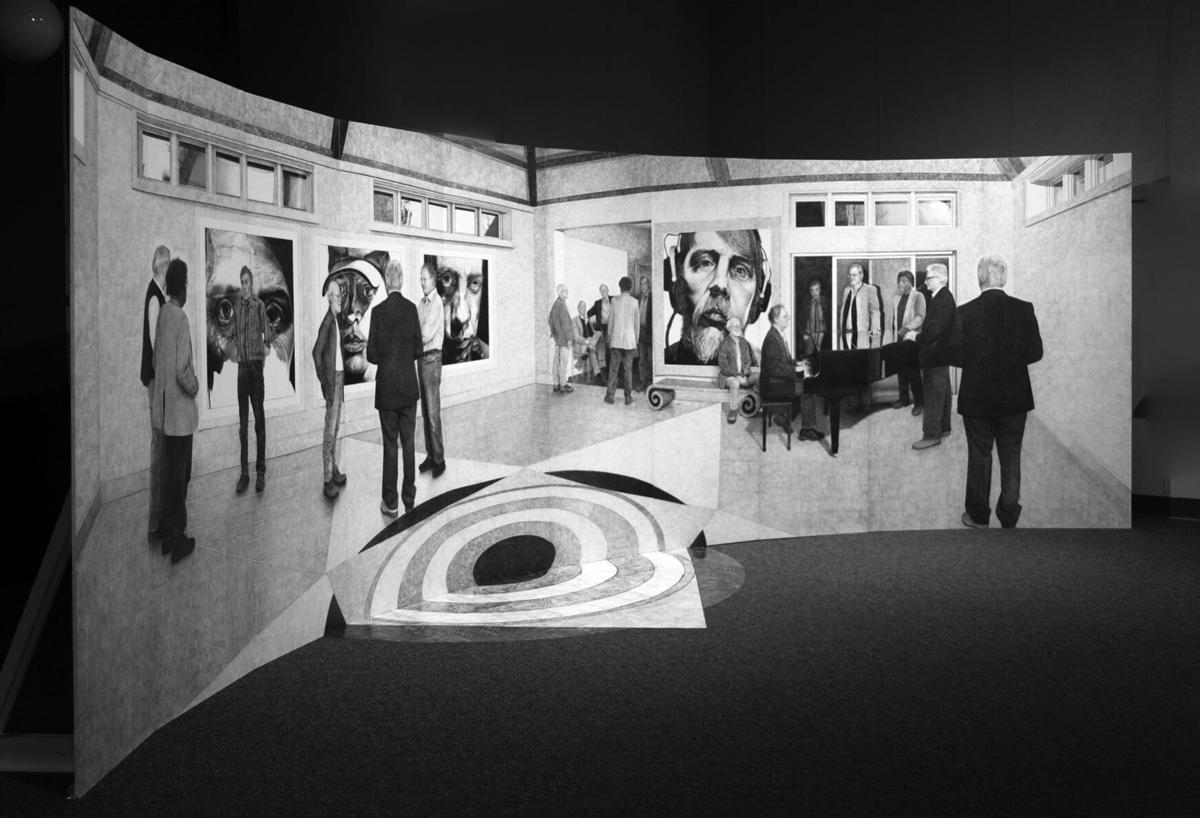 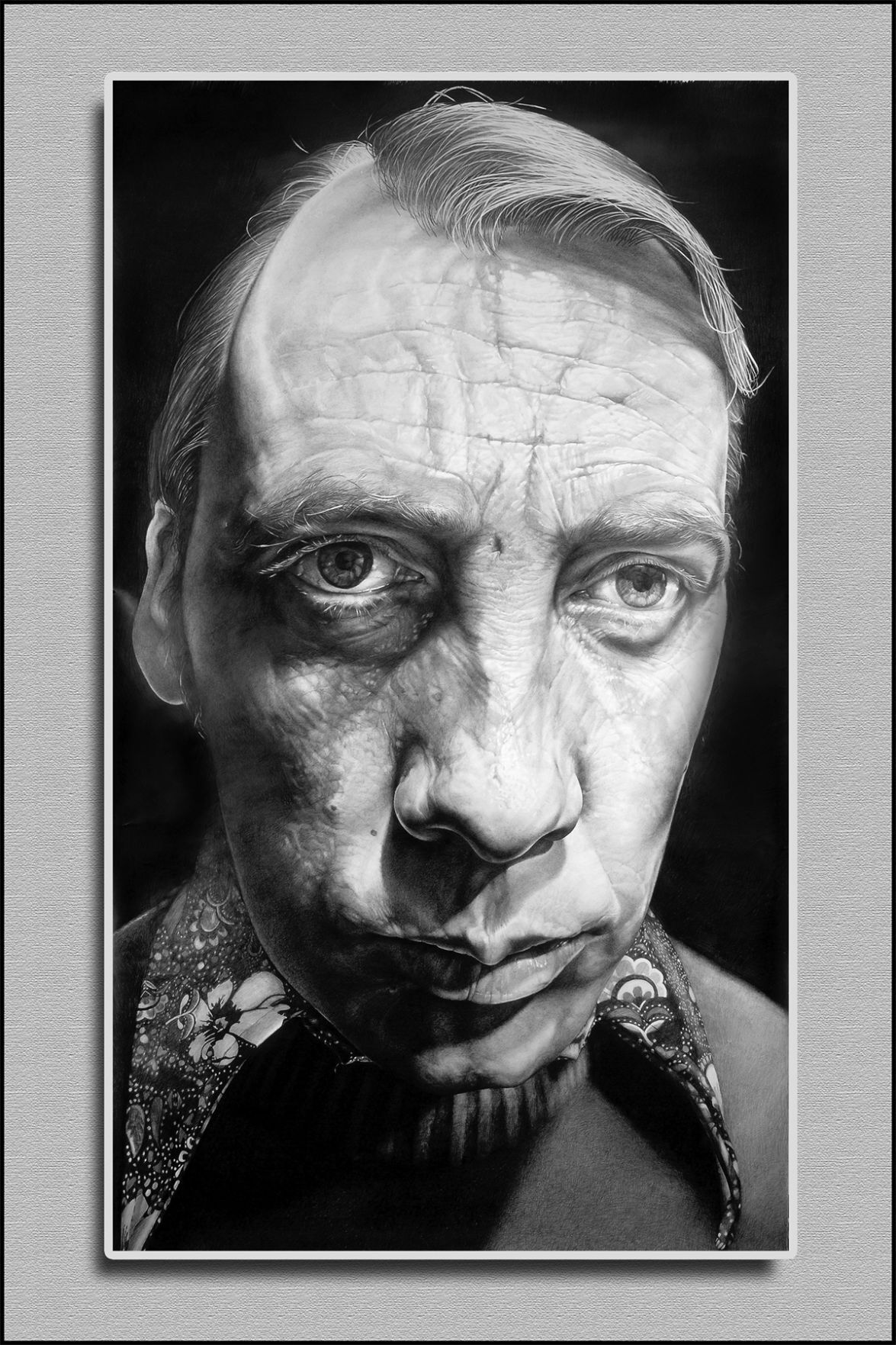 When encountering Bill Ramage standing in front of his enormous 9-by-43-foot Rutland drawing/sculpture in the Rutland Opera House, it’s hard not to think that he possesses some magical qualities to be able to pull off such a feat. He is using a unique way of seeing, centripetal perspective, as opposed to the more common linear perspective, to create large installations that include the viewer. Ramage has spent years exploring this unique visual theory through 8-foot-high drawings of faces, and enormous drawing and photo-sculpture installations.

Ramage is one of the strongest local forces for connecting art to community. His name is synonymous with the evolution of several art venues as part of what has been called the “Rutland Renaissance.” These include Center Street Alley Gallery, Castleton Bank Gallery, 77Art and the Opera House Exhibition spaces.

Originally a professor at Ohio State University when the four Kent State students were killed by National Guardsmen during an anti-Vietnam War demonstration, he left to become a professor at Castleton University, a post that he held for 35 years.

In tandem with being a dedicated, supportive and innovative teacher, Ramage was continually creating his own artwork that evolved from his fairly traditional training in drawing and sculpture to large scale experimental installations, which have been shown worldwide, including an invitation from the Ukrainian Union of Artists/Sovgart in Kiev, Ukraine.

Other major exhibits and awards include the New England Regional Selections Award and Exhibition at the Hood Museum at Dartmouth, Williams College Museum and the DeCordova Museum in Massachusetts, UVM Fleming Museum in Burlington, Gallery in the Field, and Compass Music and Arts Center in Brandon. The majority of Ramage’s legacy resides in the Northern New England Museum of Contemporary Art (NNEMoCA), founded by Mark Waskow, in Burlington.

Ramage is an unusual mix of theoretician, pragmatic experimenter, exceptionally skilled artist and arts advocate. His ability to combine drawing, sculpture and photography is truly unique. We are fortunate to be the benefactors of his seemingly unstoppable creativity and generous sharing. I’d like to pose a few questions that might elucidate some of his processes.

B.A.: Can you talk about your evolution as an artist? You say that you started when you were 7.

B.R.: I have made things seriously since I was 7. But the day I entered college, making art became my life’s priority and purpose, a lifelong commitment. Prior to my 30s, I thought that this commitment to art-making meant that I was actually making art. I certainly committed a lot of time, passion and energy into it, and I made, what now seems like a lot of capable, but pointless things that were convincing enough to land a good university teaching position.

B.A.: What would you say are the key influences in your work?

B.R.: Primarily art history. When I was a student, I’d made up art history songs. i.e. (to the tune of “Joshua Fought the Battle of Jericho”) You can talk about Piero Della, / You can know about Masaccio, /But when you talk about the 19th century, / Well, there is one thing you gotta know. / Oh, Delacroix was better the Gericault, Gericault, Gericault. etc.

B.A.: So, how did your process evolve from drawing and sculpture into the larger room-size installations?

B.R.: I had always involved myself in the empirical aspect of my art making in terms of trying to be straightforward and honest about what I was seeing. I have this compulsive desire to avoid deception at all cost. I realized that deception was an issue when modeling clay portraits. I always felt compromised when trying to sculpt the eye’s iris and pupil. They were not three-dimensional and you needed to lie in order to present them sculpturally.

It occurred to me that I needed to start by exploring what I thought might be some uncharted landscapes of seeing. It started by drawing heads, although it was unbeknownst at the time, facial recognition is the most complex and demanding perceptual function the mind has to accomplish.

B.A.: How did you start the exploration, and where did it take you?

B.R.: For two years, I drew increasing larger drawings to meet the demands of an increasing visual acuity until I got to a 5-foot by varying heights format that allowed me to vastly expand the amount of information I could observe and record through drawing. This activity became a four-year perceptual probe involving a series of four large drawings that I called “Empirical Studies.” The objective was to make articulate perceptual observation without any deception, assumptions, or learned drawing skills … no lies.

Each drawing took about a year. While working though these drawings I was searching for some useful questions, theories, hypotheses, anything that could shine some light on my uncharted landscapes of seeing. It was a very demanding and obsessive process.

What I was experiencing in creating “Empirical Study III” was the total dissolution of everything I knew about seeing. I was seeing things I had probably always seen without any awareness that I had been seeing them. For the first time in my life I was consciously experiencing something completely new and different. It was an intense and moving experience, and my professional life has not been the same since. It was a perception where everything was in flux and there was not a fixed visual certainty. It became a reasonable possibility that the assumption of a fixed visual certainty was just a construct, something we make up: a useful way to organize visual information. It was not real!

B.A.: So in these “Empirical” drawings, you were translating a 3-D object, the face, into a 2-D drawing on paper. Your installations seem to explore the reverse — to play with taking a 2-D drawing and fitting it into a 3-D space. You developed a whole new theory of perception, “Centripetal Perspective,” which informed this.

B.R.: When we engage in the act of seeing, there are two functions of that activity occurring simultaneously and symbiotically. There is the peripheral vision that involves the entire field of vision, and there is the fovea that is the very small part of the perceived space that is in focus. For the most part, we are not aware of this dual-synchronized function of seeing.

We typically look at a space using linear perspective to perceive depth and distance. However, linear perspective (one, two, three-point perspective) is an invented construct created by Filippo Brunelleschi around 1420. I’ve invented a system called “Centripetal Perspective” that concentrates on foveal seeing, which originates in the mind of the observer and puts the vanishing point behind the eyes of the perceiver, then projects that mind out into what becomes a visual world.

The fovea constantly connects, synthesizes and stitches together the images that are produced in the mind. “Centripetal Perspective” moves the focus to the center of every perception … that is, into the mind of the observer. This is where seeing — a living thought experience — ought to be. You are the center of your perception and not some vanishing point on a mythical horizon line.

B.A.: The “Rutland Drawing: A Post Piero Ideal City” is a “mind-bending” installation. I feel that it should be a permanent installation as a tribute to the city. What inspired you to create, what I consider to be, your masterpiece?

The drawing-sculpture process begins with photographic, what I call ‘foveal’ slices of a scene. The camera stays in exactly the same spot, turning incrementally to photograph sequential sections of a scene. The digital photos are then knit together by the computer to create a kind of panoramic vision in “Centripetal Perspective.”

I worked on the “Rutland Drawing” for almost 2½ years using pencil on gatorboard, which is a stiff drawing surface. This meant spending a lot of time looking at Rutland architecture. I’ve lived in the Rutland area for about 50 years, and in all that time I never noticed how beautiful its 19th-century architecture is, with all its incredible craftmanship. That was because I always navigated Rutland at eye level and I rarely, if ever, looked up at the architecture with a discerning eye.

B.A.: I notice that you often put a life-size cutout of yourself, and others, in the drawing and photo/installations. When viewing one of your drawing/installations, I feel as if I’m one figure in a three-dimensional space, but I’m actually looking at a drawing. How do you accomplish this effect?

B.R.: “The Rutland Drawing” is a life-size drawing. The cut-out is there to demonstrate that it is life-size. No matter where in the space you place the cut-out, it is visually neither too large nor too small for the drawn image of Rutland. The point being, that when you are viewing the drawing, what you visually experience is exactly what you would see if you were standing on the corner of Depot Park.

It’s drawn to your (the viewer’s) physical scale. “The Rutland Drawing” is really about you in the space and the experience of being in the space. “The Rutland Drawing” is a sculpture more than it is a drawing because it is about visual time and space rather than an image. The image is just a means to provide the experience of being in a life size image of Rutland. The piece is really all about the space within the half-cylinder format.

B.A.: I’ve often heard you say that “art can save the world.”

B.A.: Clearly, your belief in the power of art has inspired the “Art is Vital” movement in Rutland. How do you see art as a positive force?

B.R.: Historically it’s been the case that art and a community’s wellbeing can be symbiotic. There are many examples of this from Brandon, to the Chelsea section of Manhattan and now Brooklyn. Why not Rutland?

B.R. Here’s a thought for you: In the truest sense of the word, calling myself an artist might not be apt. I would go so far as to say, I mostly use art because it is my first language and the medium most suitable to my designated task. If the truth were to be known, I consider myself to be as much a theorist and a soothsayer as a visual artist.

RUVT Gallery presents “The Rutland Drawing,” installation by Bill Ramage, ongoing, at the Rutland Opera House, 59-67 Merchants Row, Rutland; call 802-468-1266, or go online to www.castleton.edu The building is temporarily closed due to COVID-19.